In Memory of Lew Millett

In Memory of Lew Millett

Even though Colonel Millett was not a Canadian, I thought he deserved mention on this forum. He is the only Medal of Honor Recipient to be court-martialed for desertion from the US Army in order to join the Canadian Army. Even though I knew Lew, I will let the following serve as his memorial.

Medal of Honor recipient remembered as a man who loved his country
By Andie Hannon, Staff Writer
Published: Nov 17, 2009 12:00 am

Local family members of Col. Lewis Millett remember the former Mechanic Falls man as someone who proudly served his country even long after his retirement from the military.

"He was a very proud man and very proud of his country," said Alice Pepin, 75, Millett's younger sister who lives in Turner. "He felt very strongly about defending his country. He was very involved, especially with the young people involved in the army."

Millett, 88, of Idyllwild, Calif., formerly of Maine, died Saturday morning at Jerry L. Pettis Memorial Veterans Administration Medical Center in Loma Linda, Calif., following a series of health problems in the last five years, according to an article that ran Saturday in The Press Enterprise, a Riverside, Calif.-based newspaper. He was born in Mechanic Falls on Dec. 15, 1920.

Millett received the nation's highest military award — the Medal of Honor — in 1951 for leading a bayonet charge during the Korean War. According to a profile piece on dailynightly.msnbc.msn.com, Millett earned the honor for his heroic actions during the Korean War. After learning that Chinese Communist soldiers were distributing propaganda that American soldiers feared the bayonet, he rigorously trained his troops in hand-to-hand combat using the weapon.

A few weeks later, his men found themselves outnumbered by Chinese Communist soldiers near the Korean village of Soam-ni. With his troops already running low on manpower and facing a shortage of ammunition, Millett ordered his men to fix bayonets and then personally led the uphill charge against the Communists — reaching the enemy trench line and killing two enemy soldiers.

His was the last bayonet charge in U.S. military history, and stymied the Chinese soldier's relentless effort to capture his troops.

"His men idolized him," Pepin said of the big brother who used to carry her around department stores on his shoulders. "He always told you exactly how he felt. He didn't mince words."

Cindy Larrabbee, 65, of Mechanic Falls, said Millett traveled with Hollywood stars on several U.S.O. tours following his retirement from the military. She said the former military standout didn't perform on the tours, but rather spent time talking with and encouraging the next generation of young soldiers.

Larrabbee is married to Millett's nephew, Douglas, and said she always admired "Uncle Lewis" for his patriotism and love of history. She said his California home was filled with artifacts, collectibles and pictures from around the globe.

"You talk about a picture being worth a 1,000 words, well there must have been 15 million words in that house," Larrabee said.

But Millett's rise to glory was almost cut short in the early 1940s after he was court-martialed and found guilty of desertion. According to the dailynightly.msnbc.com profile of the former foreign war hero, Millett was so impassioned to fight against Hitler's Nazi forces that he deserted the United States in 1940, fled to Canada and enlisted with the Canadian Army when it appeared that the nation was going to remain neutral.

By the time American troops began arriving in England in 1942 shortly after the Japanese attack on Pearl Harbor, Millett transferred to the U.S. military. He earned the Silver Star for his service in North Africa before going on to fight in Salerno and Anzio. Around the same time he was received a battlefield promotion to lieutenant for his combat fearlessness, Millett learned he also owed Uncle Sam a $52 fine — his sentence for being found guilty of desertion.

He was the only colonel in American history found guilty of desertion at the time of his retirement in 1973.

Following his stint with the Army during World War II and prior to his fighting in Korea and earning the Medal of Honor, Millett returned to Maine, joined the state's National Guard and attended Bates College.

He and his wife, Winona, who died in 1993, are survived by two sons and a daughter. A fourth son, Sgt. John Millett, died in the tragic December 1985 plane crash off Newfoundland that claimed the lives of 256 people — 248 of which were soldiers returning home from the Middle East on Christmas leave.

"It's a great honor to have a gentlemen who could serve his country in such a way," said Gary Purrington, a Mechanic Falls resident who served six years in the U.S. military and had the occasion to meet Millett. "He was very dedicated to the people he met and shared a lot of Americanism with them." 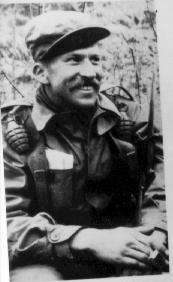 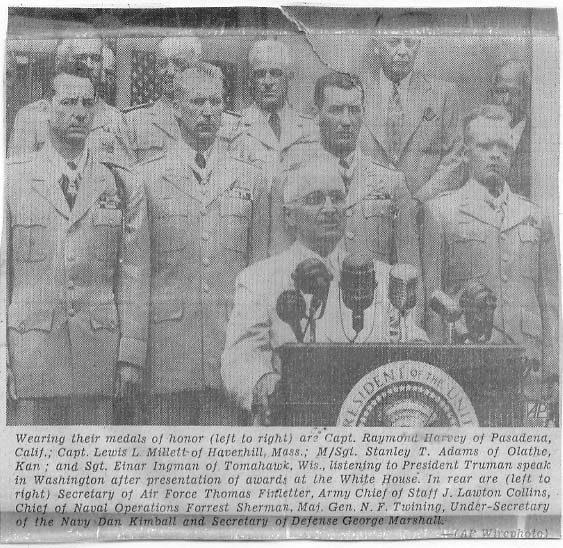 Captain Millett at the White House receiving the MOH from President Truman. 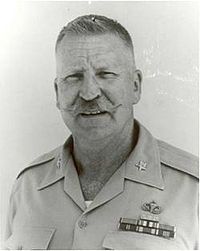 RANK AND ORGANIZATION: Captain, U.S. Army, Company E, 27th Infantry Regiment.
BORN: 15 December 1920, Mechanic Falls, Maine.
ENTERED SERVICE AT: Mechanic Falls, Maine.
PLACE AND DATE: Vicinity of Soam-Ni, Korea, 7 February 1951.
CITATION:
Capt. Millett, Company E, distinguished himself by conspicuous gallantry and intrepidity above and beyond the call of duty in action. While personally leading his company in an attack against a strongly held position he noted that the 1st Platoon was pinned down by small-arms, automatic, and antitank fire. Capt. Millett ordered the 3d Platoon forward, placed himself at the head of the 2 platoons, and, with fixed bayonet, led the assault up the fire swept hill. In the fierce charge Capt. Millett bayoneted 2 enemy soldiers and boldly continued on, throwing grenades, clubbing and bayoneting the enemy, while urging his men forward by shouting encouragement. Despite vicious opposing fire, the whirlwind hand-to-hand assault carried to the crest of the hill. His dauntless leadership and personal courage so inspired his men that they stormed into the hostile position and used their bayonets with such lethal effect that the enemy fled in wild disorder. During this fierce onslaught Capt. Millett was wounded by grenade fragments but refused evacuation until the objective was taken and firmly secured. The superb leadership, conspicuous courage, and consummate devotion to duty demonstrated by Capt. Millett were directly responsible for the successful accomplishment of a hazardous mission and reflect the highest credit on himself and the heroic traditions of the military service.
Battalion Colours

While still attending high school in Dartmouth, he enlisted in the Massachusetts National Guard in 1938 and joined his uncle's old regiment, the 101st Field Artillery. In 1940, he joined in the United States Army Air Corps and entered gunnery school. When it appeared that the U.S. would not enter World War II, Millett, eager to fight, deserted in mid-1941.[1][3] With a friend who had received a bad conduct discharge from the U.S. Marine Corps, Millett hitchhiked to Canada and enlisted in the Canadian Army.[2] Assigned to the Royal Regiment of Canadian Artillery, he was sent to the United Kingdom, where he served as an anti-aircraft radar operator in London during the Blitz.[2][3] By the time he arrived in the United Kingdom, the U.S. had entered the war; Millett transferred to the U.S. Army in 1942.[2][1]
Assigned to the 27th Armored Field Artillery Regiment, 1st Armored Division, Millett served in Tunisia as an anti-tank gunner.[2][3] During an engagement there, he drove a burning ammunition-filled half-track away from Allied soldiers, jumping to safety just before it exploded. For this action, he was awarded the U.S. military's third-highest decoration, the Silver Star. He later shot down a Messerschmitt Me-109 fighter plane using half-track mounted machine guns.[3]
Millett, by then a sergeant, next took part in the Allied invasion of Italy at Salerno and the subsequent Battle of Anzio.[1][3] It was at this time that the U.S. Army discovered Millet's 1941 desertion; he was court-martialed, convicted, ordered to pay a US$52 fine, and stripped of his leave privileges.[2] Only weeks later, he was given a battlefield commission to second lieutenant.[3]

After World War II, Millett attended Bates College in Lewiston, Maine, for three years before being called up to serve in Korea. Over a decade later, in the 1960s, he earned a bachelor's degree from Park College (now known as Park University) in Missouri.[2]
By February 7, 1951, Millett was serving in Korea as a captain and commander of Company E of the 27th Infantry Regiment. On that day, near Soam-Ni, he led his company in an assault on an enemy position atop Hill 180. When one platoon became pinned down by heavy fire, Millett took another platoon forward, joined the two groups, and led them up the hill. Wielding his bayonet and throwing hand grenades, Millett yelled encouragement to his soldiers throughout the hand to hand fight. Upon reaching the top of the hill, his men stormed the enemy position and forced the opposing soldiers to withdraw. Although wounded in the shin by grenade fragments, Millett refused to be evacuated until the position was secured.[3][4] Historian S.L.A. Marshall described the attack as "the most complete bayonet charge by American troops since Cold Harbor."[2]
For his leadership during the assault, Millett was awarded the Medal of Honor. The medal was formally presented to him by President Harry S. Truman in July 1951.[1] He was also awarded the Army's second-highest decoration, the Distinguished Service Cross, for leading another bayonet charge in the same month.[

After the Korean War, Millett attended Ranger School at Fort Benning, Georgia. He was assigned to the 101st Airborne Division as an intelligence officer and later served in Vietnam as a military advisor to the controversial Phoenix Program, which aimed to root out and kill Viet Cong sympathizers. He also helped found a "Recondo" (reconnaissance-commando) school to train small units for service in Vietnam.[3] In the mid-1960s, he commanded the Army Security Agency training center at Fort Devens, Massachusetts.[2]
Millett retired from the military in 1973 at the rank of colonel.[1] He later stated that he retired because he felt the U.S. had "quit" in Vietnam.


*Note: If memory serves me right, Lew was one of the oldest, if not the oldest soldier to attend Ranger School.
**Note: You could write a book about Lew's tour with the Phoenix Program.
Sponsored content