"The world's last known combat veteran of World War I, Claude Stanley Choules, has died in Australia aged 110.
Known to his comrades as Chuckles, British-born Mr Choules joined the Royal Navy at 15 and went on to serve on HMS Revenge.
He moved to Australia in the 1920s and served in the military until 1956." 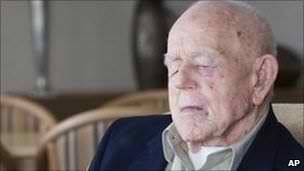