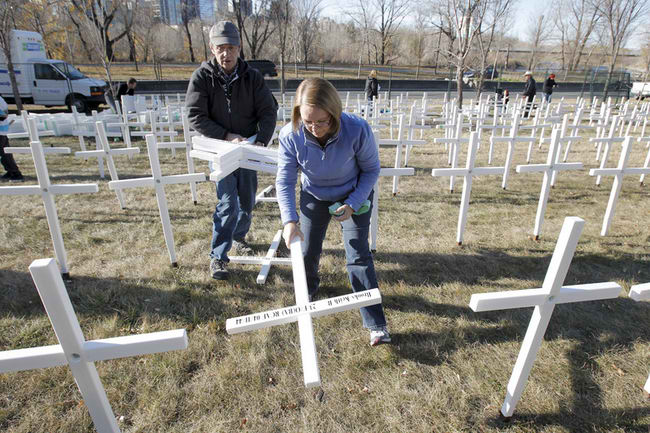 Volunteer Jan Helm sets crosses into place alongside Memorial Drive in Calgary on October 29, 2011. This year, volunteers will set up 2,700 crosses, each bearing the name of an Albertan soldier killed while serving. (LYLE ASPINALL/CALGARY SUN)

Dozens of volunteers toiled with the sombre task of erecting 2,700 white crosses along Memorial Dr. Saturday, a growing tribute to represent Albertan soldiers who have fallen since the Boer War.

The work endured just as details emerged of yet another Canadian solder killed in Afghanistan.

Master Cpl. Byron Greff from the 3rd Battalion Princess Patricia’s Canadian Light Infantry was one of 17 killed when a Taliban suicide bomber rammed an explosives-laden vehicle into an armoured bus carrying NATO soldiers.

Most of the volunteers working on the Memorial Drive project are veterans themselves, including Dave Leitch who served in the Canadian air force.

“It’s too bad ... but the purpose of this is to focus on the willingness of these young people to stand up and take on the terrible job they had to do and do it so very, very well,” he said.

The number is expected to double as organizers carry on with their task of confirming the number of Alberta’s war dead.

Once the crosses are up on the north side of Memorial Dr. near the Calgary Curling Club, a flag ceremony will be held at sunrise and sunset each day during Remembrance week.

Among the rows, Leitch came across the names of soldiers he knew personally.

“That’s the best way to describe it, when you see a name you know, it’s tough.”

The crosses will remain standing until the weekend after Remembrance Day.

Re: Memorial Drive Crosses A Reminder Of Alberta's Heroes

What a great tribute! Should make the trip down south from edmonton to see that. Had a 2 cousin ROBERT WAUGH from Brooks Alberta, would make the trip well worth it. He was with the Royal Regiment of Canada,killed in action near Caen on aug 29 1944 he was only 18 years old.
Current date/time is Wed Jun 23, 2021 2:12 am