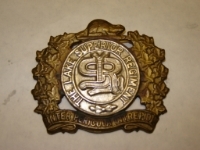 « Back
A cycling trip to remember
VETERANS: Young adults needed for European journey
Posted 13 days ago

In order to keep the history of their ancestors alive, young people are being sought for a remembrance cycling trip.

The Frank Graham Cycle Liberation Tour takes place in France and Holland in April 2013, following the same route the Allies did.

Dottie Laurie, of Chatham, is the local representative looking for participants in this unique experience.

"This is an amazing opportunity for young adults in Chatham," she said.

Graham, of Midland, Ont., is a Second World War veteran who still maintains a bond with the people in Holland.

There are 24 available spots across the province, eight of them in Chatham-Kent. They will be joined by 24 Dutch riders.

Places on the 700-kilometre route include Juno Beach, Vimy Ridge, Ardennes and Markelo, among other sites.

Transportation will be arranged to cross the larger distances in between.

With the dwindling number of veterans, Laurie said the goal is to reach out to youth so they can pass down the stories of sacrifices made.

"We were trying to think of a way of commemorating to keep the memory alive," she said.

Anyone interested must be between 18 and 28 years of age (during the ride); a direct descendant of a veteran in any conflict; physically able to ride; have a sponsor; and submit an essay.

"As the committee, we're hoping to raise the remainder of it," Laurie said.

Laurie, who will be riding as well, is a former major in the reserves and has been involved in the cadet program.

The Branch 28 Royal Canadian Legion Pipe Band will also be in Markelo for the event.

As her husband Dick Laurie is in the band, she already had the chance to visit Holland, saying many of its people are like family.

"This is really an honour for me to be involved in this," she said.

For information on participating, or to be a sponsor, e-mail Laurie at iluvjuicy@msn.com, visit www.cycleliberationtour.nl, or search "Frank Graham Cycle Liberation Tour 2013" on Facebook.