Canadian Recipients of the Medal of Honor

Canadian Recipients of the Medal of Honor

Canada and the United States... What do we have in common?

But for all our difference, there are many things we have in common. One thing we share with the Americans is their Medal of Honor (Honour) recipients.

There are 54 "known" Medal of Honor recipients who are or were from Canada.

There are five MOH recipients buried in Canada including:


The following Canadians were awarded the MOH during the 19th Century:

The first citation reads: Serving on board the U.S.S. Kearsarge, at Hampton Roads, Va., 26 October 1881, Sweeney jumped overboard and assisted in saving from drowning a shipmate who had fallen overboard into a strongly running tide.
The second reads: Serving on board the U.S.S. Jamestown, at the Navy Yard New York, 20 December 1883, Sweeney rescued from drowning, A. A. George, who had fallen overboard from that vessel.

PETER LEMON is currently an inspirational speaker in Colorado but he was born in 1950 in Toronto, Ontario. He was awarded the MOH in 1970 for his actions in Vietnam.

More recently, JOHN McDERMOTT (www.johnmcdermott.com), one of the nicest singing voices to come out of the Toronto SUN news room, was awarded the Bob Hope Award by The Congressional Medal of Honor Society on October 29, 2001, for his many years of providing entertainment to U.S. Veterans. If you have never heard John sing, you are missing something. Every year he gives a concert in Ottawa with the proceeds going to the Canadian War Amputees.

JOSEPH B. NOIL, born in 1841 in Nova Scotia, is the only Canadian-of-colour to receive a MOH. On December 26, 1872, while serving aboard the USS Powhaten, Noil saved Boatswain J.C. Walton from drowning.

On January 8, 1878, WILLARD and HARRY MILLER of Noel Shore, Hants Co., Nova Scotia, while serving aboard the USS Nashville, pulled off an impossible mission under heavy gunfire in a Cuban bay. The Miller brothers became the first set of brothers to ever be awarded a MOH. You can find out more of this mission at: http://www.powmia.ca/miller/dailynews.html 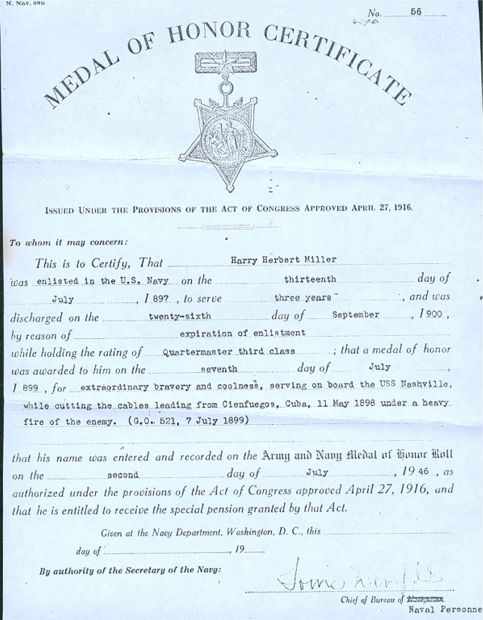 CHARLES A. MacGILLVARY moved from Prince Edward Island, at the age of 16, to live with his older brother in Boston. Following the attack in Pearl Harbour in 1941, MacGillvary joined the US Army. He was convinced by a local enlisting agent that it would be better if he got US citizenship. So off he went to become an American. In 1945, after landing on Omaha Beach at Normandy (the landing featured in Saving Private Ryan), MacGillvary made his way into France with the US Army. On New Year’s Day 1945, Sergeant MacGillivary’s company, pinned down in the European permafrost by a Panzer division, running out of ammunition and talking of surrender, lost its commander. MacGillvary was next in line to take his place. MacGillvary undertook a lone-man mission to try and free up his platoon's advance. He made his way forward and around the machine gun nests that were pinning down his men. Single-handed, he took out four German machine-gun emplacements. At the final nest, a solitary German soldier fired a machine gun burst at MacGillvary which ripped off his left arm. Still, MacGillvary took the position and allowed the advance to continue. Charles MacGillvary died Saturday, June 24, 2000 at the age of 83. He was buried at Arlington National Cemetery in a funeral reserved for only military heroes. 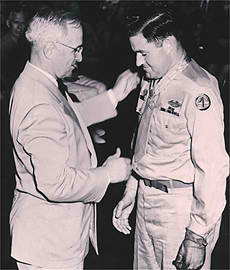 As time moves on we will find more stories of Canadians who are American heroes.

I hope that both Canadians and Americans reflect on the contribution made by these people who did not concern themselves with the differences between our two countries.
_________________
Adam