The origin of the West Nova Scotia Regiment Insignia

The origin of the West Nova Scotia Regiment Insignia

I hope I’ve placed this in the correct section but for the collectors out there, should you possess a West Nova Scotia Regiment cap badge, you may find this interesting:

Francis William ‘Skip’ McCarthy was born in 1909 & raised in Liverpool & Bridgewater Nova Scotia. Showing artistic talent as a youth he was able to go to New York to study art. Returning home he still required a job so be became a junior teller at a bank in Bridgewater.

In 1927, to supplement his income he enlisted in the 75th Lunenburg Regiment. In 1936 Skip’s unit was to merge with the 69th Annapolis Regiment to forge what was to become the West Nova Scotia Regiment. Skip was tasked to create its new insignia. The attached article defines Skip’s thought & design process for the project.

The difficult economic reality of the 1930’s frustrated many militia members in their failed attempts to join the regular army hoping to snag that steady paycheck. When word reached Skip that men were being recruited in Halifax for the British Army he & two other West Nova ‘originals’ Arnold ‘Slim’ Carver & Gerald Crouse headed for the city.

Successfully passing the interview & physical they were soon on their way to England. They enlisted in the 2nd Manchesters April 4, 1939. When war was declared Skip along with his Regiment left for France September 21, 1939.

When the West Nova Scotia Regiment arrived in England December 1939 there were plans for the three to eventually transfer back to their old unit however the German Offensive on May 10, 1940 changed all of that.

In January 1945 the Germans began the infamous six week death march of the already weakened POW’s towards Germany in order to flee the advancing Russians. Their eventual liberation by American forces came too late for Skip – his health had failed. It must be remembered, born in 1909 Skip was a good five to ten years older than many of his counterparts.

Repatriated home to Nova Scotia Skip was never able to resume a normal life. He passed away at the Nova Scotia Sanatorium in Kentville NS August 7th, 1947 from TB contracted while a POW. Skip was 38 years old. He is buried at the Trinity Anglican Cemetery, Liverpool NS.

After a brief hospital stay Clyde Cruickshanks finished the war as a motorcycle dispatch rider RASC in Scotland. Briefly returning home to Halifax in 1945 Clyde returned to Scotland & married the young woman he had met there. They settled in Stirling Scotland where Clyde worked as a miner until 1950 when the Korean War started. This time, serving with the Royal Ulster Rifles Clyde once again went off to war.

Lance Corporal Clyde Cruickshanks was KIA November 27, 1950. He was 32 years old. He is buried at the UN Memorial Cemetery Pusan, Korea. In addition to his wife, Clyde also left behind two young sons (two & three years old) & a nine day old daughter that he never got the chance to meet.

Slim Carver & Gerald Crouse were safely evacuated from the beaches of Dunkirk & returned to England. In 1941 they transferred to the West Nova Scotia Regiment.

Slim fought through Sicily & Italy before being wounded in Holland in 1945. At the time of his discharge later that year he held the rank of Acting Company Sergeant Major. Arnold ‘Slim’ Carver passed away December 26, 1988 in Bridgewater NS. He was 69.

Gerald’s war came to an end December 1943 at Ortona, Italy after suffering a serious head wound. Today at the age of 96 Gerald resides at Camp Hill Veterans Hospital here in Halifax. While he still lived at his home in Bridgewater, we conversed over the phone several times & it was great listening to his stories. He has that delightful South Shore accent which some of you may know. He provided much insight to what type of man Skip McCarthy was – An artist, soldier & a great friend.

I must mention I am also in communication with Skip’s nephew, Slim’s daughter & Clyde’s children.

The last attachment is an excellent article written some years ago by the late Harold Shea providing more background to Skip’s story.

One final postscript to Skip’s story: Sadly his 1947 death has allowed Skip to ‘fall through the cracks’ as he is not listed in the Commonwealth War Graves database nor is he remembered in Canada’s Books of Remembrance. We are hoping to soon remedy these oversights. 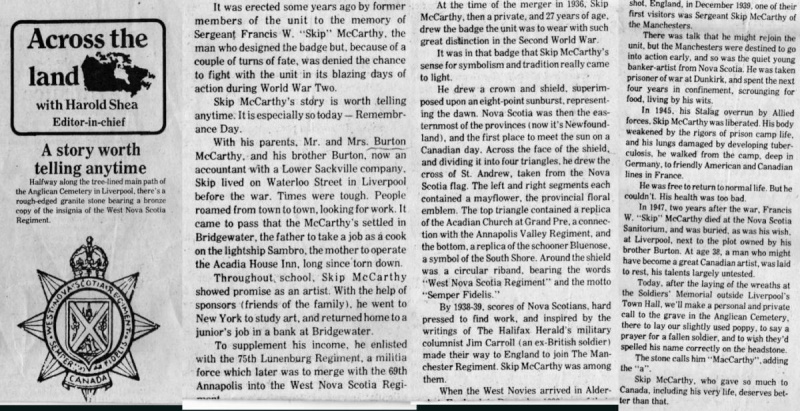 Re: The origin of the West Nova Scotia Regiment Insignia

Thanks for that. Interesting article. All my Dad's Family is from the area and I was even a West Novi myself (for 54 days) back in 1983s SYEP program.