A very interesting summary and explanation of what happened over twenty years ago.  You mentioned troops were deployed from the Reserve Force’s 34 and 35 Brigades and Regular Force troops from 5e Groupe Brigade du Canada (5GBC) from CFB Valcartier.  I wonder if many people know that the Second Battalion, The Royal Canadian Regiment (2RCR) from CFB Gagetown was part of 5GBC at that time and also deployed to Quebec?

I remember the Bn. had just started summer block leave and I was only three or four days into it when a phone call at around 2 or 3 A.M. woke me and my wife out of a sound sleep.  A Private on the other end said that the Bn. was being recalled and I was to report to the drill hall at 8:00 A.M. later that morning.  Still half asleep, I mumbled “OK” and hung up the phone.  My wife asked who it was and I told her that I had to report that morning.  By now fully awake, I considered that some young fellow was trying to pull my leg and have a laugh at the expense of the old Warrant Officer.  After five minutes of busy signals I managed to get through to the Bn. Orderly Sergeant’s office.  Luckily, it was the BOS himself, who answered, an older ex-Black Watch soldier who ran our Trade Pioneer section.  When asked, he in fact confirmed the recall order.

Later that morning, the CO briefed the Bn. on the situation up to that point; that we were being called out in “Aid of the Civil Power” on what would soon be known as OPERATION SALON, and we would probably deploy to Quebec.  The next couple of weeks were a flurry of activity from first light to last.  Check point training, kit checks, vehicle maintenance, live fire ranges run by staff from the Infantry School, briefings and the ubiquitous “sausage machine” where all our personal documentation was confirmed.  After all the maintenance, our APCs had to be driven through the training area and on out the south west side into civvy land to get to Fredericton Junction, the closest available rail siding for loading.  Once that was done, we deployed by bus to Camp Farnham, a Reserve base about 50 km. east of Montreal.

The Bn. settled in, established a tent city and once the APCs arrived, we drove out by company groups on a road trip around the area to shake them out.  A civvy vehicle got in behind my track during this run.  Now maybe it was the way the sunlight hit the car’s windshield, but I could swear the little old lady in the passenger seat was flippin’ me the bird.  Luckily, I did NOT return the salute, because when I looked again I saw she was actually giving us the “V for Victory” sign (or maybe the “Peace” sign?)

After about a week or so in Farnham, the Bn. broke camp and deployed by road to the community of Delson on the south side of the St. Lawrence, about 5 km. from the reserve of Kahnewake.  My company set up its bivouac in an empty garage compound next to a railway line and awaited further action.  It came when we rolled with the rest of the Bn. right up to the eastern boundary of the reserve.  It looked like we might storm on in but nothing came of it, so after about an hour we returned to our compound.  You should have seen the crowd that gather to watch us as we parked and unloaded inside our barb wire fence.  Almost like chow time at the zoo.

Our final deployment forward happened soon after that when our company moved into an open field close to the reserve’s border.  Barb wire and tents up, several dozen dump truck loads of gravel down to make the field suitable for the APCs and Camp Holdfast took shape.  At that time the Assault Troop of the Combat Engineer Regiment from Gagetown was attached to us, making us a company of four platoons.  Then it was lead the Bn. up the St. Isidore Road for the raid on the “Long House”.  We relieved the Van Doos on the south and east side of the reserve and established three traffic check points.  Two at the junction of the St. Isidore Road and the highway going to the Mercier Bridge, with the third at the other end of the St. Isidore Road where it entered Kahnewake from the south east.


We settled into a platoon rotation of checkpoints, vehicle patrols and stand by in camp.  The biggest excitement was when my platoon had come off checkpoint duty to do stand by platoon and we got the call for a “fast ball” op.  It was the heliborne insertion onto Tekakwitha Island to do a sweep and search.  We bombed up, loaded on our tracks and roared off to an open field nearby.  There, we were joined by the standby platoons from the Bn.’s other rifle companies.  After checking a large air photo to familiarize ourelves with ground, we received a quick set of orders before being manifested into “chalks” or helicopter loads.  The choppers came in to the LZ; we boarded and flew to the island.  One platoon secured the bridge from the mainland while my platoon and the third spread out and formed a sweep line moving from east to west.  At one point it looked like the crowd that gathered at the bridge was going to overwhelm the platoon holding it, but the situation was controlled eventually.  By the end of our sweep all we found were some weapons, web gear and a load of illegal cigarettes at the marina at the west end of the island.  We loaded all on the choppers and were off the island by last light.  The weapons that I saw, while not illegal to own in Canada at that time, were hidden with the web gear in suspicious spots; wrapped in plastic and buried or concealed under brush, leading me to think the intent of the owners was not pure of heart.

Once the Mohawks of Kahnewake and the Quebec government came to an agreement and reopened the bridge, we were no longer needed there.  So it was clean up, pack up and return to Gagetown, leaving the Van Doos to cover the reserve at Oka.

Other historians, better than me, can decide how this point in Canadian history turned out, and its effects.  For myself (and myself ONLY) I feel it caused a lot of heartache and grief all around and was a gigantic waste of time, effort, money and material all because some folks wanted an extra nine holes on their golf course!

Re: Oka and Kahnewake Revisited

Thanks Ian. It is important to record your observations of the events that shape Canada today. Thanks for the insight.
Ian B

Managed to copy some checkpoint pics from Kahnewake: 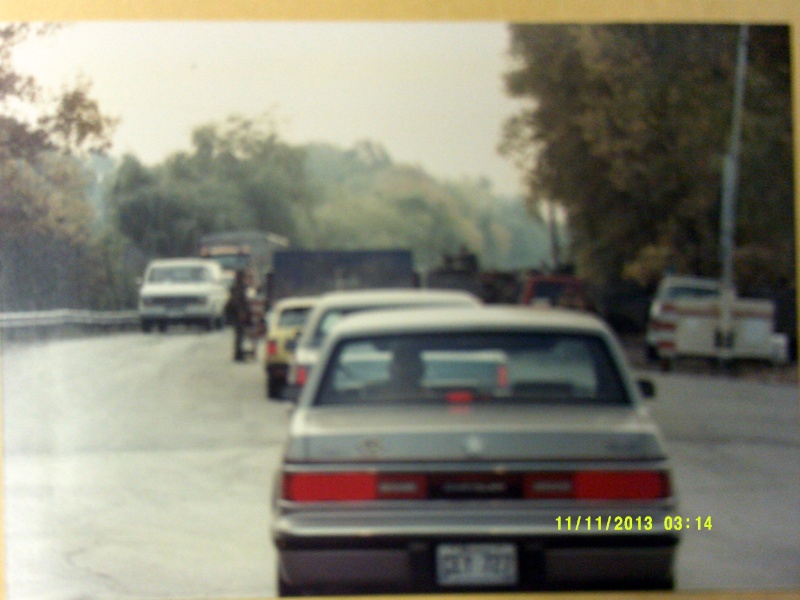 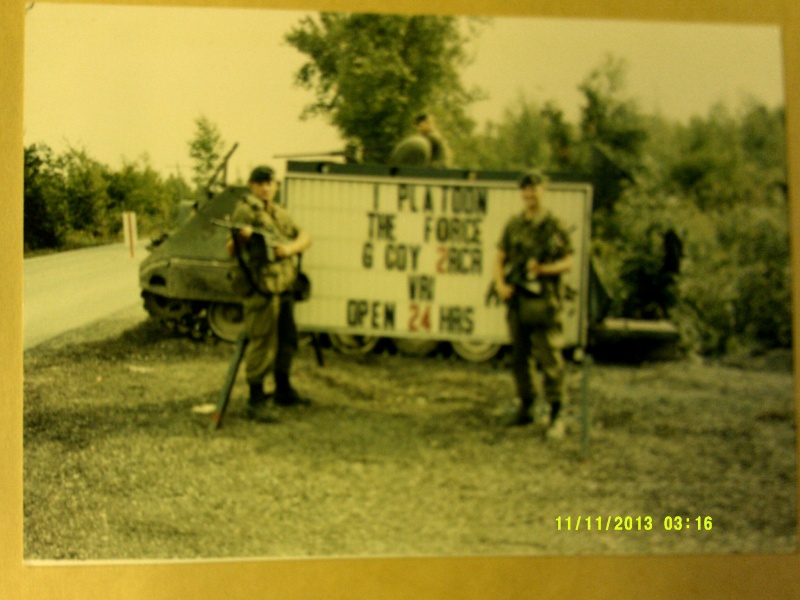 Southern checkpoint with the platoon sign our fellows made up. 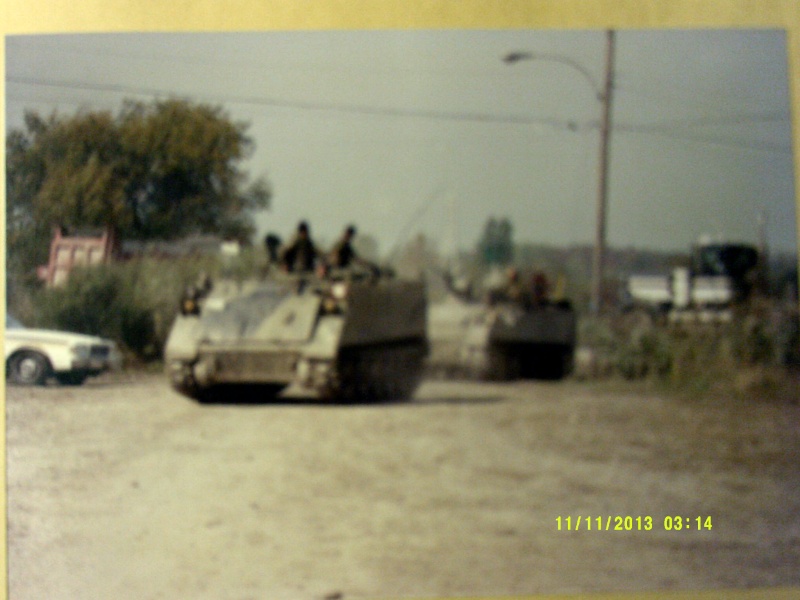 A platoon M-113 and a Recce Pl. Lynx coming to the Camp Holdfast camp.
Sponsored content

Re: Oka and Kahnewake Revisited