I want to know what you think about this helmet on a famous canadian militaria dealer :

The rivets on the chin strap also date the helmet, but I cant remember what the rule is, high rivets vs low rivets.

The liner of a MK2 also fits this helmet, so that doesn't make the helmet the same date.

The rivets on the chin strap also date the helmet, but I cant remember what the rule is, high rivets vs low rivets.

The liner of a MK2 also fits this helmet, so that doesn't make the helmet the same date.

MkIII helmets have the bolted in liner, MkIVs have 'Lift the Dot'. It is possible to find 1945 dated MkIV helmets although for the most part the MkIVs are associated with the post-WWII era. Service Publications book 'Tin Lids' has everything in it that the aspiring Canadian helmet collector will need to know.
ypres

Mk IV helmets did see limited service during the war. According to Brian L. Davis , they were intended to be used in the Far East and were designed to also be used as a basin or bucket and needed the quick release to remove the liner when doing so. During 1945, the helmet was issued when replacing a Mk III that was damaged. Davis refers to this as, "on a maintenance basis".

The introduction of the helmet Mark III is gradually made according to the system of the unitarian replacement, the priority being given to the troops of the theaters of operations, following the example of the 21th group of armies which was completely equiped of helmets Mark III the day before the landing in Normandy.
Given that the headgear of the new helmet stays the model Mark II, certain units, mainly Canadian, were only endowed with shells Mark III in whom the soldiers had to place headgear of their helmet Mark II.
The helmet Mark III was mainly used on the European theater of operations from 1944 till 1945.
There is some différances. In particular the color matt green for Canada and chestnut ( marron ) for England 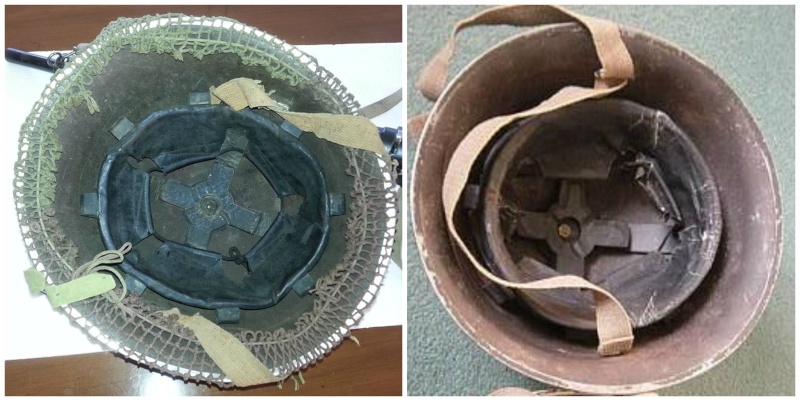 The helmet looks fine to me, except de very steep price..

@Gate , the color has nothing to do with the country the helmets were used by.
Early made ones are green, later ones a brown.

@ LSR,
I do not believe.
the Helmets Mark III are painted by color matt green during the end of year 1943, then of khaki color brown from 1944; this color becomes more and more darkened until 1945.
edstorey

So, where to these nuggets of information relating helmet colour to the year the helmet was made come from? Is there a published source?

Based on my own experience, the green Mk3 helmets do have earlier dates as the brown helmets (the ones I have encountered over the years, that is).

I do not have sources, other than you can find on the web that confirm that. (and I know that a lot that's on the internet has to be taken with a grain of salt).

But one thing I'm sure of, Canadians did not exclusively got green/khaki Mk3 helmets.
thegate

We find this description on site that collectors and which studies and make the researches only on helmets.
Sorry this site is in French

You can also find this description on Wiki.
And other sites.
http://www.iwm.org.uk/collections/item/object/30100921