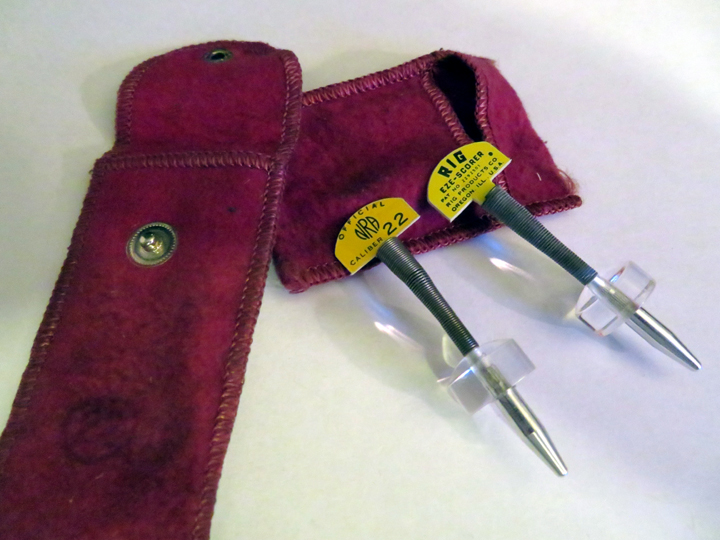 Have never seen anything like this. Anyone know how they are used?  Thx Brian
Ian B

Yes I have seen something similar from my time on a shooting team in the Regs.

Short story is that in competitive shooting, targets have several concentric circles spreading from the centre of the target. The rings are scored with lesser values as you go out from the centre, that is the most inner ring is the highest score and the very outer ring is scored the lowest.

If a round that hits the target "cuts", that is the hole touches a circle, then that round is said to score the area that that circle encloses. So even if the hole appears to be in say a circle that scores "4", in cutting the line it actually scores the next higher, "5". With paper targets, when the bullet passes through, it does not tear out the paper in a neat circle (except if one uses a special type of bullet called a "wad cutter", which does make a neat, sharp hole, like a paper punch). Regular bullets leave a more ragged torn hole, which may make accurate scoring difficult.

The items that you have shown are used for target shooting with .22 cal rounds. If there is any doubt in scoring a hit using the naked eye, then the pointed metal rod (in the diameter of .22 cal) is pushed into the hole. This pushes the paper of the target into a neat circle. The clear plastic collar stops the point at the surface of the target, and allows the checker to see through it to confirm if the round has indeed cut the next higher ring for scoring. It appears that the spring portion enables a judge or firer to bend it over and look directly perpendicular to the target to confirm scoring. You can see on the yellow handle that the scorer has been made for the National Rifle Association, the NRA, in the States.