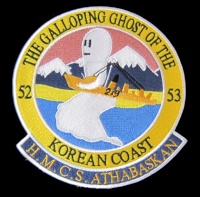 A day or so ago I posted seeking a picture of the badge used by the RCHA. I immediately received a response which was much appreciated however it was a QC badge and I am seeking the KC version.

I attempted to post a reply to the post but the forum software would not allow me to do so. The error message was that only administrators could post to the thread. I was however able to edit my original post which I did but after second thought I realized that no one would probably see the edited post...so here I am.

Could someone in the know tell me what went wrong so that I don't encounter this problem again.

PS I still require a picture of the KC version of the RCHA badge. :) thanks.
mk1rceme

Ed, I need a bit of clarification about the badge. Are you talking about the metal cap badge for the RCHA? If so, they wore the standard RCA cap badge. If you are asking about the shoulder tapes, they wore one with RCHA either printed or embroidered.
[You must be registered and logged in to see this image.]
RCN Sailor

hi sorry my request was not too clear this time. I am after the unit blazer type badge but with KC and GVIR cypher.