You are not connected. Please login or register
+2
GCR817
Battalion Colours
6 posters

Here's the website for the Canloan Army Officers Association. Among other things it gives the British Regiments and the Canadian officers assigned to them. This is a subject you don't hear much about.

[You must be registered and logged in to see this link.]

[You must be registered and logged in to see this image.]
Battalion Colours

I just came across this CANLOAN group on ebay. There's a Winter photograph taken in BC 1944 which shows an interesting mix of headgear and some with helmet covers.

[You must be registered and logged in to see this link.]
GCR817

CANLOAN has always interested me as I have been lucky to know a couple of guys who served as part of the program. There is a good book on the topic if you can find a copy: Code Word CANLOAN, by Wilfred Smith, 1992.

The old Canadian War Museum had an excellent display of CANLOAN tunics on display, but they have not put them out in the new facility. As all collectors know, space is always an issue! Anyhow, here are some pics of the old display for your enjoyment.

[You must be registered and logged in to see this image.]
Bill

Nice uniforms. A lot of history in those tunics. I wonder if the CWM has the provenance and a bio for each of those tunics?
Haplo

Great tunics to see.
To bad that they aren't on display any more.
Michael Reintjes 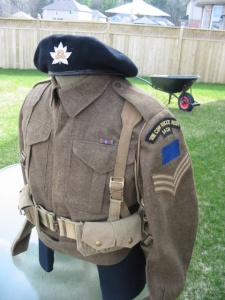 I used to own the KSLI 11TH ARMD BD you have there....still have the gents service dress.....they came into a coin shop I was working at in the early 80's,nice to see its still around....M.
Battalion Colours

Here's another interesting book on the CANLOAN:

[You must be registered and logged in to see this image.]
Battalion Colours

Has anyone read the following books on the CANLOAN? If yes, are they worth reading?

--SOME LETTERS AND OTHER WRITINGS by Donald Albert Duncan.

--WAVE AN ARM, FOLLOW ME! THE WARTIME EXPERIENCES OF A CANLOAN PLATOON COMMANDER by C. Roger MacLellan.

--THE CHERRY BERET: DISTANT RECOLLECTIONS OF WORLD WAR II AS REMEMBERED BY ONE OF THE FIRST CANLOAN OFFICERS by Ashton L. Kerr.

I have Fendick's "A Canloan Officer" and it is an excellent book. I found a signed copy on Abebooks about a year ago.

I also have Kerr's "The Cherry Beret..." (another signed copy, also found on Abebooks) but he was not part of the Canloan operation (despite the title of his book), though he was loaned to the British army, with other medical officers. His name is not on the official Canloan list and Fendick in his book is quite adamant that only officers of the Canloan operation are true Canloan officers. Kerr's book is interesting.

It appears the British army needed medical officers and the Canadian army sent some in 1941 (almost 3 years before the Canloan operation). There are 43 names at the end of his book. The list comes from "Q" List Officers, Rec/34/Q LIST/1 dated 22 December, 41, Directorate of History, National Defence Headquarters. So in effect, it seems there was at least two times when Canadian officers were loaned to the British army.