Not sure really where to post this one but thought this section was the most appropriate. As many here know, I collect primarily to the Irish Regiment of Canada. One of the most sought after items are Memorial Crosses to those who fell during the Second World War.


As time permits, I will add photos of the Memorial Cross and also a photo of Webster himself.

I was lucky enough last week to acquire the Memorial Cross named to John Barrowman Webster. Of interesting note, Webster is what is referred to as an "Original Irish" in that he joined the Unit straight away at the time it was mobilized as a CASF unit and no longer NPAM. Below is his story....

Other service facts: Served in Queen’s York Rangers April 1937 until enlistment in
CASF.

Details of Webster’s death:
No.B-78569, Pte. R. Hardy, No. 14 Platoon, “C” Coy. Irish Regiment of Canada (CA),
having been duly sworn states:
At Fort Peninsula, around 1240 hrs, May 23rd. 1942, as No. B-78623, A/Cpl. Webster
and I were getting out of our quarters to play baseball, we noticed an army truck standing
at the side of the hut. On the spur of the moment we decided to take a ride with the basic
idea of getting driving practice. I was driving on the way out, and Cpl. Webster was to
drive on the way back. We did not get permission from anyone to take the truck on May
23rd. 1942. I have had some experience driving army vehicles around various camps.
With qualified drivers with me and permission to get this driving practice. I do not have a
M.T. drivers standing Orders nor having been given a test. The road conditions on the
highway were not very good so we were not driving fast. I would estimate our speed at
30 or 35 mph but I did not see it on the speedometer as it was out of order. At
approximately 1 ½ mile from the Fort as I was keeping to the right to keep off some loose
gravel pilled in the middle of the road by the grader, I hit very soft ground and entered a
shallow ditch. I had still control of the truck and was trying to ease it out when it seem
that we hit a boulder. I was thrown around in the cab and it was then that I lost control.
The truck bounced and was headed right to the guard-rail of a small bridge. I wrenched
the wheel to the right with idea of going into the flat field at our right. The ground being
soft, I could not do it completely and we hit the end of the guard rail with the left side of
the truck where Cpl. J.B. Webster was sitting. The shock was very slight, the truck being
heavy and the guard rail being very flimsy. I did not know that Cpl. Webster had been hit
at all. We bounced and rocked down and across the creek. As the truck jolted across the
creek, Cpl. Webster was thrown past me out the right hand door. Then the truck came to a
halt against the far bank. I got out of the truck and I saw Cpl. Webster lying on his back
at the edge of the creek. He seemed in bad shape. I ran up to the nearest house to get help
and phone the Fort, but there was phone there. So I came back, and seeing no car coming
down the highway, I backed up the truck with the intention of getting help myself. I had
to use the four-wheel drive to get out of the creek. Then a civilian delivery truck came
along and I stopped him and asked him to go to the Fort for some help. I ran back and
tried to bathe Cpl. Webster’s face with water from t he creek. While doing this the
delivery truck came back with Pte. Roddy. He told me that help was coming and took me
to the other side of the bank. When help came from the Fort, I was taken back to the Fort.
They dressed my superficial injuries and later on I was driven down to the hospital.
When I left camp I was wearing P.T. dress: - Gym shorts, socks and soft shoes. Cpl.
Webster was wearing a sweatshirt and I think his battle dress trousers. Neither of us had a
pass to leave the Fort
_________________
Cliff

Although not the best photos of the cross, these are the only ones available to me at the moment as I do not return home on HLTA until the end of October. My lovely wife refuses to open the package, as she will not take responsibility for the cross being lost.

Front of the cross, note it appears quite poorly kept and the points of the cross are somewhat damaged. 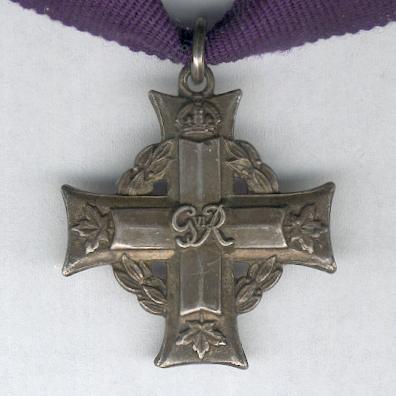 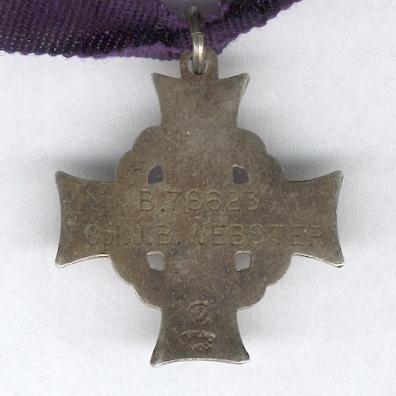 This image shows the silver hallmark on the lower arm of the reverse. 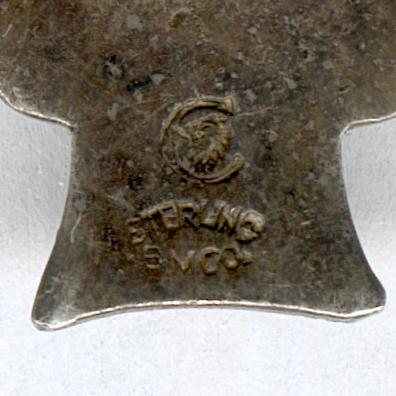 Here is a photo of Cpl. John Barrowman Webster. I find his atire most interesting. 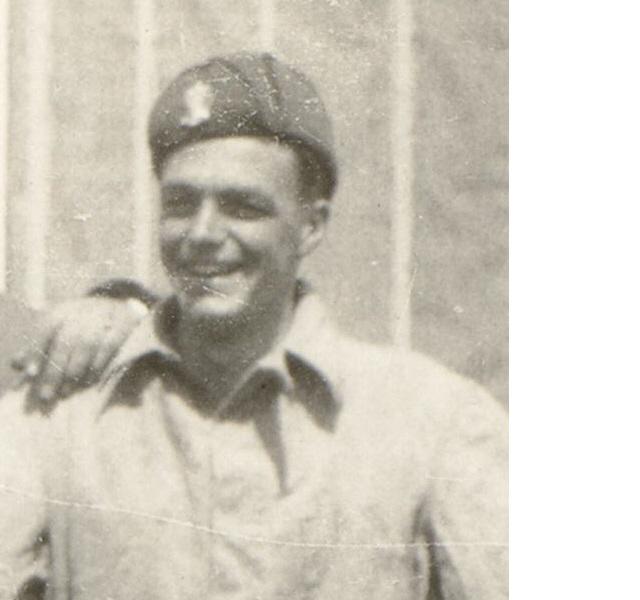 Good looking memorial cross. The condition represents 68 years of age and only add to the cross, in my opinion. Too bad being killed in a driving accident though, when what you wanted to do is fight the Germans.
pylon1357

I know what you mean in regards to being killed in a vehicle accident. The driver of the vehicle, Ross Hardy was KIA September 13 1944 while advancing up the road on approach to Coriano.

Well I was a little concerned when i got home to open this cross. I bought it online from a dealer with only the above photos. The obverse of this cross lacks a lot of the crispness I am accustom to seeing. However, after cleaning it, weighing it and posting my concerns on the British medals forum, it seems my worries were unfounded.

Here it is cleaned, yeah I know many frown on cleaning and polishing a medal, but IMO this is a memorial to a fallen soldier, to let it darken is to let the memory of this soldier to darken. Maybe I have a goofy way of thinking but its my thought. 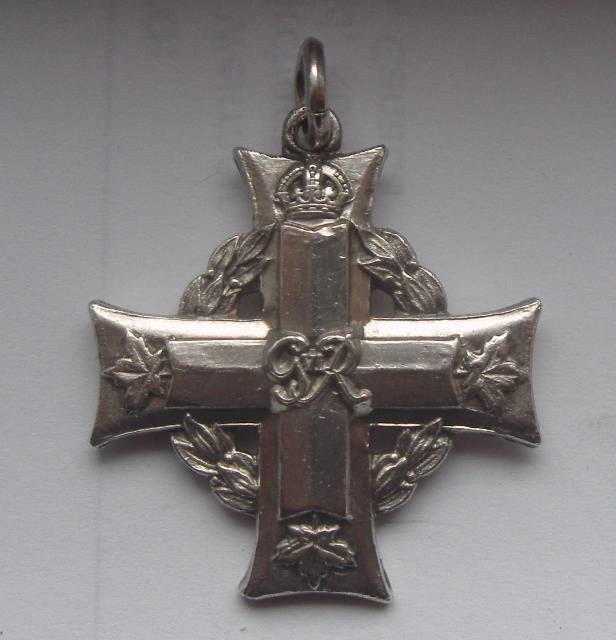 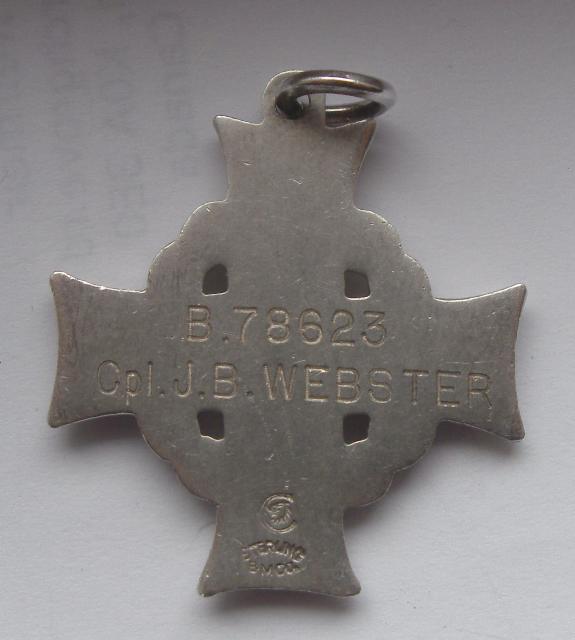 After attending the Markham military show, I decided to visit John Barrowman Webster's Grave. The cemetery is located at the coroner of Woodbine Ave and Kingston Rd in Toronto. I must say I was quite pleased with what I saw.

I first went to his grave about 5 years ago. I was not impressed at the condition of the headstone. In fact, I was not happy with the fact I trouble finding it. It was buried almost out of sight in the ground. I did complain about this and I guess someone heard me. The entire section is being redone in a three year plan. All the stones are being replaced and put upright as opposed to flat on the ground.

Here a few photos I took of Webster's new head stone. Included in 2 of the photos are the medals pair that are representative of his issued entitlement.

Of very interesting note: Cpl Webster is the first member of the Irish Regiment of Canada to become a casualty, not by his own hand. 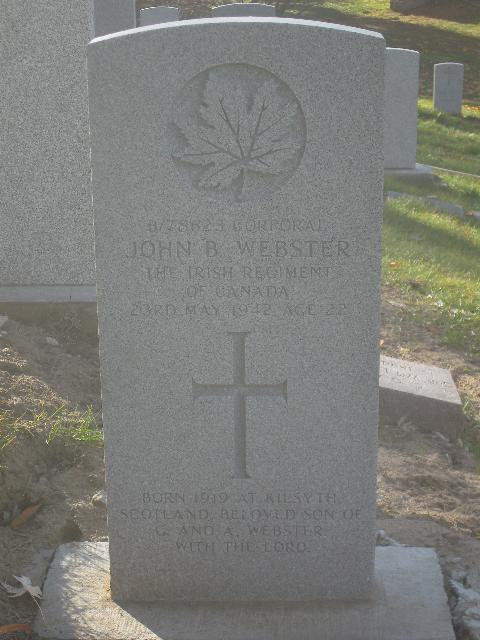 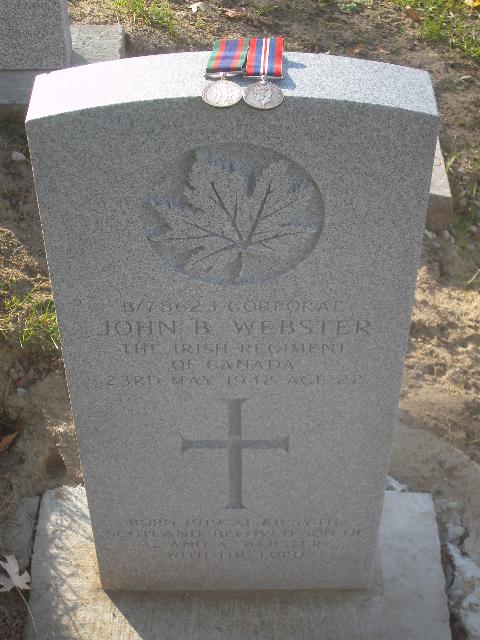 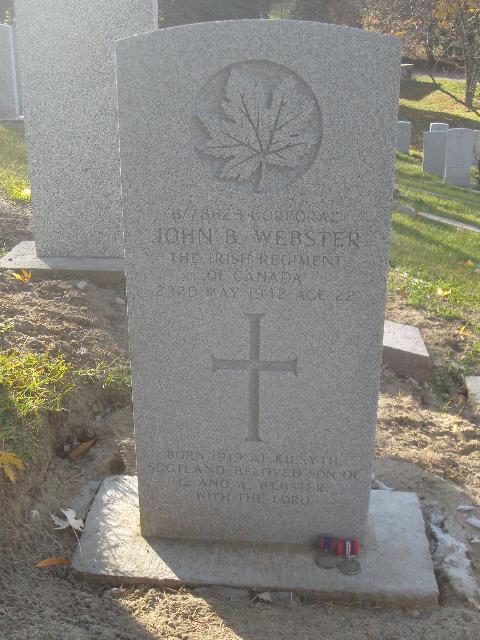 I searched and searched for a photo of Cpl Webster's headstone, as I found it a few years ago. Finally I found the image. If you look at the stone, it is laying flat on the ground, also note you can see the area where I had to clean it off. If you look closely, you can see the crack in the stone. It runs from about the right leaf spire down through below the left leaf spire. This crack to me appeared to be trough the stone and not just a surface issue.I sent this photo and a photo of Webster (as it appears above) to the Memorial site that the VAC has.

Currently, I putting together a display of John Barrowman Webster. I have not yet found a layout that I happy with. Once completed, I will post it here in this topic. 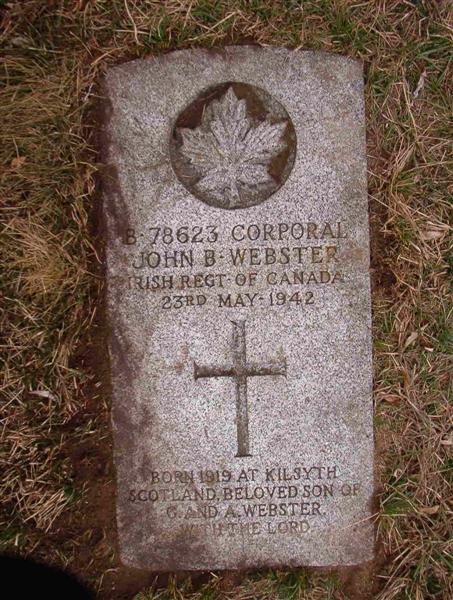 I just finished this little display to Cpl John Barrowman Webster. It measures 11X14 inches. I tried to get the best photo possible and this is it. ANy and all comments welcome, especially on how to better photograph items under glass. No matter what I tried, I still got a reflection from the glass.

Note, the odd light colour on the left of the frame is actually a reflection and is NOT part of the display. 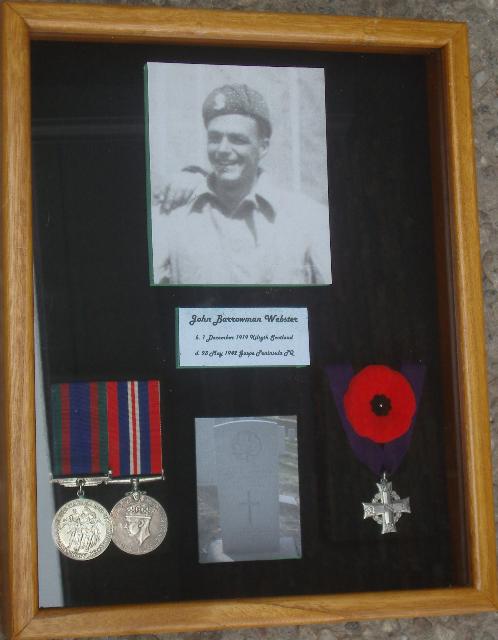