This 2nd Infantry Division BD was just listed on ebay: 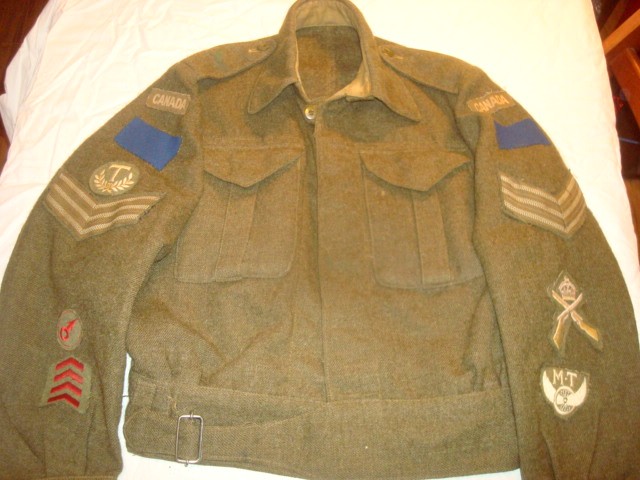 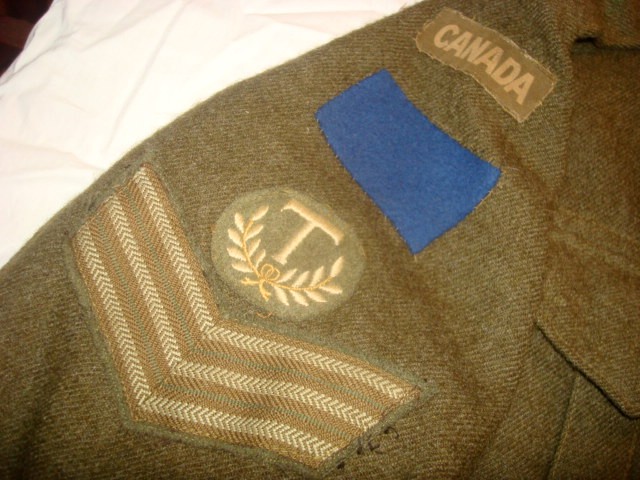 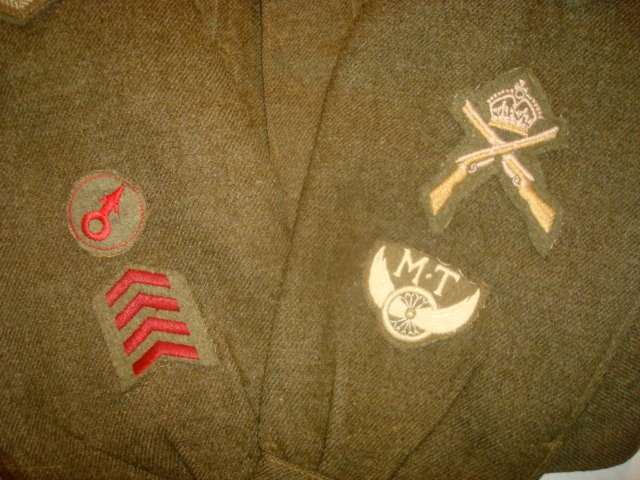 "RARE Identified D-Day Canadian 2nd Infantry Division Battle Dress Uniform / Jacket. See photos below. All insignia is original to this jacket, the original owner was an experienced serviceman. Below is an excerpt from his obituary from 1992. The jacket has Canadian 2nd Division insignia on each sleeve, cloth "Canada" titles, Tradesman group B (Rifle Company) badge, Sergeant rank, trained soldier badge, Marksman badge, motor transport badge, and 4 red service chevrons. The date on the jacket is faint, but it looks like "1943". All buttons present. Jacket has signs of wear, but no significant damage. Below is the text of the obituary. This jacket beloned to John E. Prentice, and was purchased from his family.

" "Durham Region News. October 28, 1992. John E. Prentice Jr. (1908-1992) Long in the memories of family and friends will live the legacy of John Etherald Prentice of Oshawa. Mr. Prentice was a lifelong resident of Oshawa, born to school instructors John Prentice Sr. and Emily Prentice. At age 18, John E. Prentice Jr. volunteered for national service, serving with distinction in World War Two in the Royal Regiment, receiving wounds and a decoration for bravery at Dunkirk. In 1932, John E. Prentice married Madeline Clark of Oshawa, their union bearing three children: Michael, Karl, and Joanne. Upon leaving the service in 1948, John E. Prentice owned and operated a plumbing repair business in Oshawa until his retirement in 1976. He is survived today by his three children and their descendants, his late wife Madeline Prentice passed away in 1988. Services will be held this Saturday, October 31st, at 10:00AM at St. George's Memorial Church. In lieu of flowers, the Prentice family asks that donations be made to the St. George's Youth Fund."

discussing this one on another forum. I wouldn't touch this one with a ten foot pole...the badging makes little sense and the story even less...beware.
mk1rceme

It is sad that unknown buyers will waste their money on this. 9 bids and it is at $163. The only reason to bid on this item is for the sum total of the parts.
Rob

I thought this one was so bad it was funny.

Yes a strange mixture of Domestic insignia and overseas insignia not to mention a lack of Royals shoulder flashes. Why are there "Canada" flashes? whats with the Mars badge and marksman insignia?...why is there no white stripe for a prewar 2nd Div soldier who was supposedly at Dunkirk even though the 2nd Div was no where near Dunkirk? The explanation about the 2nd Div siege of Dunkirk in '44 is dodgy as well given the Divisions other significant engagements.Why would a guy who has been through the serious fighting of Normandy and Falaise remember the Siege of Dunkirk? looks completely made up by someone who had little understanding of WW2 BD overseas badging....a real weird offering that reminds me of the uniforms I used to draw as a kid with almost every available insignia I could think of on it....again, BEWARE!!
recceboy

What is sad is that there is a lot of this going on the hobby of collecting, and there are lots of folks out there that will buy this and feel good until, they get the news that "it's not the real deal".

But this begs the question, why don't these bidders / collectors do their research? Sites and forums like this and several others have lots of information and members willing to discuss and share knowledge on items. There are lots of reference books and clubs etc that will educate collectors, but it seems that blissful ignorance is preferable to some time and effort put into research and reading.
Haplo

They are late war types.
The post war stripes didn't have the thin green line between the rankinsignia.

I do not believe that the Second Division landed in France until July 1944, so this cannot be a D-Day uniform.

What is that patch with the circle and the arrow ?
Bill

It is the MARS badge, which was NOT TO BE WORN overseas.
Martin Howett

Would a serviceman who after 4 1/2 years of service and who upon his return to Canada from NW Europe reported for duty with the 1st Canadian Field Artillery Battalion of the Canadian Army Pacific Force at Camp Shilo Manitoba be eligible to wear the Mars Patch once he was taken he had became a member of his new unit?
Bill

The MARS badge was not favourably looked upon by the Active Force. In fact it was regarded negatively by the overseas fellows. Those soldiers coming back for the CAPF would not "step down" and put up a badge that had such connotations.
Martin Howett

Bill wrote:The MARS badge was not favourably looked upon by the Active Force. In fact it was regarded negatively by the overseas fellows. Those soldiers coming back for the CAPF would not "step down" and put up a badge that had such connotations.

Not to mention that the Mars badge was not to be worn by NCO's since it went without saying that if you were an NCO that you were also a trained soldier....
Martin Howett

I have noticed a lot of uniforms with multiple Trade Badges. How many of these badges was a soldier allowed to wear? My father was trained as Infantryman in Canada. Then trained and worked as a Dispatch Rider in England. He was seriously injured in an argument between his motorcycle and a double-decker bus and was going to be sent home as no longer being fit for the Infantry or for Dispatch Riding. For some reason a Brigadier General intervened and had him trained as a radioman and telegraph operator and got him attached to an Artillery Regiment in the 3rd Infantry Division, where he served throughout the NW European Campaign. How many of these trades would he have been allowed to display on his uniform?
Sponsored content