American and Canadian RAF personnel are to visit Lincolnshire to mark the 70th anniversary of the death of a World War II pilot, famed for his poems.

John Gillespie Magee served with the Royal Canadian Air Force (RCAF) 412 Squadron at RAF Digby, near Sleaford, and is known for his poem High Flight.

Magee is said to have been inspired to write the verse after flying a high-altitude test flight in his Spitfire.

He died on 11 December, 1941 in a collision with another aircraft.

John Gillespie Magee was a US citizen who crossed the border to Canada when he was 18 to join the RCAF.

Within a year, he was sent to England and posted to the newly formed 412 Fighter Squadron, which started operations at Digby on 30 June 1941.

His role was to fly fighter sweeps over France and provide air defences over England against the German Luftwaffe.

He later died, aged 19, in a mid-air collision with an Oxford Trainer from Cranwell, flown by Ernest Aubrey.

He was buried at Scopwick Cemetery, near Digby, on 13 December, 1941, where his coffin was carried by pilots from his own squadron. 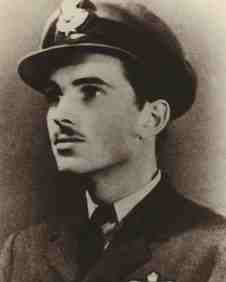 Magee wrote High Flight after taking his Spitfire on a test flight.

Oh! I have slipped the surly bonds of earth
And danced the skies on laughter-silvered wings;
Sunward I've climbed, and joined the tumbling mirth
Of sun-split clouds - and done a hundred things
You have not dreamed of - wheeled and soared and swung
High in the sunlit silence. Hov'ring there
I've chased the shouting wind along, and flung
My eager craft through footless halls of air.
Up, up the long delirious, burning blue,
I've topped the windswept heights with easy grace
Where never lark, or even eagle flew -
And, while with silent lifting mind I've trod
The high untresspassed sanctity of space,
Put out my hand and touched the face of God.
_________________
Adam