Just a few pictures of my latest find, all these items belong to the same man.....

John Ramsey Biscoe was the son of Colonel V.R. Biscoe who was Commanding Her Majesty's Troops in Halifax (British Army) at the time the SAC was recruited and he saw two sons sail off with the SAC.

John Ramsey Biscoe was born December 19, 1882 at St Andrews, Scotland. His religion was C of E and he said he was single at the time of enlistment in the SAC. His enlistment date was March 6, 1901 at Toronto, Ontario. He was reattested in South Africa on April 25, 1901. He was released by Purchase on August 21, 1903 and credited with 2 years 169 days of service and an assessment of Exemplary.

He had served in the Johannesburg Mounted Police (as stated on his attestation papers for WW1) for three years after the SAC. I also had noted that he held Transvaal Police Warrant Number 569.

1. Victorian - QUEEN'S OWN RIFLES OF CANADA

9. Silver - Royal Visit of Duke and Duchess of Cornwall 1901

10. War Department marked Glasses (no they are not Binoculars, just learned the difference)

I am looking to see if these medals exist and hope they are in someone's collection......

P.S. During World War One there were three other brothers served, would love to put all family together again:

Vincent Henry Robert Biscoe had a very colourful career. He was in the North West Mounted Police (3397) from June 1, 1899 to November 30, 1900, including service with 2 Canadian Mounted Rifles (55) and was released in South Africa. He appears to have gone to the Transvaal Constabulary on June 21, 1900 until October 28, 1900. He then somehow returned to Canada and joined the SAC on an unknown date in Canada (probably March 1901) and was then reattested in South Africa on April 25, 1901. He was released in South Africa as Unsuitable on November 12, 1901. He was in trouble in the SAC and was rescued by Capt Hilliam who had him transferred to the Canadian Scouts. His Canadian Scouts enlistment date was November 1, 1901 and he served until February 12, 1902 when he was appointed a lieutenant in the Pieters Light Horse. He resigned on July 6, 1902. He later served with the Mounted Infantry in Somaliland. In World War I he enlisted in the Canadian Expeditionary Force (20281) on September 22, 1914 and served until October 15, 1915, reaching the rank of sergeant. He left the CEF for a commission in the Loyal North Lancashire Regiment. He reappeared in the CEF as a private (20936) from May 15, 1916 until March 15, 1919. 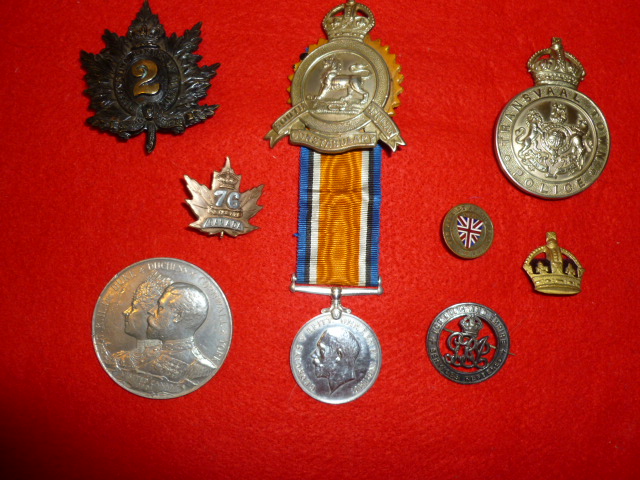 Nice group. I have a pair of binoculars I once found on gramps' attic that are very similar. Never knew what they might be. I'll see if I can post a picture when I get back.
qsamike

I used to call them all binoculars but I have learned that if the eye pieces are fixed they are just called glasses but if you can adjust the focus on each eyepiece then they are binoculars......