Unique amongst a dwindling fleet of heroes!

The last surviving example with her original engines and fully restored to her period layout using the finest English Elm, Oak and Pitch Pine.

A once in a life time opportunity to acquire the last remaining Dunkirk Little Ship with her original engines. With less than 80 floating examples of the 650 'Little Ships' left, ANNE who is fully restored and ready to set sail, offers you the chance to own the quintessential and ultimate example of a Dunkirk Little Ship.

In May 1940, she was towed (to save fuel) from the Thames to work under enemy fire in the shallow waters off the Dunkirk beaches in Operation Dynamo, during the rescue of 385,000 trapped soldiers, described by Winston Churchill as a ‘miracle’.

Construction and those very special engines!

Built by Frank Curtis in Looe Cornwall and launched in 1925 she still retains her original motors, the last remaining pair of operating Ailsa Craig LB4 gravity fed engines in the world first fitted in 1931. These stunning engines, built to last under Ailsa Craig’s motto ‘there are no garages at sea’ are examples of some of the finest British engineering and proudly display their Royal Warrant to King George V.

Both engines were fully restored for the 2010 Channel Crossing to Commemorate the 70th Anniversary of Dunkirk by Rolls Royce of Chichester. They were again serviced by Rolls Royce for her participation in the Diamond Jubilee Pageant in May this year.

ANNE can be used to explore both the coast and inland water ways as she has a shallow draft and is welcomed with open arms wherever she goes.

Invited to be vessel number four of over a thousand for the Queens Diamond Jubilee you can see her proudly flying the flag on You Tube at https://www.youtube.com/watch?v=tNdjhommX0A (1m10s - 1m20s and leading the horns at 2m06s)

This unique and historic vessel can also be used for a wide range of activities ranging from film and advertising work, a wonderful setting for informal meetings or romantic weekend breaks.

She has a fully documented history dating back to former owners Brigadier General Sir Frederick Meyrick, Bart. and Commander A F G Tracey R.N. and is included on the National Maritime Museum's list of small vessels of special importance. 'Anne' is featured in the July 1925 issue of The Motor Boat magazine following her completion for Mr N R Mellor of Helford, Cornwall. An extensive history file dating back to the twenties is included in the sale along with a log book begun in 2010 containing entries from Sir Allan Willett, Lord Lieutenant of Kent, who came on board with two remarkable visitors.

Lord de L’Isle, signed as the grandson of Lord Gort, who commanded the British Expeditionary Force, largely rescued thanks to naval planning by Admiral Bertram Ramsay. Admiral Ramsay’s son, Maj-Gen Charles Ramsay, appended a “WELL DONE” comment for the team that had worked on the little boat through a hard winter in the Berwickshire workshops near his father’s home, Bughtrig House.

ANNE was fully rebuilt with a new grown oak stem post, pitch pine planks and English oak ribs. She has also undergone a complete refurbishment of her interior, returning to her simple yet elegant and comfortable 1925 layout using the finest English Elm completed with original Edwardian brass ware. These extensive works, with originality and craftsmanship being the foremost priority will ensure that she can provide enjoyment and remind future generations of her historical importance for at least another eighty five years.

The accommodation offers a spacious saloon with port and starboard upholstered settee berths with additional pipecots if required. Drop-leaf cabin table and athwartships double berth panels. Skylight and bulkhead door to heads compartment with a discharge flush wc and wash basin. There is a small galley with two burner gas cooker having oven and grill. Stainless steel sink unit, coolbox and lockers. Wheelhouse with port wheel steering and instrumentation. Weather proof side and rear canopy over cockpit area with seating and table, providing additional berths if required.

To ensure that she is safer than ever for her return to the sea she now includes a new navigation package, including GPS Plotter & Radar with AIS, VHF communications as well as high end safety equipment including self inflating life jackets and sea survival life raft. All of this new equipment has been carefully selected to provide the maximum usability and safety without detracting from her period elegance.

Support for the RBL and H4H.

Anne is sold with both the past and the future in mind and 20% of all proceeds will be offered to the following charities; 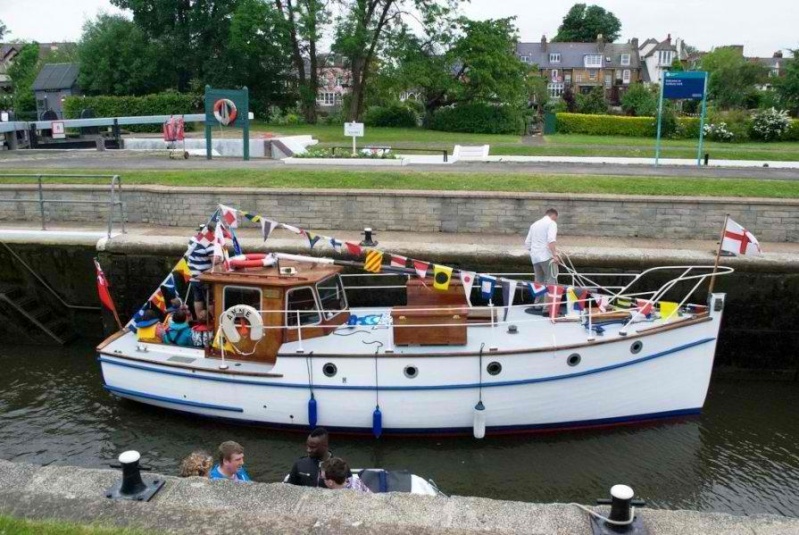