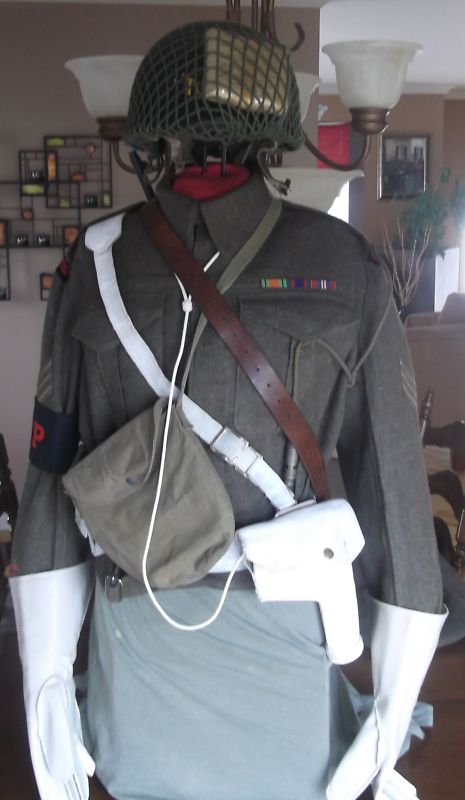 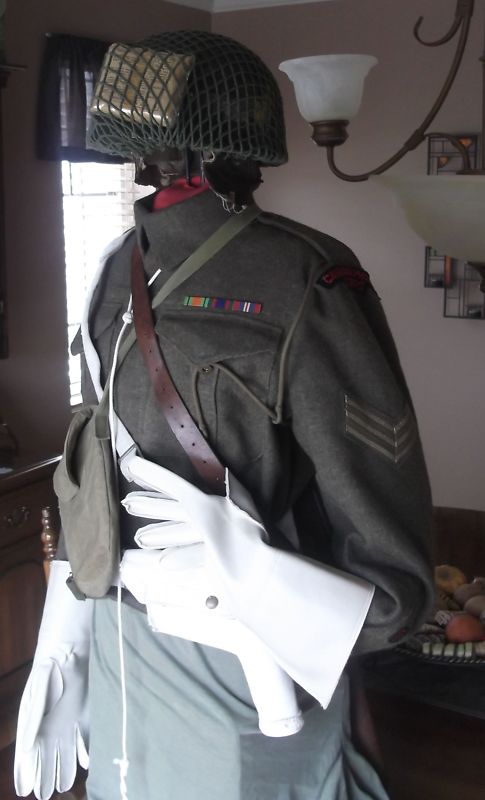 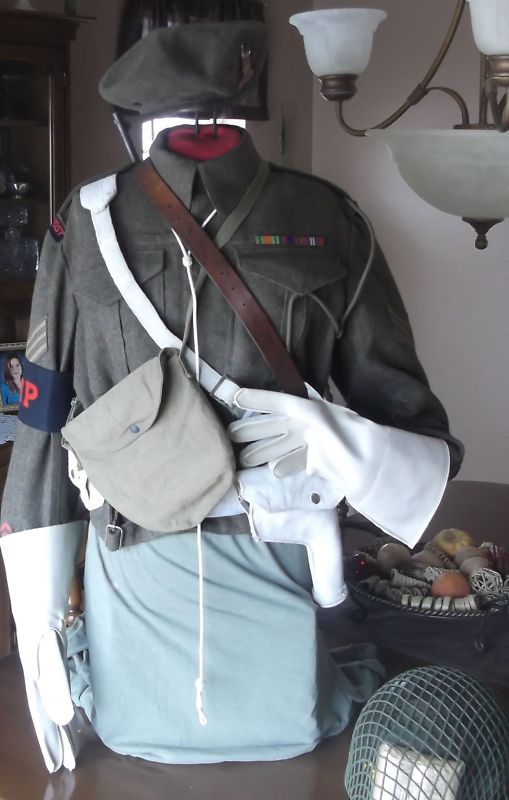 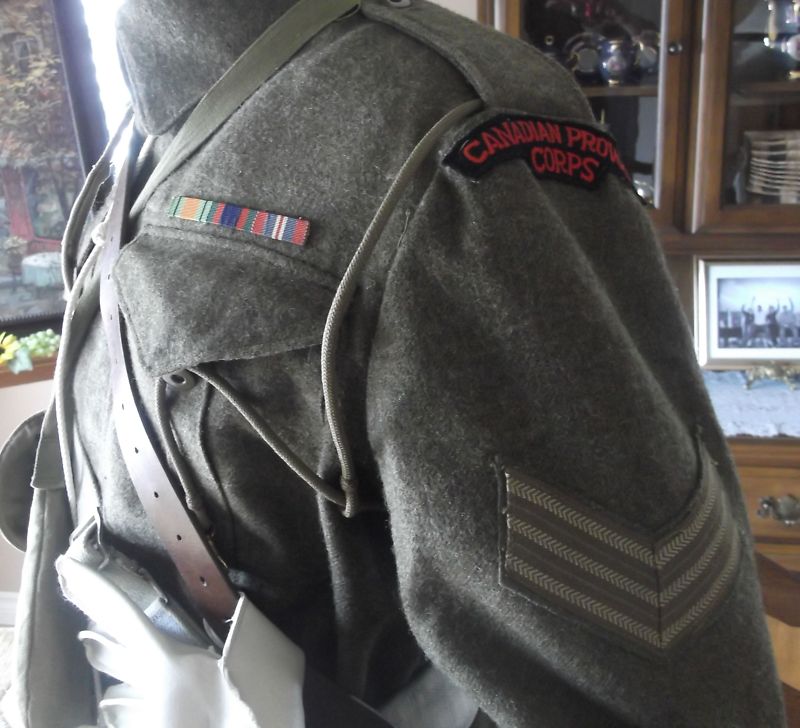 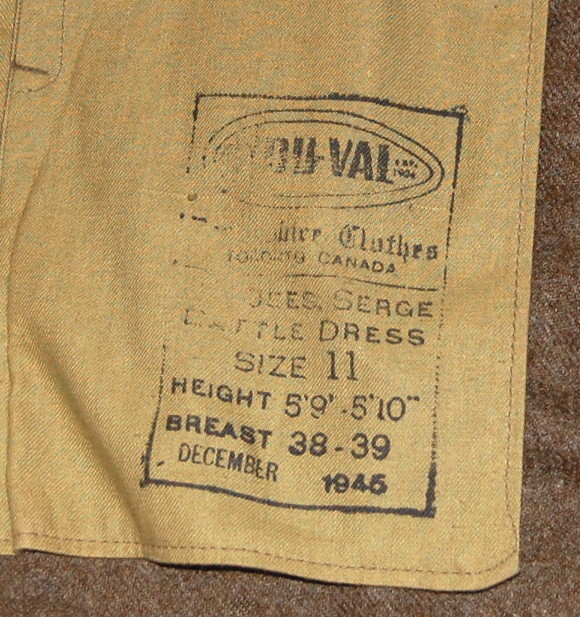 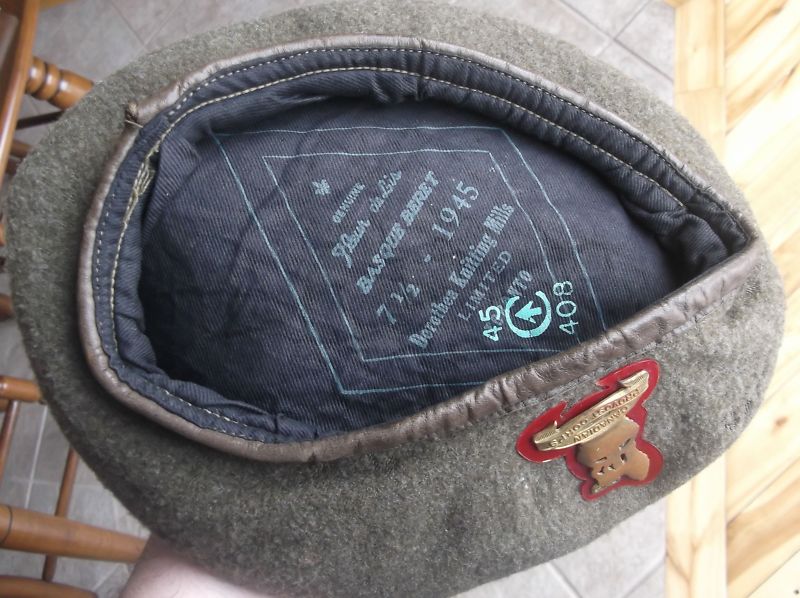 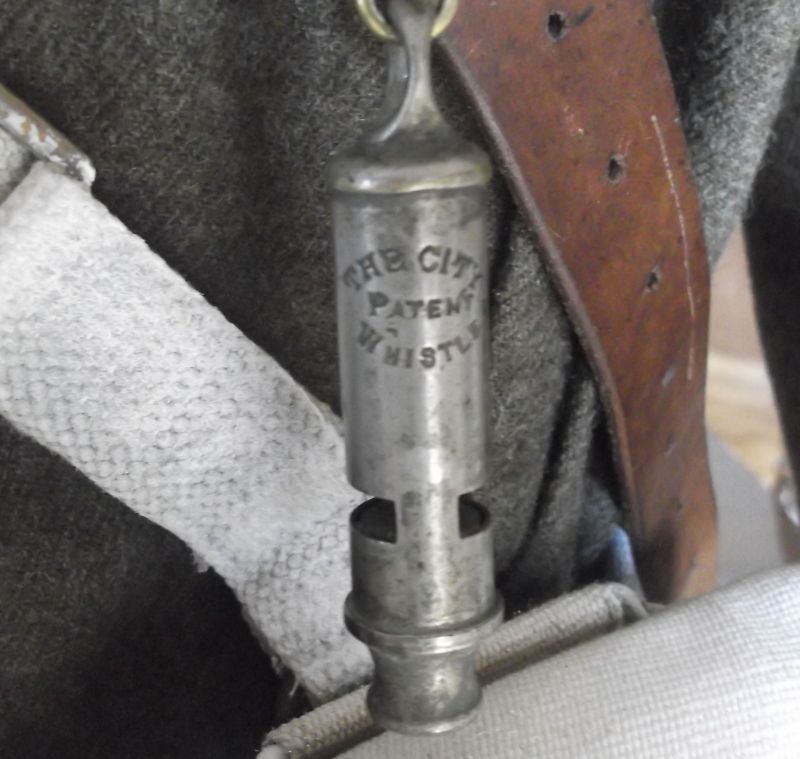 What is hanging off of the leather strap and what is the web pouch on the front for?
thegate

Hello,
on the strape of leather there is a rifle Carcano on 1917 and the Web bag is for a charger of round ammunition.
edstorey

I am unfamiliar with the bag, what sort of charger and what ammunition?
servicepub

Carcano carbines were not issued to Canadians.
The ribbon bar is wrong; For overseas service as indicated by the Defence Medal (1st ribbon) the Canadian Volunteer Service Medal (2nd ribbon) would have a silver Maple Leaf. In any event, the Defence Medal and the War Medal were not awarded until after the war so should not appear on a uniform intended to exhibit a war-time soldier. If the intent is to exhibit a still-serving veteran of the war, then a 1939-45 Star ribbon would be worn. This was originally the 1939-43 ribbon and, along with the Africa Star, were the only other ribbons approved for wear during the war in addition to the CPSM.
Lastly, although the shell dressing was often tucked under the can net of the MkII helmet it is rarely seen with the motorcycle helmet (or the Armoured Corps helmet). This is because the shell dressing was carried in the motorcycle's pannier (and in the AFV for the armoured types).

Hello, the pouch served as bag lightening for the transport of charger of round shape of type thomson.

For Carcano I know that it do not go there

If you could show him(it) an image of the pin which should be on it BD would be kind.
Thank you for the information I takes note(mark).
servicepub

This is the single ribbon that is seen most often in wear by Canadian soldiers in Europe. http://www.ebay.ca/itm/Canadian-Army-War-Medal-Ribbon-With-Silver-Maple-Leaf-Ribbon-Bar-holders-/161006787250?pt=LH_DefaultDomain_2&hash=item257cc09ab2&_uhb=1#ht_500wt_1414

What are the bag details, US or UK manufacture?
thegate

Hello the bag is of manufacturing ground, to copy to the American model
edstorey

Any chance of a photo of the markings?
Sponsored content