You are not connected. Please login or register
+2
kozowy1967
clem01
6 posters

I've purchased few months ago this helmet from an antics dealer. It's a nice CL/C helmet dated from 1940 (early production) with a sort of camo? His owner (name in the helmet) was a french canadian corporal.

I  know few things about this man : He was an armourer, fought during the WW2 (apparently was in Normandy) and was in the army force after the war. Unfortunately, he passed away few years ago. 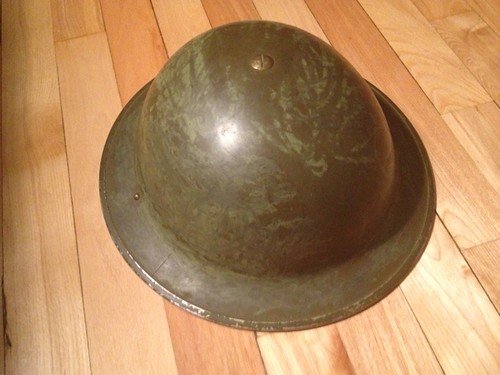 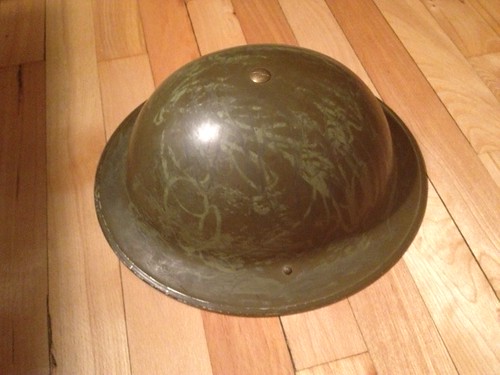 Hi Clem if it is a 1940 it is a nice early C.L./C. would you mind sharing a little more information such as the steel batch number which are of personal interest to me.
Better close up pictures may be more revealing but IMO it is not a camo painted helmet to be quite honest I am not shur what to think of it it is quite odd indeed it is hard to tell but I do not believe the lines to be brush strokes they look to have been put on with a marker or a paint pen perhaps you could share a few more details with us though .

The production number on the shell is 12. 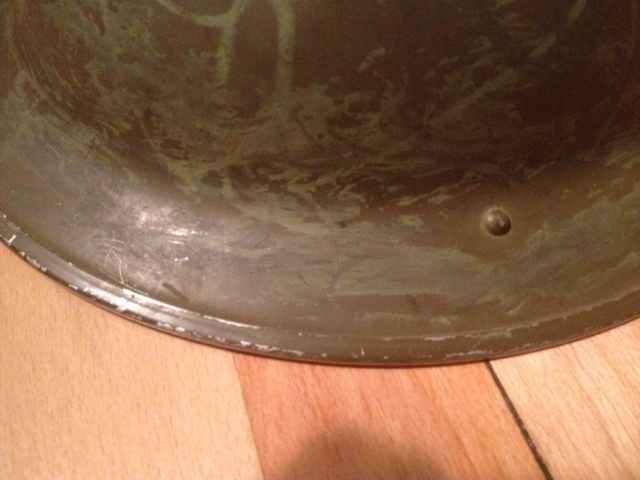 Hi Clem thanks for sharing the steel lot batch number IMO 12 would be fairly early on in production I am still on the fence in regards to the paint but from your new images it almost looks to have been wiped on and or there are light brush strokes can you tell me if there is a small C-/l\ stamp any were to be seen on the exterior of the shell near the chinstrap rivets it would look like my example below on a 40 steel batch 7 as I am trying to discern when they stopped stamping the exterior of the shell with this small C-/l\ stamp thanks. 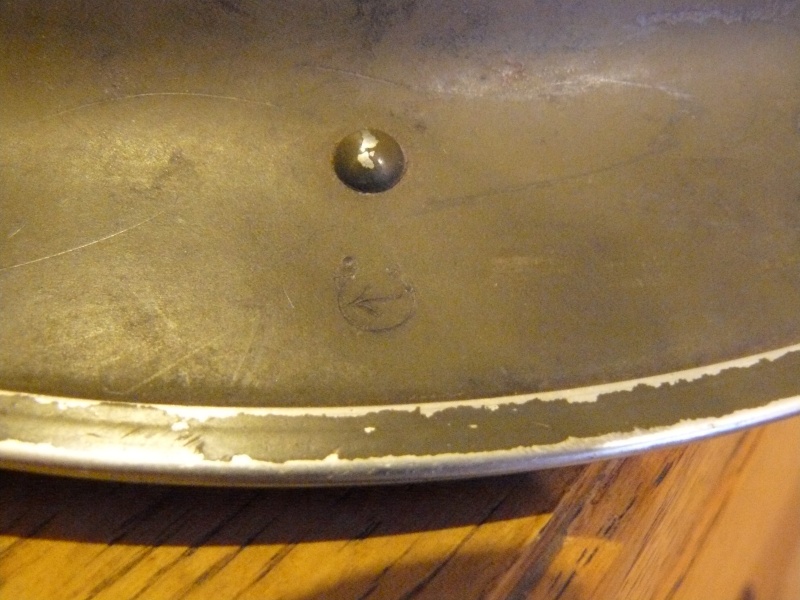 Hard to tell with the paint, but I did not see a broad arrow on the shell...concerning the camo, in my opinion, it has been made with a camo stick and it is old because hard to wash with water or when i try to rub the paint with my thumb. First i was thinking that it has been made by a child after war, but it might be also useful for a soldier during training...without helmet netting (dark and green paints look similar as a two tone net)...
Clément

Thanx Clem it is an intresting Mk II to be shur and the camo stick could be a possibility thanx for checking for the C-/l\ mark for me.

How long were they in service with the Canadian Army?
kozowy1967

Not to shur Ed I have a couple in my collection that date from the early 60's would be intresting to know the exact date.
But if memory serves me correct I do think war time camo paint came in a small tin much like shoe polish seem to remember seeing an image somewere of British commando's applying camo paint to each others faces.

Mk II Helmets were used by the Regular Force until 1960 and Reserves until 1970.

A good look at these images shows WWII Mk II Helmets and nets in use well after WWII with the point being that every time a collector purchases one of these Mk IIs they instantly think WWII, yet they were used by the military for over two decades after that war.

Regarding the Mk II at the start of this post.   What the owner has is a helmet that someone has taken the green loam coloured side of a two-part Post-WWII US camouflage face-paint stick and scribbled all over it.   These sticks were used by the Canadian Army from the 1960s well into the 1980s.
kozowy1967

LOL sorry Ed thought you were talking about the use of camo sticks and yes you are correct of course on the Canadian MkII and the time frame .

Ed you raise a very good point on the Mk II and the use of the two tone net with or with out scrim I do have a few examples in my collection and as you have pointed out the possibility does exist that some very well could have been used postwar as is evident by the images you have posted.

"Regarding the Mk II at the start of this post.   What the owner has is a helmet that someone has taken the green loam coloured side of a two-part Post-WWII US camouflage face-paint stick and scribbled all over it.   These sticks were used by the Canadian Army from the 1960s well into the 1980s." quote Ed

very useful insight Ed, I couldnt put my finger on it as to what was used to camo this helmet, agree have to have an open mind on Commonwealth Helmets because of their extensive use over a long period.

Mark, I remember someone mentioning about the two tone knotted nets and they were still in use in the 80's, as he had one on his helmet in the army at the time

Interesting bit of info John I did not realize that they were still being used that late on I was thinking more the late 60's just goes to prove there is still always something new to learn in the field of Canadian Militaria collecting and Canadian military history.

Thanks for your comments.

MkII helmet used after the war have a shiny dark olive paint (you can easily see it on the last image and the one with the medic because light is shining).

I have often seen shell dated from 1942 used after war with the dark olive paint, and I am very surprised that a 1940 production (which is very early) might be not use during the war, instead of 1942 shell...

I was thinking that Bi-tone camo stick were also used during the war by the US and the british (like on pictures of paratroopeers...) ?

There was also a M1 shell with the front beam (ww2 production but with a very high serial number) in the lot form the same man when I buy the helmet, but I'am quite sure it has been used after the war...

There were still some Mk II's kicking around the Alq Regt in the early 80's.
kozowy1967

Hi Clem I have seen 1940-1943 helmet bodies post war repainted in either the semi gloss or dark green gloss OD green paint.
As 1942 was the highest production year by far for Canadian Mk II it would only make sense there were way more in circulation post war as well
And I was always under the impression that that the two tone camo stick was a post war invention the earliest examples that I have in my collection date from the early 60's .