Hi guys,
I am being offered this sword and I was hoping to get some input from
some of the guys who know edge weapons. Sellers description...
"gold plating over brass, as is the case with my sword. Many
swords just have shiny brass. The same goes with the accoutrements:
sword knot is gold bullion, scabbard is leather, and carrying case is
chamois lined leather (not vinyl).

I notice the sword hilt has a Kings crown over anchor, while the blade has a Queens crown..is this normal? 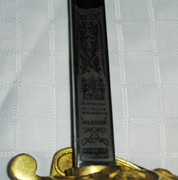 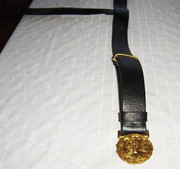 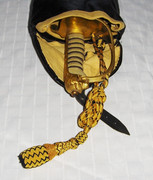 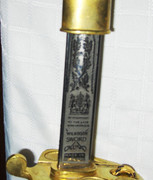 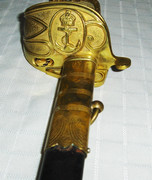 It's a beauty, and interesting. The mix of crowns is undertandable for the period, although as far as Navy swords go, would make it somewhat rare i would think (although whether that means it is worth more I don't know). Judging by the inscriptions on the blade, I am sure the sword can be dated to 1952 on the nail. Note that the royal appointment mark on the ricasso says "BY APPOINTMENT TO THE LATE KING GEORGE VI", but with the cypher of Queen Elizabeth II. This would all suggest that the King had just died when it was made, with all the pre-made parts (i.e the guard assembly) still bearing the old crown but with the blade etching up to date. It is likely Wilkinson didn't yet have Elizabeth's royal patronage, and so couldn't say 'by appointment' to her. Basically its a nice transitional piece.