Highland Uniforms of the CEF

Highland Uniforms of the CEF 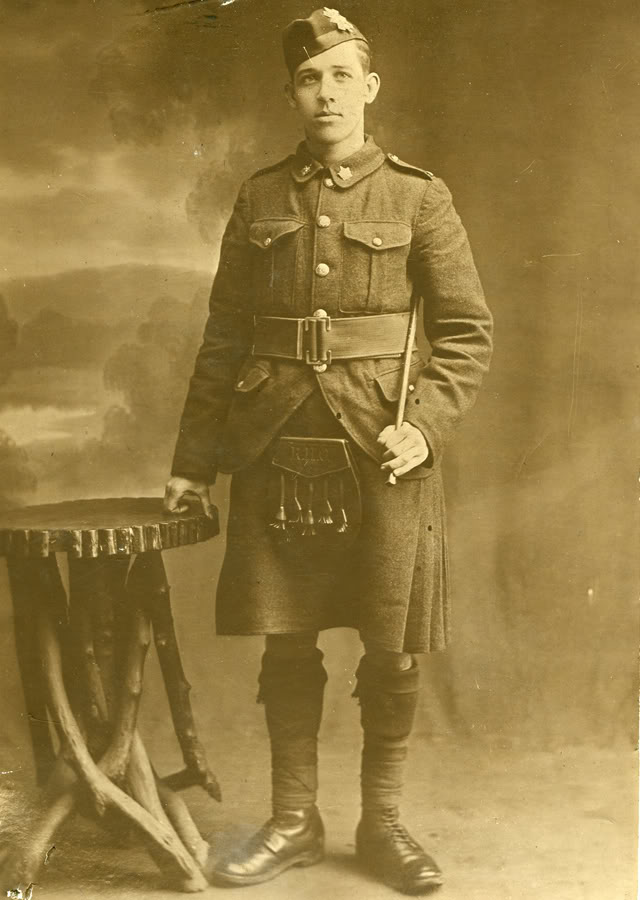 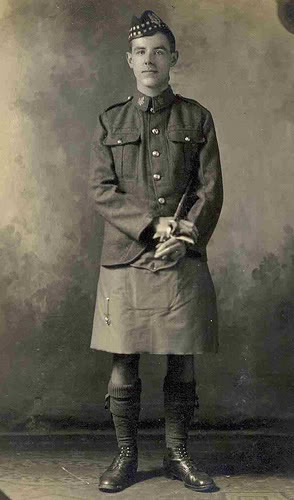 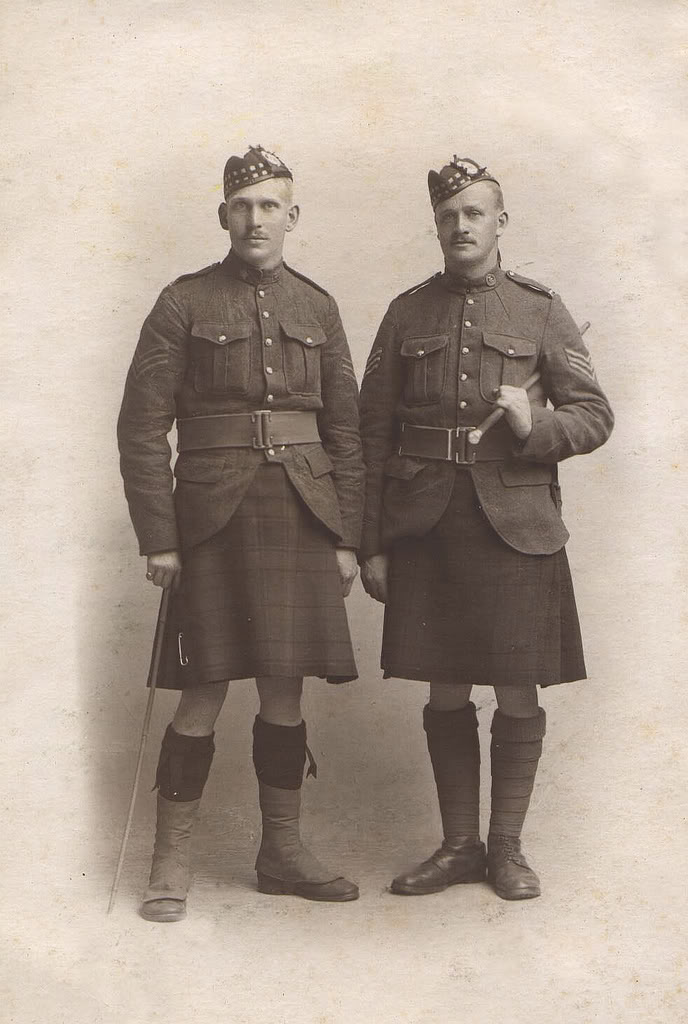 The Highland Regiments of Canada:

The Pictou Highlanders
1954 merged with the Nova Scotia Highlanders (North) 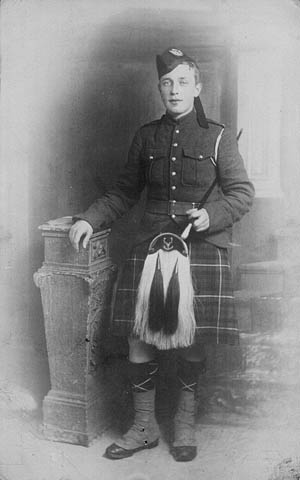 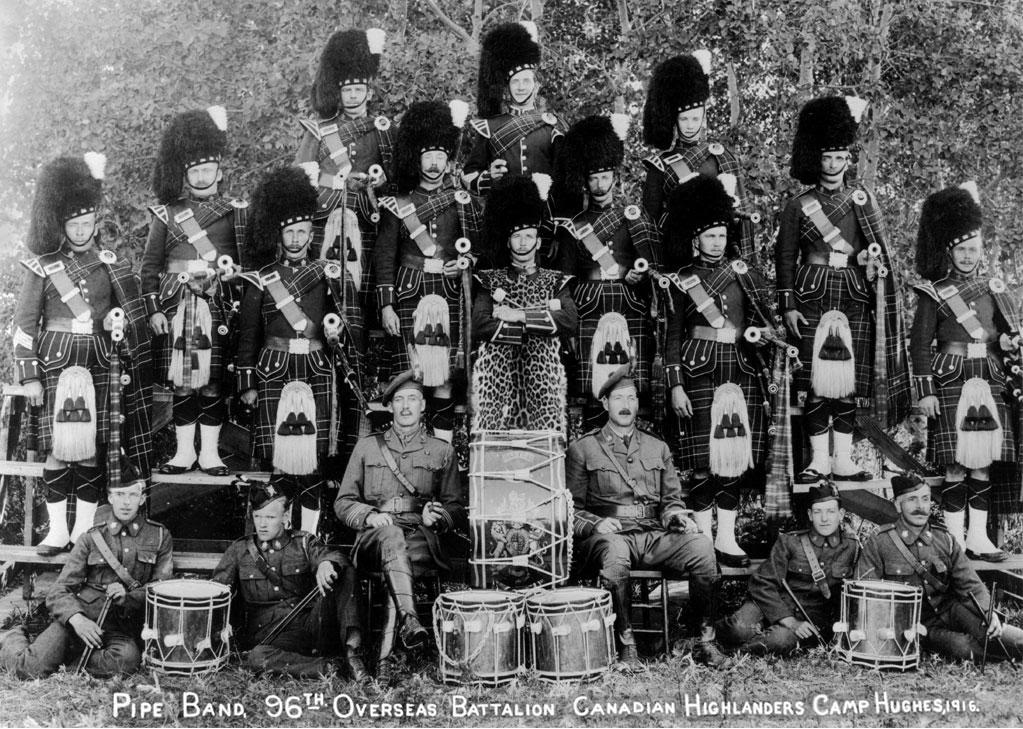 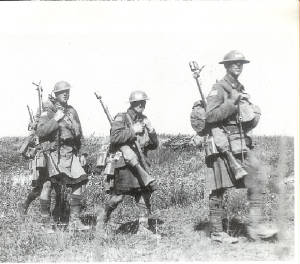 In 1916, the 236th Overseas Battalion, (The New Brunswick Kilties, - Sir Sam's Own), C.E.F. (Canadian Expeditionary Forces) began life as a New Brunswick based battalion (their correspondence, and newsletters referred to them from the beginning, as the Maclean Kilties). The original "...idea of having a battalion of Scottish Highlanders represent the Province of New Brunswick", was that of Lieutenant-Colonel Percy Guthrie. The idea struck him when he was "......lying in No. 2 Canadian Stationary Hospital in France, upon hearing the skirl of the pipes as a Scottish Battalion passed on it's way up the line". According to Guthrie he was promised assistance by no less than the Prime Minister of the day, Sir Robert Borden, and the Minister of Militia, Sir Sam Hughes, (hence Sir Sam's Own) while in hospital.

When sent home (he was born and raised near Fredericton), on medical leave he began to put his plan into action. Even though WW 1 was well into it's 2nd year, and those most anxious to fight had already gone overseas, Guthrie believed in the "lure" of a Scottish regiment. He was not the only one. Although the Kilties came into existence on May 15, 1916, they were not allowed to recruit until six other battalions had filled their ranks. The Officer Commanding feared that "....the new unit with it's pipes and kilts...." would be too popular! When finally allowed to start recruiting, the leaders of the new unit made full use of this allure. Although a new unit, the vast majority of it's officers, and NCO's were overseas veterans, many who had been wounded. This increased their appeal to men who were raw recruits. One of the promises to the men, was that they would "fight as a unit". The campaign included not only wounded soldiers exhorting potential recruits, but a fiery St Andrews Cross, which was taken by car, horse and foot all around New Brunswick. As the "piece de resistance" at 8:00 o'clock, at each of fifteen locations, on the first day of recruiting ".....a little girl dressed in the tartan of Clan Maclean, opened the meetings by reciting "Fire the Pile on Craig-Gowan Height", at which time huge bonfires were lit on the highest summit nearby. Clan traditions, or at least how they were remembered, were effectively used! Perhaps paramount was the appeal to the "fighting spirit" and pride in Scottish Highland roots. The pipe band, and the distinctive kilt emphasised these sentiments. One hundred years after many of these men's ancestors had immigrated to Canada, (- and some subsequently to the United States,) "the blood is (was) strong, the heart is Highland" (Canadian Boat song).

The approach was effective, but alas, there were simply not enough eligible men in New Brunswick to bring the battalion to full strength (over 1000). The next step was to recruit across Canada. Plans were set in motion to convey the appeal across the land. After only two months of "Dominion" wide recruiting, other battalions began "....sending protests to Ottawa, urging that the MacLean Highlanders were gobbling up the recruits they would otherwise have obtained, which resulted in the authority for recruiting outside of New Brunswick being cancelled...." (Pg 12 -13 war record 236th Battalion, O.M.F.C. MacLean Highlanders).

Meantime, the Kilties had established themselves in Fredericton and had begun working on Old Government House to make it suitable for a Barracks, and training headquarters. The Kilties had agreed to refurbish the residence, if they were allowed to use it, AND if it could be used after their departure for a convalescent home for returning, wounded veterans. I understand this in fact did come to pass. This is the same building now (again) the residence of the Lieutenant Governor of New Brunswick, and also site of the Fredericton Highland Games.

More men were still needed. Now what? Because of the large number of Maritimers who were working in Maine, and in the "Boston" states, - and the fact that the U.S. had now declared war, the battalion wisely saw the potential of cross border recruiting. The Kilties continued to be tremendously successful and innovative recruiters. The name was promptly changed to the Maclean Kilties of America, and off they went. Pipes and kilts were again to the fore! Clever appeals to local politicians (of Scots or celtic descent), to Scottish Associations, and adroit use of newspapers led to a tremendous response. Within 11 days over 1600 recruits were signed up. Those of American birth were passed over to U.S Recruiters, some were funnelled to other Canadian and British units, and the Kilties themselves ended up with over 500 men. Over 1300 applications were received for enlistment from Boston alone. It was noted that Col. Guthrie did a recruitment speech before a ball game between the Red Sox and the Detroit Tigers, at which time he presented a swagger stick to (amongst others) the famous Ty Cobb!

The battalion was now up to strength, and was posted for further training in Valcartier, Quebec. This training was continued in Quebec City and in Montreal. The Battalion some 1087 strong, embarked for England on HMT (His Majesty's Troopship) "Canada", and arrived in Liverpool on November 19, 1917. A final name change resulted in the battalion becoming the 236th O.S Battalion, C.E.F. MacLean Highlanders. (I have pictures of hat badges with the insignias of both the "New Brunswick Kilties", and the "MacLean Kilties of America", but am not sure if hat badges with MacLean Highlanders were ever created).

So why were they the Maclean Kilties, or Highlanders - as opposed to the MacDonald Kilties, the MacLeod Kilties, or any of the other common Highland Scots names in Atlantic Canada? The obvious answer is they wore the Maclean of Duart dress tartan. But why? Three factors probably influenced the decision. The best known military man in New Brunswick at the time was the Government Officer Commanding New Brunswick troops - Brigadier General HH MacLean, - who had also been a successful politician! - and the first named person in an article (from the initial Breath O' the Heather, the Battalion newsletter) entitled "Some Patrons of the Kilties" was Lt. Col Angus McLean M.D. He gave funds for "... recruiting, publicity and for equipping the regiment in the kilt of the Maclean of Duart...". Finally, and one can never underestimate the power of mothers, Colonel Guthries' mother, was, you guessed it, a MacLean.

The high point at Seaford Camp was an inspection by Sir Donald Fitzroy Maclean, the Chief of Clan Maclean. He presented the battalion with two beautiful pipe banners, one bearing his arms', and one the battalion crest. The current Chief of the Macleans, Sir Lachlan Maclean, told me that at that time, they had presented Sir Fitzroy with a sgian dubh, which is still at Duart Castle, along with the colours.

By the end of February, they were passed as ready for France. Soon after in March, 1918 they went. Despite many protests from the officers, the men, from Scottish Association(s) in Canada and the U.S., even from His Majesties Consul General in Boston, the battalion was broken up and used as reinforcements for those battalions already in France. The only concession was that men from New Brunswick were given the option of joining the New Brunswick Regiment, while the majority were allowed to transfer to another kilted regiment, the Black Watch, Royal Highlanders of Canada, part of the 20th Canadian Reserve Battalion. At least one of the men, a New Brunswicker, Charles Cromwell, and his pipes "played into Mons, Belgium at 7:30 AM November 11th, 1918 Armistice Day".

To quote E.S Garner in his article on the MacLean Kilties (Crown Imperial no 46, Spring 1987) "I have no doubt that it made sense logistically to maintain the strength of existing battalions. (However) Napoleon, I think, knew more about soldiers than most, and his dictum that morale was to material, in the proportion of three to one, encourages my own thought that logistics might have given way to sentiment on this occasion". Hear! Hear!

You will note that Piper Richardson is wearing a Seaforth uniform here. He was one of hundreds of Seaforths who served in the 16th Bn CEF.