Memorial Day: Seen By Few, Forgotten By Most

Memorial Day: Seen By Few, Forgotten By Most

Today Americans celebrated Memorial Day. This year celebrates the 150th Anniversary of the start of the American Civil War. Since 1861 tens of thousands of Canadians have served in the US Armed Forces and fought in their wars. Today these veterans are also remembered.

On days like today, Memorial Day, perhaps these veterans are the ones most forgotten.

American soldiers and Marines walking combat patrols in Afghanistan have suffered a surge of gruesome injuries, losing one or both legs and often their genitals to crude homemade bombs Taliban insurgents bury in dirt roads and pathways.

In some cases, American military surgeons tell The Huffington Post, these traumatic amputations occur so close to soldiers' hips that it is difficult to fit prosthetic legs, severely limiting the patients' future mobility and rehabilitation. In addition, the loss of sexual function for formerly healthy young men in their early 20s causes severe anxiety and depression and can wreck new marriages.

The latest wave of severe injuries comes after Gen. David Petraeus ordered U.S. troops in Afghanistan last year to get out of their protective armored vehicles and start walking. "Patrol on foot whenever possible and engage the population," he directed in guidance to his troops last August.

The order was hailed as an essential counterinsurgency tactic used to get closer to the people, pick up intelligence more effectively and demonstrate American resolve to protect local villagers from Taliban insurgents.

But the enemy -- as Petraeus himself is fond of saying -- gets a vote, and the insurgents have attacked the dismounted patrols with a vengeance, planting lethal bombs inches beneath the dusty soil where a footstep can detonate them in blinding flashes.

Insurgents often make the bombs using a plastic bucket packed with explosive ammonium nitrite fertilizer and a simple "trigger" made with two sticks of wood or a discarded plastic bottle that completes a circuit and detonates when crushed. The crude components make the bombs more difficult to detect than those once made with metal parts.

Improvised explosive device (IED) attacks against dismounted troops have skyrocketed, from five in April 2009 to 210 in April 2010 to 376 this past April, according to data gathered and analyzed by the Pentagon's counter-IED agency, the Joint IED Defeat Organization. JIEDDO counts "attacks" as IEDs detected before they explode, ones that detonate without causing casualties and ones that kill and maim.

Because dismounted troops walk with their weapons held out in front of them, an IED detonation often blows off the extended arm as well as both legs, according to Army medical staff.

That was the case with Marine Cpl. Tyler Southern of Jacksonville, Fla. He was 20 when he stepped on an IED that detonated with 10 pounds of homemade explosive in a village near Musa Qala, southern Afghanistan, in July 2010. The explosion was so big "it should have left me in pieces," he told The Huffington Post.

It almost did, tearing off both of his legs and most of his right arm and severely lacerating his left. During subsequent medical care he flat-lined twice, with medics each time managing to bring him back to life before he reached the Bethesda Naval Medical Center four days after the attack.

The number of dead and badly wounded IED survivors like Southern grew so rapidly that when Lt. Gen. MIchael Barbero took over JIEDDO in March, his operations research chief, Dr. Caryl Brzymialkiewicz, got in to see him promptly. "Boss, we got a problem," she told him.

The good news, she reported, is that American troops are adept at finding the buried IEDs. In April 2009, American and allied troops discovered only one out of every five IEDs before they detonated; the rest blew up harmlessly or killed or wounded troops. This past April, thanks to better training and improved detectors, the troops found and disarmed 79 percent of known IEDs, leaving only four percent to cause American or allied casualties, according to JIEDDO data.

Yet the sheer number of IED attacks means that even as troops find more of the bombs, casualties still skyrocket because of all of the devices left undiscovered. IED attacks caused casualties to dismounted U.S. and allied troops to rise from 93 recorded in the first nine months of 2009 to 368 in the same period last year, according to JIEDDO data released exclusively to The Huffington Post.

Among those casualties was Marine Sgt. Johnny Jones, 24. A bomb disposal expert, he was on a foot patrol in southern Afghanistan last summer when he stepped on an IED. The blast threw him into the air and he landed on his back in a deathly silence. Both his legs were gone and his right hand was nearly severed. The Marine next to him, Cpl. Daniel Greer, was alive but barely breathing, and later died.

As the attacks increased, surgeons at the Landstuhl Regional Medical Facility in Germany, where casualties are first brought from Afghanistan, tracked a growing number of severe wounds among patients arriving from the battlefield. Those with traumatic amputations -- in which one or more limbs has been blown off in combat -- increased from seven percent of all casualties in 2007 to almost 11 percent last year. Wounds to the genitals and urinary tract rose from 91 patients in 2007 to 142 last year.

The Defense Department does not release precise data on the effectiveness of IED blasts, because such information would be valuable to Taliban bomb-makers. But the Pentagon's public accounting of Afghanistan war casualties shows that American battle deaths from IEDs rose from 152 in 2008 to 275 in 2009 to 368 last year. Since late 2001, IEDs in Afghanistan have taken the lives of 683 Americans and severely wounded 6,670.

"We've seen a dramatic increase in the number of service members who have not only amputations above the knee but what we call hip disarticulation, meaning they have no femur at all," Dr. Paul Pasquina, chief of orthopedics and rehabilitation at Walter Reed Army Medical Center in Washington, D.C., told The Huffington Post.

"So not only are they losing their legs, but half of their pelvis. And we've seen a dramatic increase in the numbers of casualties returning with testicular injuries or genital loss, and that has severe life-long implications" for these wounded troops, Pasquina added. Today, the patients at Walter Reed include at least four quadriplegics.

Soldiers and Marines arriving at Walter Reed with both legs blown off usually suffer other extensive injuries. Shrapnel perforates the abdomen, dirt and filth are driven deep into wounds and soft tissue; in some cases, the explosion tears away large patches of skin in an injury called "de-gloving." Heterotopic ossification, or bone growth in fleshy areas, can severely hamper the use of artificial limbs. Infections set in; blood clots can form. And in most cases, the patient arrives with moderate to severe traumatic brain injury, which can hamper rehabilitation.

"There's just challenge after challenge, sad story after sad story," said Pasquina. "But at the same time we have had remarkable success, and pretty much 90 percent of it is attributed to the courage our service members have, their determination to recover and reintegrate back into society."

But the loss of sexual function can be "devastating," said Bo Bergeron, chief of physical therapy at Walter Reed. "It's a pretty big issue when a guy finds out he can't have any more kids -- and the spouse is sitting there," she told The Huffington Post. In common cases where a young wife has quit her job and flown with the kids a thousand miles to sit at the bedside of her now-disabled husband, "the family situation already is pretty tenuous. It's just very very difficult," she said. The divorce rate among married patients is above 50 percent.

Despite such challenges, the amputees at Walter Reed tackle their rehabilitation with aggressive cheer. Many wear T-shirts emblazoned with a fiery explosion and the phrase, "I had a blast," designed and distributed by Tyler Southern and his father. High-tech, powered prostheses help many of them regain athletic prowess. It's not uncommon to see amputees sprinting down the hallways; several who once played ice hockey have been fitted with artificial legs with skates attached.

But in Afghanistan, the problem -- and the danger -- remain unabated. Much of the money the United States has spent to counter IEDs in Afghanistan has gone to a dizzying array of high-tech devices, ranging from miniature robots to sensors mounted on aerostats and on unmanned drones. Dismounted patrols work with hand-held detectors like the Vallon, which uses ground-penetrating radar to hunt for non-metallic bombs, and with trained sniffer dogs.

But JIEDDO found that while it had saturated U.S. ground combat units with detectors and other devices, training had fallen behind.

"We have focused on pushing these equipments and enablers and detectors out to the theater -- and that's the right answer," Barbero told The Huffington Post. "But that creates a challenge of training."

In some cases, he said, the first time soldiers and Marines see the new equipment is when they show up for duty in Afghanistan.

JIEDDO is accelerating training for troops bound for Afghanistan, with focused pre-deployment exercises at the Army's National Training Center at Fort Irwin, Calif., and the nearby Marine training base at Twentynine Palms, Calif. "There's a lot of forward momentum on this," said Brzymialkiewicz. "We know what drives early detection is visual: a well trained soldier."

But in the struggle with IEDs, she added, "there is, of course, no silver bullet." 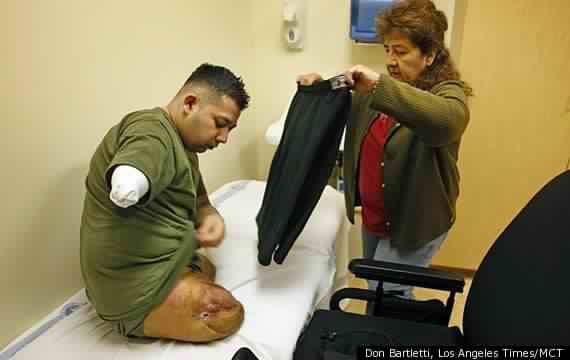