You are not connected. Please login or register
+3
Tankermike
Ian B
pylon1357
7 posters

Not something you see often

Not something you see often

Here is a SWW weapon that thankfully didn't get used during the war. It would have been filled with a mustard agent and was initiated by a bursting charge running down the center. As far as I can tell these are very uncommon on the collector's market and the only other one I have seen for sale was a white painted training model. The grey color indicates that this is an actual mine and not a training version although I don't know what would be different other than the chemical filler. 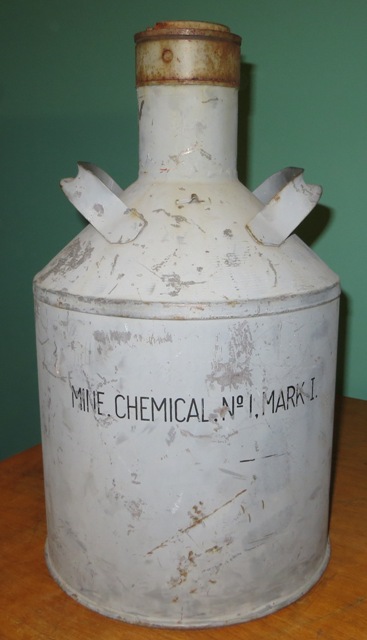 That is indeed a very rare beast! Nice piece of ordnance.

It feels empty and I'm certain that it is but I'm still a bit reluctant to open it and look inside....
edstorey

Make sure you are wearing a Respirator when you open it.
pylon1357

I don't know what the heck to think about this piece. I do know I find it very very interesting. I honestly know nothing about this all. The idea that it could be loaded, has the crap scared out of me. I can almost visualize the headlines in the Edmonton Journal. LOL
_________________
Cliff

My suggestion, for what it's worth.

First, IF the mine has not already been made inactive, I would recommend NOT trying to do anything yourself.  Leave it to experts. If it has been deactivated, then it's all good.

Second, IF still active and you want to keep it in your collection, and if you still have the paperwork that proves your ownership, then you might want to consider contacting either the nearest CF EOD folks, or a similar civvie organization to see if they can make it inert.  Curators of any local military museums might be able to steer you in the right direction.  I would suspect that if anyone can make it safe, you might expect it to be returned with holes and markings to indicate that the mine is "INERT".

Third, if you do go forward with this, I would suggest that you be prepared to have the item confiscated, either temporarily while you argue to get it back, or permanently as the government doesn't want stuff like this in private hands.  Personally, I believe that within reason, as long you harm no one with items in your possession, you should be able to collect anything you want to.  I'm just saying to be prepared to give it up, is all.

Hope this has given you something to think about.  Maybe you've thought it all through already and have decided on a course of action.  All the best.  Stay safe and have fun!

Interesting piece, would it be buried up to the neck and a pressure device be used?
Infanteer

I haven't been able to find any official documentation on these devices but my understanding was that they were used as area denial devices. Although called a mine I believe they were intended to be remotely detonated on the surface. Would love to find some period literature.
edstorey

Look for Military Training Pamphlet No. 32 The Tactical and Technical Employment of Chemical Weapons - Part V The Chemical Mine - 1940.

Nice! Thanks Ed, at least I have a direction to move in now.
ypres

The mine would have the following class of chargings marked as described (All 1.5 inches wide)

The mine may also have supplementary band markings (All 0.5 inches) below the bands indicated above

The mine would also have markings indicating the type of varnishing inside VAR, UV (Unvarnished), BV (Bakelite varnished).

There would also be a filling date and a lot number.

The mines can be electronically detonated (immediate) or using a matched fuze (7 min delay), The mine is intended to contaminate a small area. The initial explosion throws the mine into the air and it is broken open.

This is provided as information only and should not be used as a comment on whether the mine described in this thread is live or not. I am not an expert in ordnance and this post is just for information purposes.

If  there is a collector who would like a training version of this mine. I have one available but it must be picked up as I will not send it through the mail. Send a pm if interested.

I wish i could buy that from you :(
Infanteer

Excellent details Ypres! Thank you very much. Can I ask what was the source of your information?
ypres