Well it has been a while since I posted anything new, as I have had to curtail my collecting considerably  due to the fact my lovely wife is making me live up to an agreement we made after  the Applegath MC acquisition.

Most of these are KIAs, in fact all are except a single BWM to a man from the 39th Bn.
The memorial Plaque and BWM are a broken group to Pte John Crosby, originally of the 180th Bn. It came with quite a large amount of original paperwork, including a couple letters home from him, and a letter to his mother from an Officer explaining his loss. Missing are his Victory Medal and Memorial Cross, and of course the Memorial Scroll. Crosby shares an erie similarity to another group in my collection, that of Pte. George Gilmore. Both were original 180th bn men. Both transferred to the 29th Bn, both reported wounded, missing, presumed dead, Both have no known grave, both died the same day August 21, 1917.
To the left of this, is a group to Harford, an original member of the 208th Bn. He was KIA with the 58th Bn.  This group is nice in that although it missing the Victory Medal and the Plaque, it has his Cross, BWM and Memorial Scroll.

The single BWM in the bottom left is named to Kerrigan (Stuart) He was also an original member of the 180th Bn. Killed with the 123rd Pioneer Bn. Beside this single is his brother Charles medals 14-15 Star and BWM. He was also killed, but was an original member of the 15th Bn. Both of these groups are missing the VM, Memorial Cross, plaque, and Scroll.

The other single BWM is full entitlement to A/CPL A Ogilvie, of the 39th Bn. Which fills one gap in my numbered battalion collection.

I have a lot of work ahead of me here with these latest arrivals, plus, I have a pair coming from an original member of the 60th Bn. I probably should not mention anything about the single Memorial Cross to Johnson originally of the 208th or another single to an original 180th Bn member who was transferred to the Canadian Engineers. 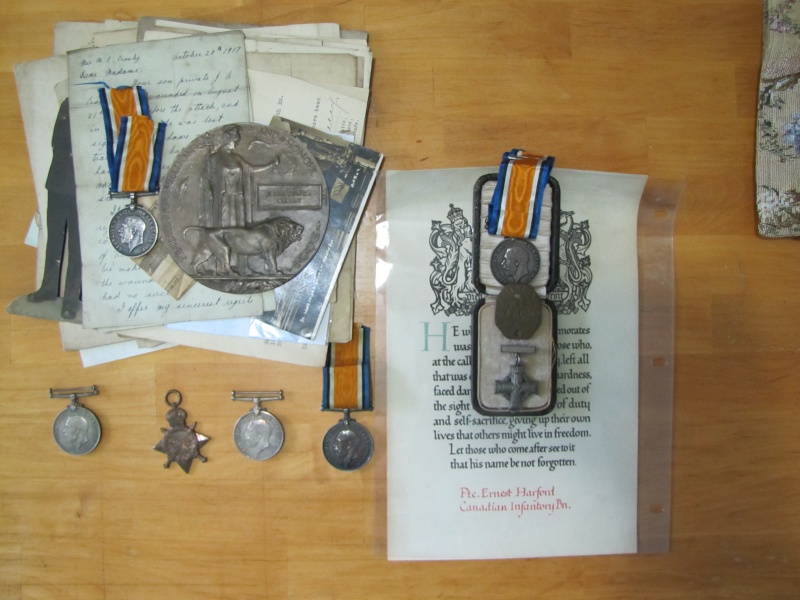 Thanks Todd, that map cabinet is filling up far too quickly. LOL Normally I would pass on broken groups but since these are mainly 180th and 208th men, I had to add them to my collection.

If my wife ever opens that cabinet, I am as good as dead.

Mike, the collection is growing faster than my back account balance at the moment. I had a long drought of adding men to my two battalions, these were all acquired within the last 2 weeks.
_________________
Cliff

There was 17 of those cabinets auctioned off out this way last week. I thought of bidding but 17 was too many .

Nothing wrong with single medals, especially to battalions you collect. Just imagine how excited you will be if you find the mate(s).

I too had a good run at acquiring this past winter. My roof needs replacing and I have an Ottawa trip in 2 weeks, so things are slow for me too. Ill be back at it this fall.
Sponsored content