I thought I'd take a few side-by-side shots of Canadian-made Mk VI and Mk VII Waterbottles.

This first photo shows a 1941 dated Mk VII bottle (Left) and a Mk VI bottle (right). As you can see, the Mk VI has a flatter economy tin-can top. both bottles have think khaki felt covers, though the Mk VI is a browner shade and the Mk VII is closer to gray (this does not show up well in this photo, due to lighting). 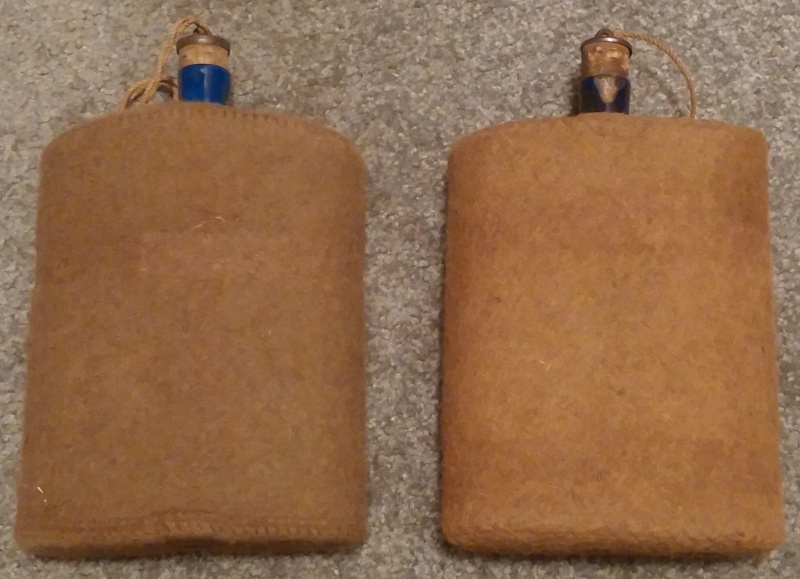 This photo shows the a close-up of the spouts on each bottle. The Mk VI bottle (top) has a stopped cord that is sewn onto the cover, while the Mk VII bottle's stopper cord (bottom) is attached to a metal staple on the shoulder of the bottle. 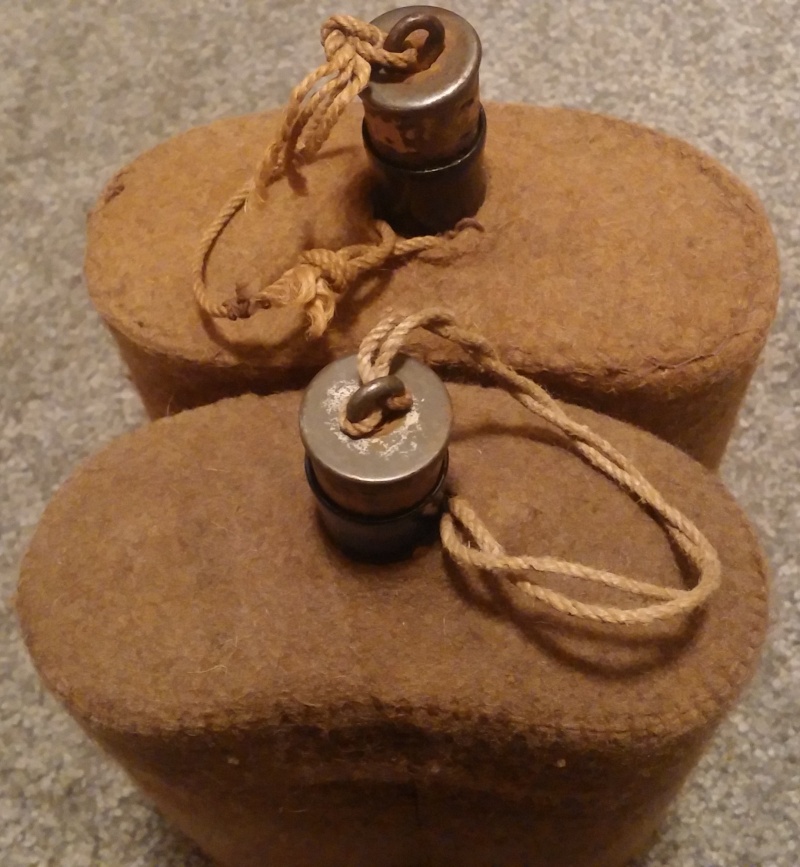 This photo shows the markings on the covers of each bottle. Both covers bear Canadian Broad Arrow acceptance marks that are difficult to read. The Mk VI bottle (top) shows a shield (or possibly a maple leaf) with what appears to be a date (possibly 1918), while the Mk VII bottle (bottom) is stamped "G.S.W. ~ 1941" inside an oval. 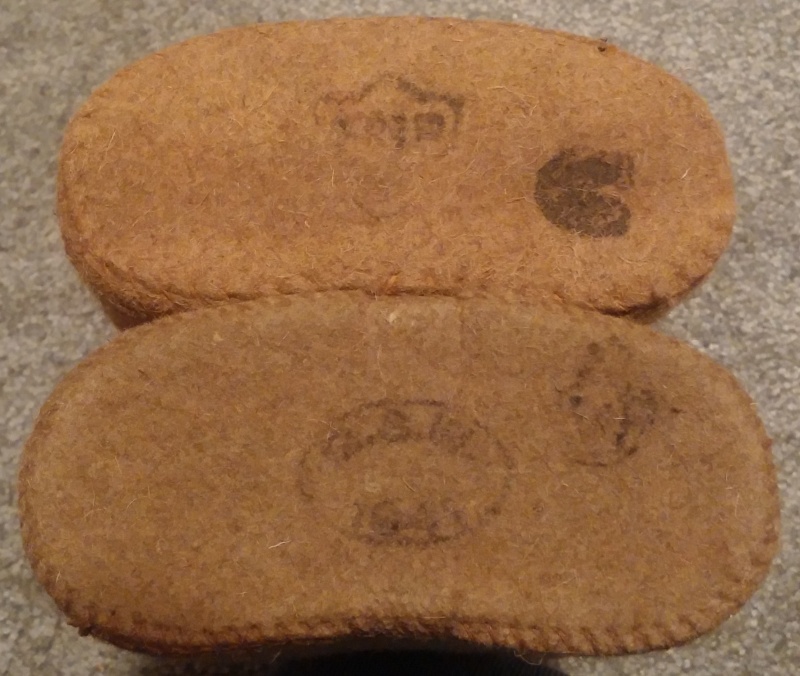 Here is a close-up of the stamp on the Mk VI bottle. If anyone has any thoughts about it, I would be greatly appreciative! 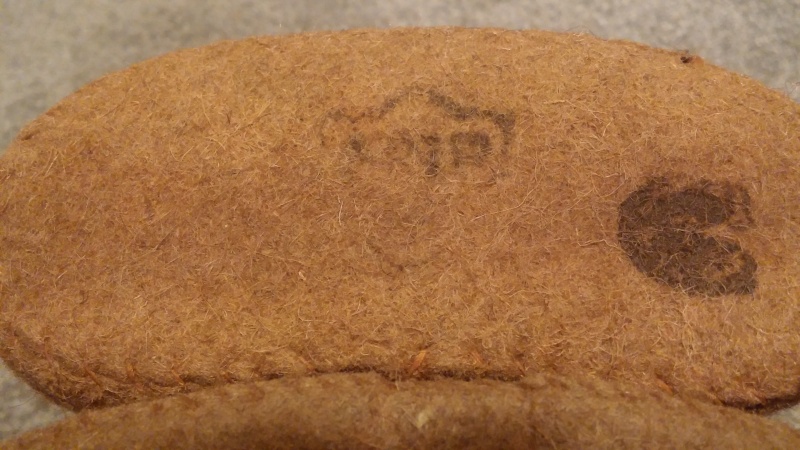 I thought that the shield or maple leaf shape looked familiar, then it struck me that I have seen a similar shape on Canadian-made enamelware... 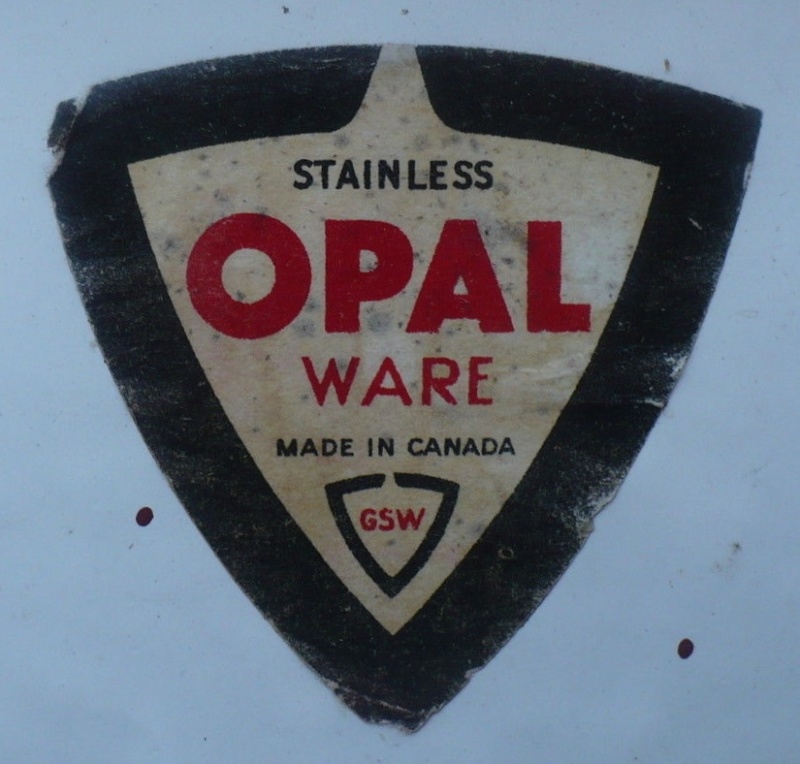 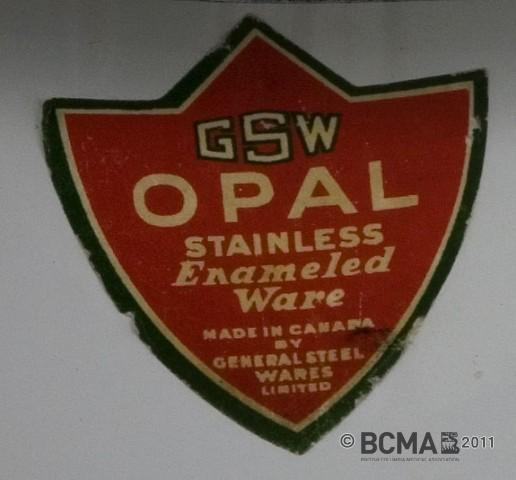 I thought that both bottles were made by General Steel Wares, with the earlier Mk VI bottle being made under their Opal Enamelware line. However, GSW was formed in October 1927 by five companies (McClary Manufacturing Company, London, Ontario; Sheet Metal Products Company of Canada Limited, Toronto; Thomas Davidson Manufacturing Company Limited, Montreal; E. T. Wright Limited, Hamilton, Ontario; and A. Aubry et fils Limitée, Montreal). Perhaps the maple leaf was used by one of these predecessor companies and the markings inside of it stand of that firm, like SMP for Sheet Metal Products.

Any thoughts would be greatly appreciated!
48th

Great write up as always. Amazing information in there. I will have to take a second look at the water bottles in my collection. I have not seen one date stamped on the bottom like your example.

GSW made all kinds of products for the war. I see their name on every thing it seems.
Wgrenadier

Thanks 48th! Most of the GSW examples that have their stamps remaining are dated 1943. As for the Mk VI, I wish that stamp was just a little more legible. It's difficult to say if it's a date or the maker's initials.

The GSW factories must have been humming during the war!
sjsmith1914