For your viewing pleasure I present to you a pair of medals earned by Private Douglas L Woods. (Note: On his South African enlistment documents his name is spelt as Dugless, I do not know what the proper spelling is yet so until I learn later I will spell his name as the more common Douglas.)

A quick check of the medal roll for this QSA is annotated as having been “Presented by HRH”. This may explain why the bars have not been attached to the medal as they were later sent out to some recipients who had there medals presented by the HRH on his tour of Canada in 1902.

I don’t know much about his Early life yet but I do know that Douglas Woods was born in 1861 at Halifax Nova Scotia.

The Northwest Rebellion was a result of growing animosity between the aboriginal peoples of Canada’s Northwest Territory (including the Metis) and the Federal Government of Canada. The culture of the Plains tribes had been facing eradication since the late 1870’s with the near extinction of the plains bison. Many of the tribes could no longer sustain themselves in the way they had previous to this and with the spread of civilization creeping westward felt the figurative noose tightening. For the Metis the animosity had been worsening since the Red River Rebellion of 1870 with no sign of improvement. As a result on March 19th of 1885 the Metis formed a provisional government at Batoche and demanded surrender of the nearby Hudson Bay Company post at Fort Carlton.

Word quickly spread to Ottawa of the uprising and on March 25th the government ordered the mobilization of Canada’s militia to deal with this threat. Troops were to be deployed to the Northwest by the Canadian Pacific Railway company. Gaps in the railways however still existed which meant wagon trails were necessary in certain areas as well. By the end of April over 3,000 troops had been transported west to see service.

The Halifax Provisional Battalion was formed in Nova Scotia and was commanded by Lieutenant-Colonel James J. Bremner. Consisting of roughly 350 soldiers and it was made up of three companies from the Princess Louise Fusiliers (66th rifles), three companies of the 63rd Halifax Rifles, and two companies of the 1st "Halifax" Brigade of Garrison Artillery, with 32 officers. The battalion left Halifax under orders for the North-West on Saturday, 11 April 1885.

The Battalion was assigned garrison duty along the CPR main line that stretched across the prairies. After a short stay in Winnipeg, the Battalion was separated into four groups and sent to Moose Jaw, Swift Current, Saskatchewan Landing, and Medicine Hat. Soldiers had to remain vigilant due to the possibility of raids on their positions.

The men of the 63rd contingent served primarily at Swift Current, and Saskatchewan landing with one company staying at Moose Jaw.

The battalion reformed in its entirety at Moose Jaw following the cessation of hostilities on July 2nd. The battalion proceeded first to Winnipeg and finally arrived back home in Halifax on July 24th.

For his part in the campaign Douglas L Woods was awarded the Northwest Canada campaign medal. It was presented to him on May 24th 1886 on the Grand Parade by General Lord Russel.

Following the Rebellion Douglas remained in Halifax he married and had two children. He gained employment as a Tinsmith and stayed active with the local militia regiment.
(from the Canadian war museum)

On October 3 1899, with war imminent, the British government suggested that Canada provide several 125-man units for service in South Africa.

The Canadian government sought to assure a strong Canadian identity for the contingent offering a single "regiment of infantry, 1,000 strong." Great Britain agreed to this arrangement later in October and soon 1,019 officers and men, were made into the 2nd (Special Service) Battalion, Royal Canadian Regiment of Infantry. Members of the Permanent Force made up about fifteen percent of the total strength of the unit, included the commanding officer, Lieutenant-Colonel William Dillon Otter.

When the battalion arrived in South Africa on 29 November 1899, after an uncomfortable month-long sea voyage, it was still a fighting unit in name only. Lieutenant-Colonel Otter estimated that a third of the battalion was without prior military service, and half the men were no better than recruits. The battalion was able to train during the two months it spent on lines-of-communications duties after it arrived in South Africa. During this period there were a few opportunities to see action, including the assault on Sunnyside kopje on 1 January 1900, in which C Company, and the machine gun section, participated alongside British and Australian troops.

On 12 February 1900, the battalion joined the 19th Brigade to march and fight in the great British offensive aimed at capturing Pretoria, the capital of the Transvaal. The Royal Canadians (as 2 RCRI was often referred to at the time) were soon in action at Paardeberg Drift, suffering heavy casualties on 18 February, and mounting the famous attack that led to the surrender of General Cronje's Boer forces on the 27th. Paardeberg was the first major British victory of the war.

After Paardeberg the battalion fought in the British advance on the Boer capitals of Bloemfontein and Pretoria, gaining in experience and reputation all the while. By the time 2 RCRI marched past Lord Roberts in Pretoria on 5 June 1900, it was considered by many observers as good as any battalion in the British Army. Unfortunately, Canadian arrangements to replace losses from battle and disease were totally inadequate and by this time the battalion was at less than half strength. With the Transvaal capital in British hands, and the war seemingly won, the RCRI took up lines-of-communications duties once again. The unit spent the rest of its tour of operations on this assignment, except for an interlude spent with a column of infantry chasing mounted Boer forces.

Douglas woods enlisted into 2 RCRI on October 24th at Halifax and served in South Africa until he was invalided to England on the 13th of August 1900. He received his discharge in England on August 31st and returned home to Halifax. For his service in South Africa he was awarded the Queens South Africa medal with bars for Paardeberg and Cape Colony.

Following his return to Halifax Douglas took up employment as a clerk and added a third child to his brood.

Douglas L Woods passed away in 1931 and is interred at Mount Olivet Cemetery Halifax Nova Scotia. He was the last surviving member of the regiment who served in NorthWest Canada 1885. 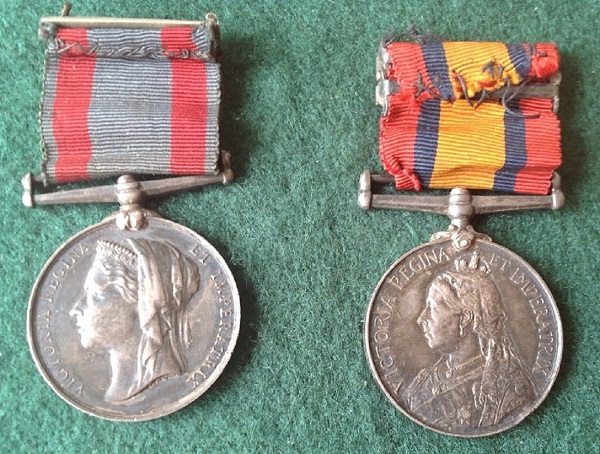 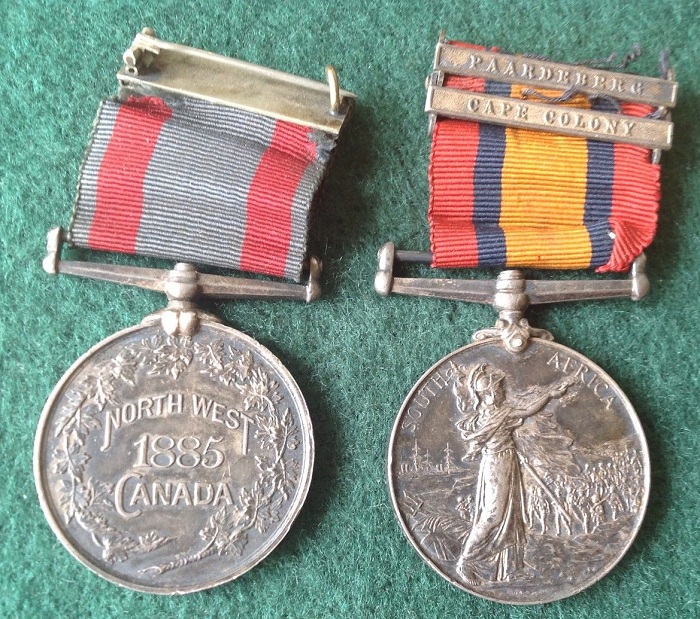 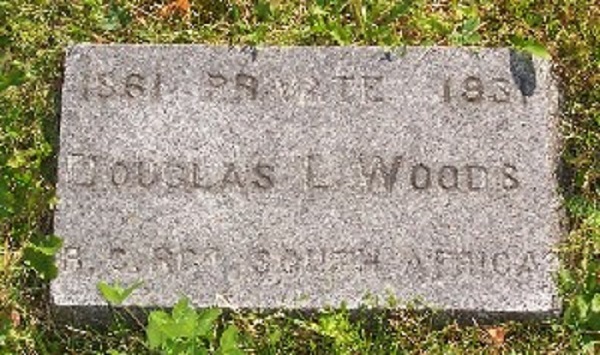 I have a distinct like of these earlier medals for service on Canadians etc. Thank god I have resisted adding any to my collection. I lack enough focus right now. Please keep posting things like this so I can stay my course.
_________________
Cliff