Picked these up today. Photo was taken in Halifax probably before they sailed to South Africa. Tablets are interesting since they are Canadian made.

[You must be registered and logged in to see this image.]
edstorey 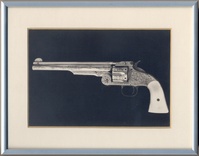 The revolver he is holding looks like a Colt DA Model 1878 New Frontier in 45 cal. One thousand and one of these were purchased by the Canadian Govt for the troops that fought in the North West Rebellion. Some were used by the troops that went to the Boer War. I believe these revolvers were also used by the Yukon Field Force during the Klondyke Gold Rush in 1898.
Tankermike

Anthony, did the LDSH wear only Strathcona boots exclusively while overseas?

From the known photos of the SH in the Boer War , going over, on operations, returning , most all had Strathcona's "high browns", which made then stand out.

Not saying it never happened, but I have yet to see a confirmed photo of members wearing putties.

Thus, thinking that the photo would be CMR, which also departed from Halifax.