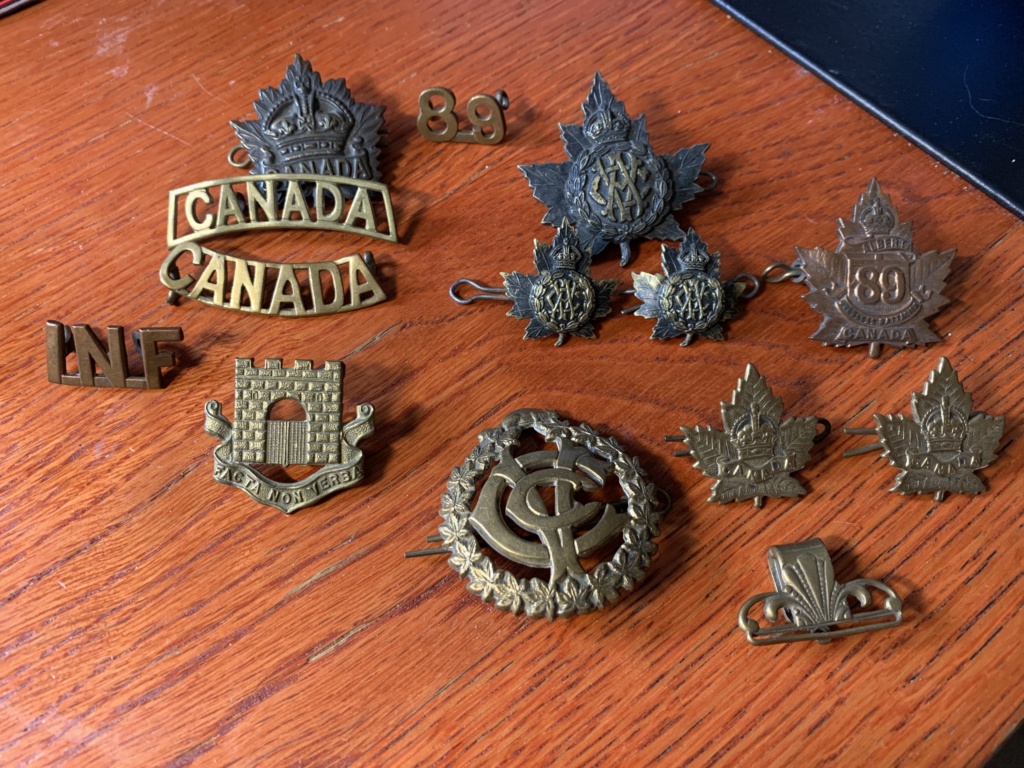 Going through my dad's effects I found these in a bag. I believe they are a great grandfather's from the 89th Battalion (Alberta), CEF. Pretty obvious in one way but there are others that I don't know if they are all part of his uniform. Any help identifying would be greatly appreciated.
Bill

Hi Steve, nice lot of badges. The 89th are self explanatory. The maple leaf badges with the cypher are for the Canadian Army Veterinary Corps, cap badge and collars. The round badge with the CVC cypher is a variation of the Canadian Army Veterinary Corps cap badge. Facta non Verba is a Fort Garry Horse cap or collar.The maple leaf badges with Canada are general list badges, eg represent the army but no specific unit. The small metal hanger bottom right corner is not military.

Much appreciated as this is my genealogy project thus I'm not that familiar with navigating all the sources available for military information. But this opens up a whole new can of beans. I see in other messages that records are available for WWI soldiers. How would I find my great grandfather Charles Thomas Hoy born about 1874? Come to think of it, not many men of 41 years old would have enlisted. Makes more sense if he was a veterinarian though.

The small metal clip I believe is a tie clip isn't it?

Wikipedia describes the 89th as what appears to me to be an enlistment brigade being absorbed rather quickly into the reserve unit:
The 89th Battalion (Alberta), CEF, was an infantry battalion of the Great War Canadian Expeditionary Force. The 89th Battalion was authorized on 22 December 1915 and embarked for Britain on 2 June 1916, where its personnel were absorbed by the 9th Reserve Battalion, CEF, to provide reinforcements for the Canadian Corps in the field. The battalion disbanded on 21 May 1917.

So if a man joined the 89th as a veterinarian do you think they would have sent him to Fort Garry for training? This is the Fort Garry in Manitoba right?
Bill

Hello Steve, Here is a link to his service file. He did enlist with the 89th and later transferred to the CAVC. Service File

How did you ever access this file? It's fantastic! 50 pages - wow!!
Bill

Many many thanks for your help. I'll try to navigate it myself now!
Rick88Golf

Inherited badges in the pic. I don’t collect so any interest?
Bill

Hi Rick
sorry, which badges did you inherit? The badges at the top of this thread?
Rick88Golf 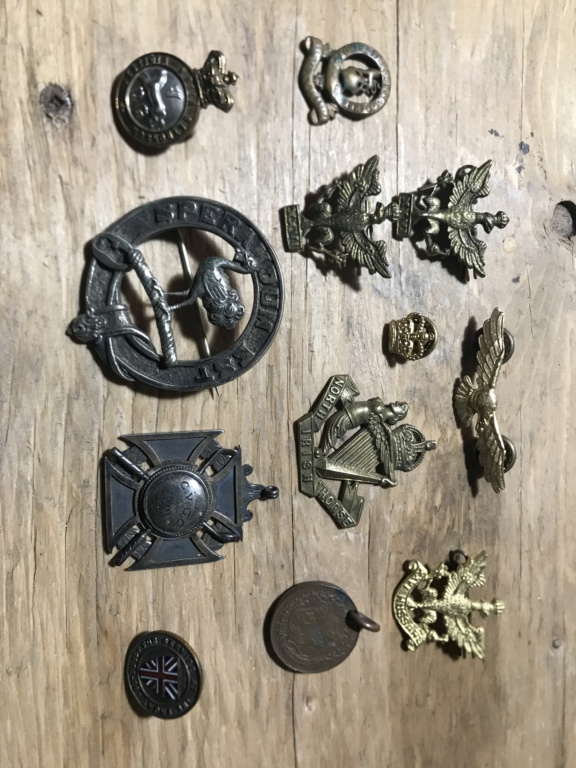 Bill wrote:Hi Rick
sorry, which badges did you inherit? The badges at the top of this thread?

That is correct. I now have his complete service record which revealed which badges were which and in what order.
Sponsored content