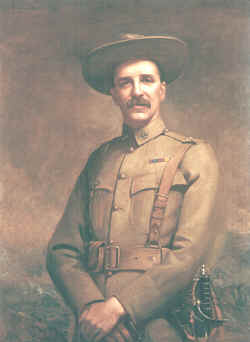 An American by birth, and an officer in the Connecticut National Guard, Howard was sent north by the Colt Firearms Company to operate a Gatling gun that the company had loaned to the Canadian Militia for use in the Northwest Campaign of 1885.

A colourful and charismatic character, he soon became something of a hero of that campaign, and was given his nickname "Gat" by the popular press. He stayed in Canada, and became quite wealthy as a major shareholder in the Dominion Cartridge Factory.

Howard offered to provide a battery of four machine guns at his own expense for service in the South African War. The Department of Militia and Defence refused his offer, although Howard accepted the position of machine gun officer in the 1st Canadian Mounted Rifles (later called the Royal Canadian Dragoons).
Battalion Colours

For those of you interested in learning more about the Canadian Scouts:

This book tells the story of the Canadian Scouts, a small, well-armed, aggressive unit of scouts formed in South Africa in1900 by a group of Canadians who had finished their tours with other units. It was not an official Canadian unit but a mounted irregular force raised in South Africa by the British. As time went on it had many members from Australia, New Zealand, the United States and Britain. The original members imbued the unit with a bit of a Òwild westÓ attitude and the Scouts fostered this swashbuckling image. Unlike some other units they made no attempt to emulate Imperial units and eschewed British Army spit and polish and parade ground discipline. Rumours of unorthodox behaviour ran rife throughout the unitÕs short eighteen-month life, leaving the story of the Canadian Scouts surrounded by myths, some founded in fact and others the product of an active imagination. Nobody questioned the ScoutsÕ ability to fight and any general would have been thankful to have them under his command in wartime. The book is based on official records, newspaper reports, personal reminiscences and letters. To the extent possible the story is told in the words of those taking part. The book contains lists of casualties and honours and awards as well as a complete combination nominal roll and medal roll. There are a number of maps and photographs.
Battalion Colours

Forum member qsamike did a review of KNOWING NO FEAR on the Victorian Wars Forum and I thought I would post it here:

"The Scouts regarded themselves as fighters not "tin soldiers".

The Canadian Scouts represent a unique period in British military history when irregular units were recruited to augment the regular forces available for the campaign in South Africa. Many of the irregular units were largely made up of "Colonials" from Australia, Canada, New Zealand and Cape Colony, providing an opportunity for the so-called "Colonials" do demonstrate their prowess in guerilla warfare in which they were often deployed as scouts.

This book is the definitive history of the 1003 men who served in the Canadian Scouts from their formation to their disbandment. The youngest members of the scouts were Sergeant Walter Bapty and Trooper Stanley Rankin, both who were 16 when they enlisted to the Commanding Officer Major Howard at 55. Table One lists all the 16 countries represented and quantifies that were represented in the Scouts. There is a full casualty list, listing of the Coronation Contingent, Honours and Awards, and of course a Nominal and Medal Roll.

SOME FAMOUS MEMBERS OF CANADIAN SCOUTS WHO WENT ON TO GREATER THINGS:

The Medal Roll consist of the following information:

This shows that 32323 Corporal Albert Digger, an Australian, served in the Canadian Scouts from January 23rd, 1901 to May 1902. He also served in the Queensland Imperial Bushmen and Kitchener’s Fighting Scouts. He was entitled to the Queen’s South Africa Medal with bars Cape Colony, Orange Free State, Transvaal, South Africa 1901 and South Africa 1902. He was also a member of the Coronation Contingent.

I have a number of copies of this book for sale as I have been distributing them for the author......

"The unit designation is somewhat misleading because later on it was not a strictly Canadian unit. Over one hundred Australians served in the Canadian Scouts."

The unit war originally designed to be made up only of Canadians who stayed behind after their time had expired..... But there was not enough they accepted anyone..... Even Australians..... LOL..... The original unit's name was HOWARD'S SCOUTS but after the murder of Howard the men decided to change their name to Canadian Scouts in his honour.....

There is another good book (of fiction) that has been published within the last year by a Canadian author called THE GREAT KAROO, I can recommend it as a good story......

How much are copies and can we order direct from you?

Yes you can order direct from me..... They are $29.95 Canadian per copy and postage (Whive will vary) depending on number of copies and location......

i am just know about the.....
Canada has several museums focused on Scouting and Guiding..

Canada has several museums focused on Scouting and Guiding

Hi boardalan, I think there is some confusion about the term "scout". In the thread, "scout" refers to a military task while the references you listed are a reference to the youth organization.
Baden Powell organized the Boy Scouts in response to his Boer War experiences, and the early Scouts reflected many military themes, but they are not the same thing.
qsamike

I was hoing to basically say the same as Bill....