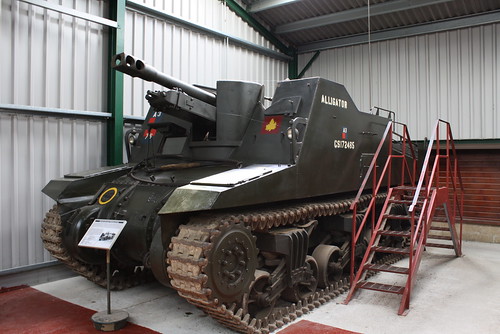 The 25pdr SP, tracked, Sexton[2] was a self-propelled artillery vehicle of World War II, based on an American tank hull design, built by Canada for the British Army, and associated Commonwealth forces, and some of the other Allies.

It was developed to give the British Army a mobile artillery gun using their Ordnance QF 25 pounder gun-howitzer. From 1943 it replaced US built self-propelled guns (US 105 mm guns on a M3 Lee tank chassis); these had replaced the British Bishop (25 pdr on Valentine tank chassis) which had been a temporary solution in 1942.

In 1942, the US supplied enough M7 Priest self-propelled howitzers to equip a number of British Army artillery units in fighting in North Africa. The British found the Priest to be an excellent weapon, which gave artillery the same mobility as tank units. However, the Priest used the American 105 mm howitzer rather than the British equivalent, the QF 25 pounder gun-howitzer. Having to supply different ammunition for a few units caused logistical problems for the British Army. The US attempted to fit a 25 pounder to the M7 Priest but the program suffered delays including the destruction of the gun mount on the prototype during the first live-firing exercises.

Meanwhile, the Army Engineering Design Branch of the Canadian government's Department of Munitions and Supply had set about designing a self-propelled version of the 25 Pounder gun. A prototype of the vehicle, which was based on the Ram tank (itself a Canadian adaptation of the American Medium Tank M3, or M3 Lee), was completed on 23 June 1942. Following trials in Canada, the Canadian government ordered 124 vehicles in three batches. The prototype was shipped to the United Kingdom, where it underwent further trials; the vehicle was found to be highly satisfactory, and was given the designation "Sexton" in May of 1943. The British government ordered 300 Sextons in the summer of 1943; however, these Sextons were to be built on Grizzly tank hulls (Canadian-built M4A1 Sherman tanks) instead of Ram tank hulls. The Ram-based Sexton was designated as the Sexton Mark I and the Grizzly-based Sexton was designated the Sexton Mark II. British orders for the Sexton II eventually totalled 2,026 vehicles.

Between 1943 and 1945, the Montreal Locomotive Works manufactured a total of 2,150 Sextons for the use of both Canadian and British forces. The vehicle entered service in September 1943. The vehicles were first used in combat in Italy by the 8th Army.. Latter Sextons took an active part in the invasion of France and subsequent Battle of Normandy and the campaign in north-western Europe. During the D-day landings a number of Sextons were ordered to fire from their landing craft as they approached the beaches although the fire did not prove to be very accurate.. In spite of its confused origins, the Sexton was a combination of proven parts and proved to be a successful design and remained in British service until 1956.

Unlike Germany, which often used its self-propelled guns in a front line direct fire role, Britain and Canada only used the Sexton for indirect supporting fire. They kept the Sextons well back from the front line and used forward observers to direct overwhelming fire on a target.
Seaforth Highlander

In October 1985 I did the appraisal for Dr. Bill Gregg's collection of about 30 vehicles plus lots of other stuff including a WWI German 77mm field gun. As part of the process I rode in the Grizzly tank, Stuart tank and Sexton self proelled gun.

The Sexton has a rotary engine and it is grunt work to start it. Due to incompressible oil settling in the bottoms of the lowest engine cyclinders the crew have to hand crank the engine slowly to allow the oil to distribute itself throughout the engine. If one does not do this, the piston will hit the incompressible fluid and the cylinder head will likely become detached... so we had to hand crank that engine. I suppose that if one was shooting at you, you would have an adrenaline rush ...

That collection was offered to the Canadian War Museum but they turned it down. It went to the Royal Canadian Artillery Museum in CFB Shilo, Manitoba.