BWM and VM pair to a Canadian Draftee

BWM and VM pair to a Canadian Draftee

I was pretty stoked to get this simple pair to a local Ottawa lad. My first to an Ottawa fellow and my first Draftee. I thought the box, clearly NOT the box of issue, was nice as well, being from a local jewlery shop back in the day.

I do hope you take the time to read about Mr. Romeo St. Denis. Seems to me his life was cut way to short. Certainly I got the feeling he was destined for so much more in the furture.

St Denis, Romeo Pte 2008817
Service file reference: RG150 Accession 1992-93/166 Box 8593-20
War Service Badge Class “A” 230417
British War Medal and British Victory Medal were issued to him
Romeo St Denis was born in Ottawa, Ontario, Canada on 18 September 1897, to Arthur and Obeline St Denis. He is the 3rd eldest in a family of 12 children. He has 7 sisters and 4 brothers.  One brother and one sisters are elder than he.
He was drafted under Military Service Act of 1917 on 01 May 1918 in Ottawa Ontario, as a ‘Class One recruit’ A Class One Recruit  is as follows:  Those who have attained the age of twenty years and were born not earlier than the year 1883 and are unmarried, or are widowers but have no child.

He was assigned to 3. M.D. Engineer Depot
Note: on Papers has signed his name, J. Romeo St Denis
Marital status as single, residing with his mother and father at 425 Clarence St Ottawa Ontario.
Gave his trade or calling as Moulder
He stated his religious affiliation as Roman Catholic. This is confirmed in his associations. He was a member of the Knights of Columbus, the Catholic Order of Foresters, and the St. Joseph Union.

Physically described as 5’5” in height, weighing 135 lbs, with a ruddy complexion, light brown hair and blue eyes.
Romeo embarked from the Port of Montreal on 27 June 1918; aboard the Cunard Lines ship official number 129524 Valacia, passing through the Port of Halifax, arriving in Liverpool England on 15 July 1918
His movements overseas are as follows:
Romeo was Taken on Strength to 2nd CERD (Canadian Engineer Reinforcement Depot)  upon arrival at Seaford England.
Struck off Strength 2nd CERD as transferred to the Canadian Engineer Pool 10 October 1918
Officially Taken on Strength Canadian Engineer Reinforcement Pool in the French Theatre 12 October 1918
Joined from Base 16 October 1918
Transferred to the 9th Bn Canadian Engineers 25 October 1918, he joined his new unit 4 days later on 29 October 1918, According to the 9th Battalion diary, Romeo as one member of the 73 Other Ranks that joined the Battalions ranks that day.
Proceeded to England after the war’s end on 16 February 1919
Embarked for Canada aboard the S.S. Olympic form Southampton on 17 March 1919
Romeo was officially discharged from the Canadian Expeditionary Force at No 3 District Depot Dispersal Area Station “G” Ottawa Ontario on 28 March 1919.

At some date after his return to civilian life in Ottawa, he became proprietor and manager of Capital Brass Works; this fact was confirmed in the Ottawa City Directory of 1923. The address for his business in directory is noted at 207 Booth Street Ottawa, however sometime prior to his death in February 1928, the business relocated to

Romeo Died at Ottawa Civic Hospital 07 February 1928 as a result of injuries received after being struck at a Railroad crossing while driving an automobile.
He was buried in Notre Dame Cemetery Ottawa Ontario 10 February 1928


The following information has been transcribed from the front page news headline surrounding the accident that took his life:
Headline: OTTAWA MAN IS STRUCK BY TRAIN AT CROSSING.
Sub line: Auto Carried for 500 feet on Rail Track
Romeo J. St. Denis, 425Clarence Street, Critically injured in smash at Parkdale Ave. crossing
SLIM HOPES ARE HELD FOR HIS RECOVERY
Eye-witness Thinks He Was Trying To Get Across Track Ahead of Oncoming Train.
Mr. Romeo J. St. Denis, 425 Clarence Street, manager and part owner of THE Capital Brass Works, 530 Parkdale Avenue, was critically injured about 11:30 o’clock this morning when a combined truck and roadster Chevrolet car which he was driving was struck by the incoming C.N.R. Pembroke train at the Parkdale avenue level crossing.
When the locomotive, travelling at about twenty-five miles an hour, struck the automobile it was carried fully six hundred feet along the track before the engine was brought to a stop.
The train crew found Mr. St. Denis on the pilot of the engine, covered with debris of the wrecked car, and he was carried on board the train and given first aid by Dr. M.J. Mahoney, M.P., of Eganville, who was a passenger on the train, and was brought to the Central Station.
There he was placed in Hulse Bros. Ambulance and rushed to the Civic Hospital, where Drs. F. W. McKinnon and W.C. McCarthy, who are in attendance, hold out but slim hopes for his recovery.
Last Rites of Church.
When picked up, Mr. St. Denis was in an unconscious condition and at the hospital he was found to have sustained a compound fracture of the right leg, a bad scalp wound, and is believed to be suffering from internal haemorrhaging. So serious was his condition that the last rites of the church were administered to him.
How the accident happened is not quite clear, but the engineer of the train, Mr. Harry Brown, 19 Keho Drive, stated that when they were some distance from the crossing, where the wigwag signal was operating, and while the locomotive bell was sounding his warning, his fireman, Mr. D. Milligan, shouted to him that an auto was approaching the crossing from the north side. He applied the brakes, but too late to avoid hitting the automobile, which was squarely on the tracks when the engine arrived at the crossing, and which was carried some distance before the train was brought to a stop.
(Continued on Page 3 column 5)
AUTO CARRIED FOR 500 FEET ON RAIL TRACK
(Continued from Page One)
Story of Eye-Witness.
Mr. St. Denis was travelling south in his car en route to the Capital Brass Works, which are located about sixty feet south of the C.N.R. tracks, and according to a teamster, Mr. R.H. Kelly, Grant Street, whom Mr. St. Denis had passed, travelling at a fair rate of speed, the driver of the car was apparently trying to get across the tracks before the train arrived. He does not think the car stalled in any way.
How Mr. St. Denis escaped instant death in view of the wreck of his car which was smashed almost to kindling wood, is a wonder to the railway authorities, as is also the fact that his unconscious body was found on the pilot of the engine.
It is surmised that when Mr. St. Denis ewoke to his danger, and saw the oncoming locomotive upon him, he must have tried to jump from his car and landed on the pilot of the engine, as there was no trace of blood on the wreckage of his auto, when examined afterwards.
Fireman Milligan, of the C.N.R., stated that when he saw the automobile it was on the south side of the tracks and was traveling fast for the crossing apparently in an endeavour to get across before the train arrived, and he shouted a warning to his engineer who at once applied the emergency brakes, but he was too late to avoid the accident.
He said the engineer had whistled for the crossing and that the bell was ringing as they approached it.
The conductor in charge of the train was Mr. J. Marsh, 65 Aylmer Avenue, and he assisted in carrying the badly injured man onto the train, and with Dr. J.M. Maloney, M.P., rendered what first aid was possible.
Mr. J. Robinson, partner of Mr. St. Denis in the Capital Brass Works, stated he was at a loss to explain how the accident occurred, as there is a clear view of the approaching trains at the Parkdale Avenue crossing, and Mr. St. Denis had been traveling this route for some years and knew the times at which trains could be expected.
He stated that after the locomotive hit the Chevrolet, it was carried in a mass of splintered wreckage fully five hundred feet down the track, before the train came to a standstill. 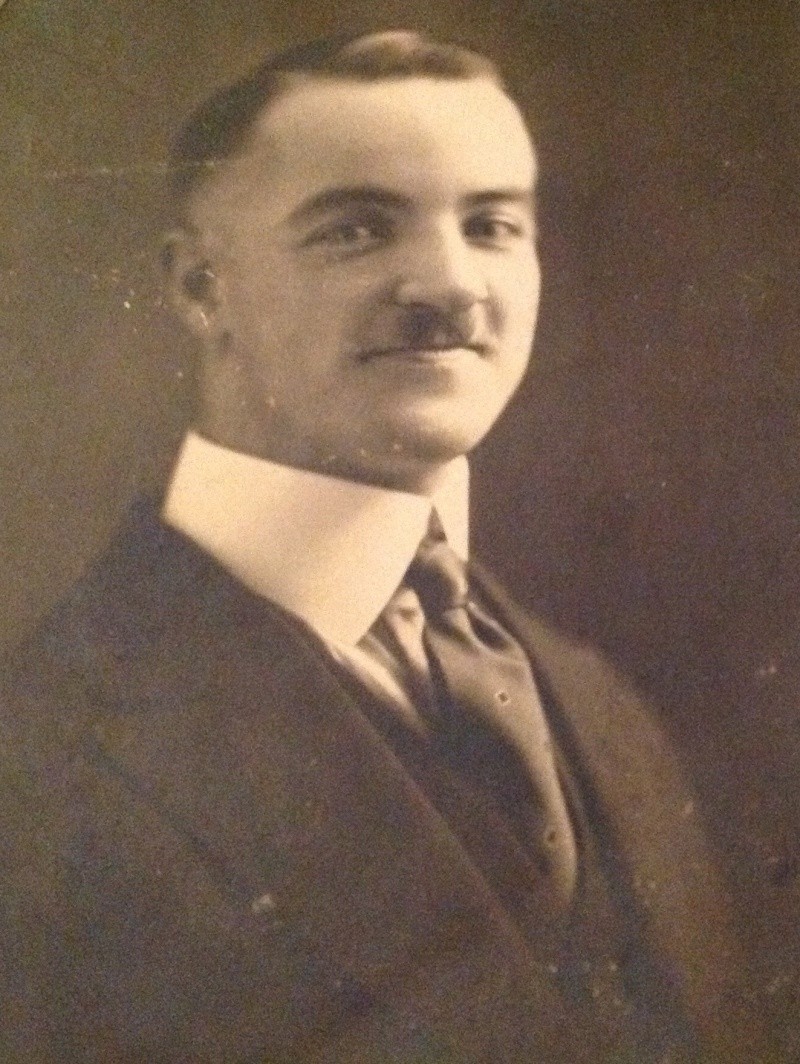 Nice pair of medals there. I love getting simple pairs and trios (within theme) as they have a story too.

I find this interesting:

I have a few late arrival fellows and they usually spent time in the Occupation forces before getting back to the UK and Canada. One was in the relocation of our dead and others were battlefield recovery. Just that there's usually something good there.

Mind you, his being hit by a train is a gooder too.

Hey Darrell, I found his life outside the CEF much more interesing than his life with in the service. I also found it quite interesting that his time in theatre post war was alomst three times that of his service during the war.

I do wish his service file had more details in it. I have started to go through the 9th Bn Canadian Engineers war diraies to see if there was anything interesting going on. To date, nothing has sprung up at me.

I have only just returned to collecting medals and have desided to try to stay within the broad field of Canadian pairs and trios, primarily pairs.
_________________
Cliff