You are not connected. Please login or register
+2
davecamp
mooseman
6 posters

Hi to all and please forgive me if this has been posted elsewhere but I can't find it if it has. My grandfather attested 76th Bat. Welland and Lincoln in July 1915. He arrived in England in May of 1916, was shipped to France in August of '16 and wounded in May 1917 at Arras. After recovery he spent the rest of the war boxing for the entertainment of the troops.

He passed away in 1965. He marched in every Veteran's day parade I can remember and I can still see him in his legion uniform. I have asked the family if anyone recollects what medals he had but haven't had any luck finding them.

Two questions then for this group. Is there a relatively easy way to find out what medals he was awarded and how and where would I go to get replicas?

I have his service records. "No decorations" listed on his discharge page.

Assuming the person you are researching was a Canadian serviceman you can contact VAC in Ottawa, quoting the name and regimental # of the person. I have recently successfully obtained records for my great uncle via this route.

I believe that you may be able to get this info using name, date of birth, etc if you cannot provide the regimental #, but I am not totally sure of this

To add to Dave's reply, in the documents there should be a medal index card which lists the medals he was entitled to. Most CEF service earned two medals, the Victory Medal and the British War Medal 1914-1919. These were impressed with the recipient's service number, rank, name and unit on the edge. (For other ranks, officers had fewer details.)The 76th Bn was broke up for reinforcements in the UK, so you grandfather served with another battalion at the front. This will be indicated on the service file.

It is possible that his medals are in the hands of a collector, and it may be worth advertising that you are looking for them.
mooseman

Thanks to Dave and Bill.

Chris was moved from the 76th to the 1st Bat. (44th regiment) I have his records and regimental number but can't find anything in the documents about medals. I will check with VAC,

I am quite sure the medals are still with someone in the family. I have received some wonderful keepsakes from my grandfather and don't covet the medals. I would like to know which ones he was given so I might add that information to a small book I am writing about his service. Would he have been provided with a medal for his injuries on the front?

Injuries would lead to him receiving a wound stripe, which could be worn on the left sleeve of the uniform.
mooseman

Thanks so much for your help
pylon1357

The MIC or Medals index card for a Canadian Soldier in World War One, is different in appearence to the British counterpart. The card is made of cardstock, and measures about 3 by 5 inches.

Attached is a MIC for one 'my' men.

Note the "B" on the right margin, with a stoke through it, also note the "V" under that. The "B" indicates British War Medal, the "V" indicates Victory Medal.

Thanks for this. I found the photo copy of this document in his war records. I would never have found it without this. Same two medals as your man.
pylon1357

mooseman wrote:Thanks for this. I found the photo copy of this document in his war records. I would never have found it without this. Same two medals as your man. 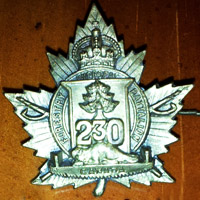 I am a US militaria collector. Canadian militaria is uncharted waters for me. My 2x great grandfather served in the 230th Forestry Battalion from '17-'18. I've been slowly trying to gather items together as anything he was awarded/wore is long since lost from the family. I managed to acquire examples of collar and cap devices and wanted to gather a few other pieces for a display to honour him.

I am interested in this thread for the obvious reason. I have my ancestor's records and have had difficulty with terminology and understanding what he might have done in service. I do know that he never made it to France, serving instead in England (as is noted on his MIC below). What I can't make heads nor tales of is his medals he might have been awarded.

Any insight would truly be appreciated! 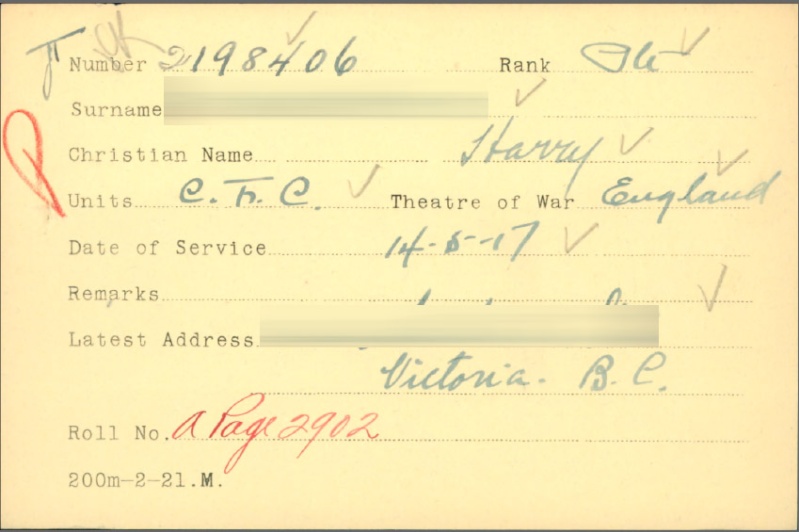 I am considering purchasing some replica miniature medals for the display once I can sort out what (if any) medals were given to him.

Hello and welcome 67Rally It would appear to me he received the British War Medal only.

There were 7 Theaters of War for WWI and they are as follows;


I have simplified the above information, the actual qualification area is quite complicated in regards to the VM.
_________________
Cliff

Thanks for those details, pylon1357! I would have assumed that the VM was the one he earned with my thinking of how the US distributed the WW VM. Thanks for the clarification!
Sponsored content