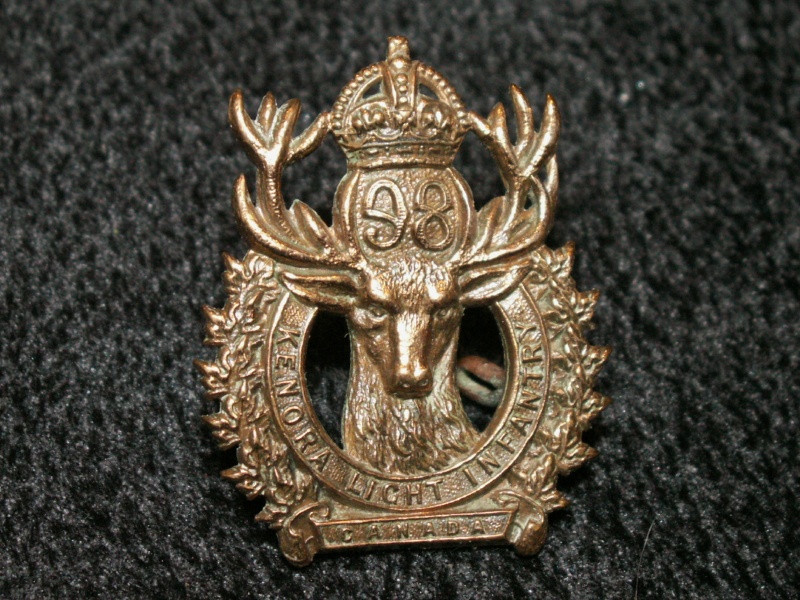 Is this badge is struck from light guage metal Dale?
mk1rceme 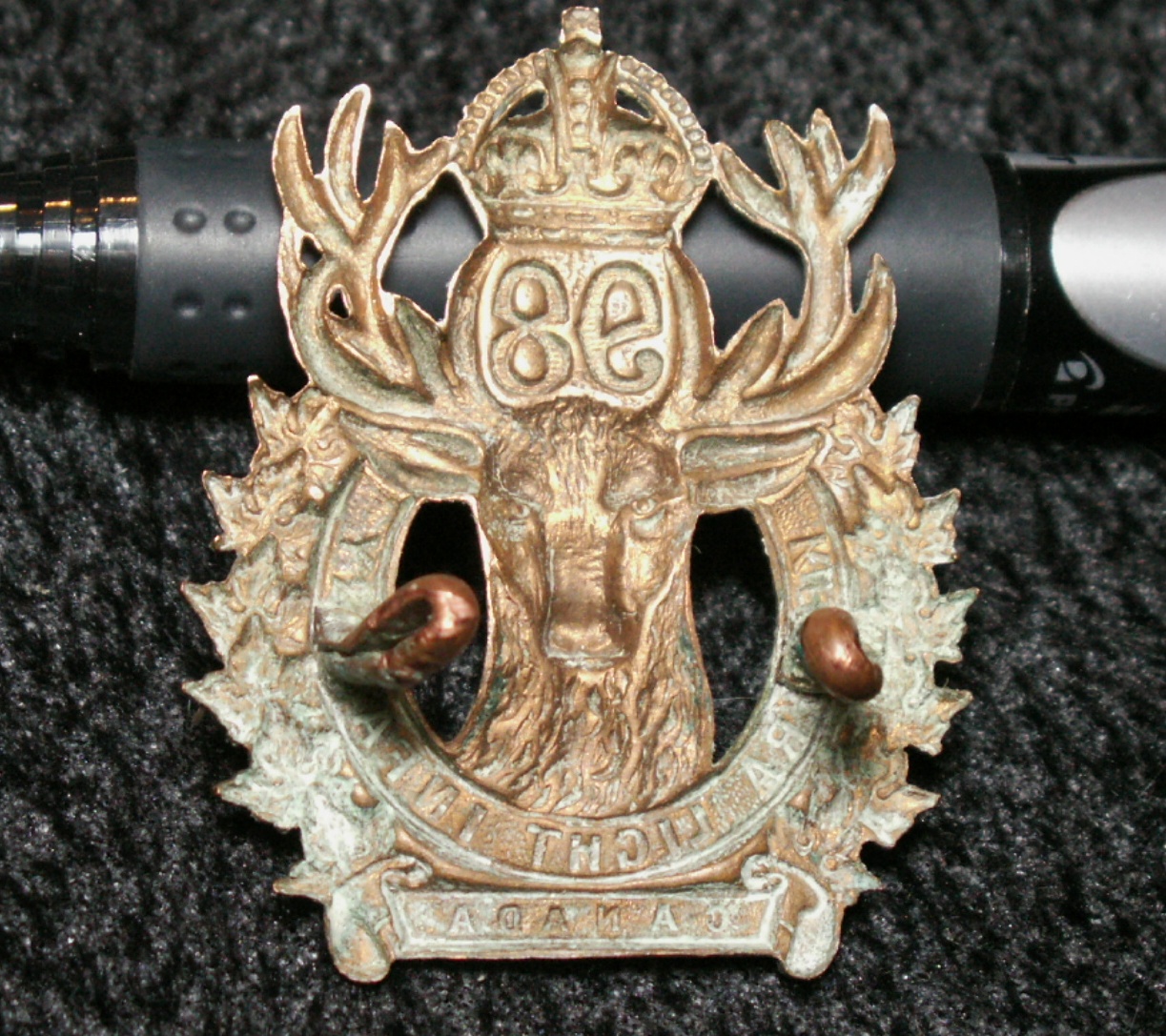 Cap and collar badges are the same size for the 98 Kenora LI.
CoolPoolNorm

New to here and thought I might be able to pick someone's brain for some information, and luckily I found this thread!

I only recently found out that my grandfather had been in the 98th Bn (Kenora Light Infantry) before the war, although I knew he'd served with the 10th during the war, and was wounded in Sept 1918 at Cambrai.
I've got a beautiful picture of him in Uniform - I believe circa 1909 when he was in the 98th, and I'd love to get a pre-War cap badge and collar dogs for his display.

The detail that makes me believe that the pic is prewar is his collar dogs - they're maple leafs, but I can't distinguish any more detail than that. I know the 10th had C/10 collar dogs (which the Calgary Highlanders still wear), and these are obviously different.

I've also found photos of 2 different cap badges for the 98th - one similar to the maple leaf collar dogs, and one withe the "98" and elk's head as posted above.
Which one is pre-war, and which one is post? Or am I wrong in assuming that the maple leaf one is a cap badge? Anyone have any info? 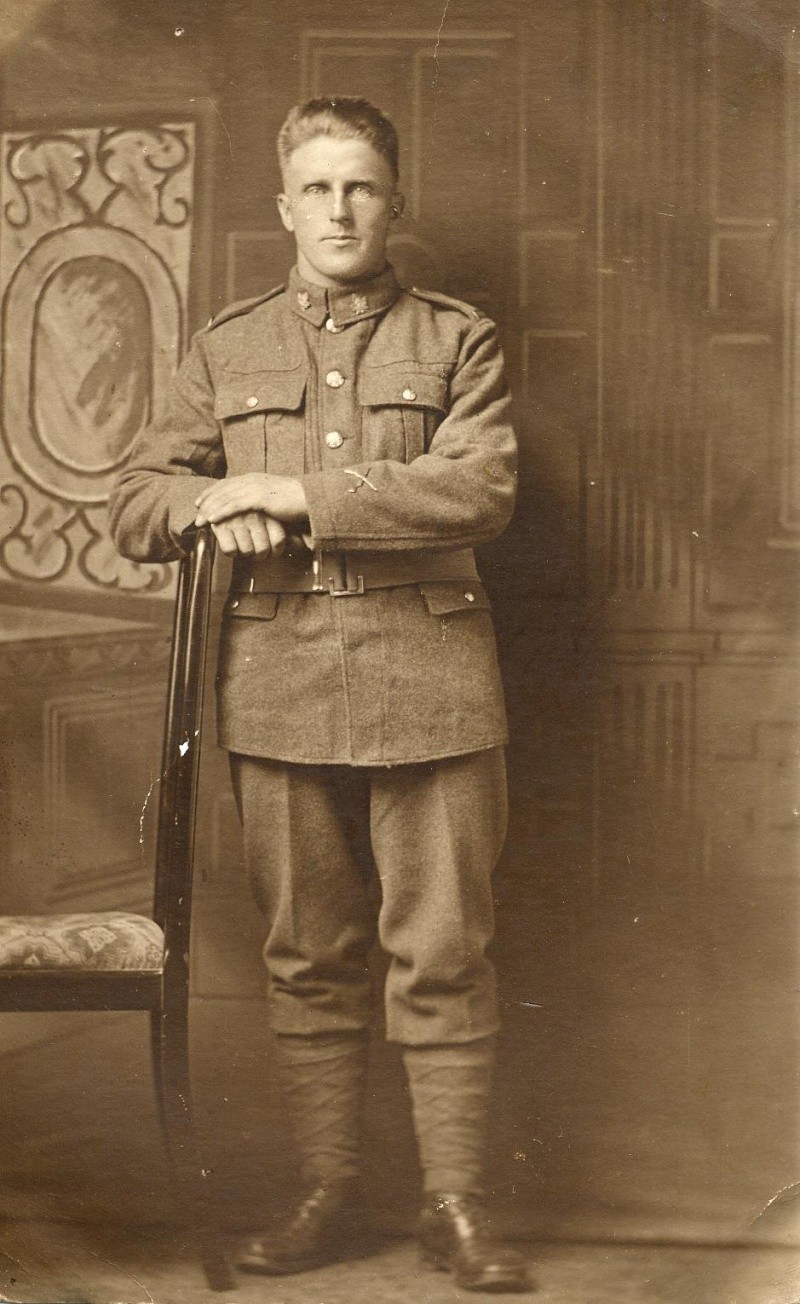 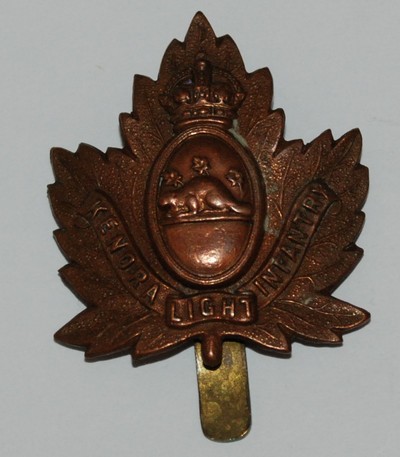 A very nice photograph although it was taken latter than 1909 as the 1908 Pattern Waistbelt and five-button SD Jacket dates it to either wartime or even post-WWI depending on his military service.
Bill

I think the same as Ed. The uniform and badges visible suggest a portrait taken during the First World War.
Addressing the badge questions, the 98th badge was the same size for caps and collars and was worn until the unit was re-organized as the Kenora Light Infantry in 1920. The badge shown is a cap badge as authorized 1922. They were fitted with sliders, while collars had lug fasteners.
I have two spare 98th badges if interested.
CoolPoolNorm

I have documents showing him living in Western Manitoba in Sept 1914, so that rules out the idea that he was still in the 98th at that point.... and when he enrolled in Jan 1918, he was living in Taber, AB, and he joined the 10th Btn.
That puts his service with the 98th between Jan 1908 (when he turned 18) at the earliest to mid-1914 at the latest.

I also have records showing he lived in High River AB in 1920, within months of his release (October 1919 - he was hospitalized in NB to treat his wounds) from the War.  That kind of rules out the uniform being post-war, as he'd also have his service medals, wound stripe and decorations on it, rather than just the rifleman's badge. After the war, he worked in the Turner Valley oilfields and also worked on DH4's for the CAF/RCAF at High River till he was hospitalized permanently in 1929. He passed away at the Col Belcher Hospital in Calgary in 1936.

Unfortunately, the collar dogs aren't so clear as to make out what they show very well, so I expect that they aren't the same as the cap badge pic I found. I just happened to find that on a google search for the 98th.
Would the pre-WW1 cap badge be the same as mk1rceme posted? Maybe they had different collar dogs than the cap badge.... it is relatively common, and possibly part of the inspiration for the post-War cap badge, and of course, Maple Leafs were a VERY popular symbol at the time.

And Bill - if it is Pre-War, I would be interested in it - just to add another piece to the puzzle of a grandfather I greatly admire, but unfortunately, never met.
edstorey

From the information provided, the photograph does not show his service with the 98th Bn, but when he was in the 10th Bn. You indicated he got overseas in 1918 before the war ended as you also mention a wound stripe; so given the five-button SD Jacket and 1908 Belt, the photograph was most likely taken in the UK prior to his heading over to France (hence no decorations or wound stripe). The badges could very well be GS Collars with CANADA titles.
CoolPoolNorm

Ed - THAT would definitely make sense as I was always told that this was a picture taken during WW1.... and he definitely doesn't look like he's still 19.

When I saw the (as I just found out) post war 98th collar badge, I guessed - obviously my guess was wrong

.... and now it all fits together. Properly, I hope!  So this pic would be dated 1918 -  probably while he was still either in Canada or England, and before being posted to the 10th.

Thanks for all the help!  This clears up a little piece of my family history.
Now if I could just find his records for when he was in the Air Force after the war.... LOL

The photograph was not taken in Canada because, as I have stated twice before, he is wearing clothing and equipment that was not issued in Canada. The photograph could only have been taken in the UK or perhaps France.
Bill

Hello Norm, I sent you a pm re the badge.
CoolPoolNorm

Thanks, Ed - I didn't realize that you'd meant it was a British-issued uniform, not a Canadian-issued one. I do know that they were different, but I don't know what the differences were.
Thanks for clearing it up for me!
Sponsored content