Hey guys,
Picked these up at a flea market this weekend. It was the first time I've seen a coloured toorie but having done some research it seems it is a period modification.
It was also interesting to see the liner removed from one tam, I have heard of this being period done before but never came across one.
I believe these both to be WWII period original tams but am open to discussion. Hopefully I've got the tartan correct for the HLI of C too lol 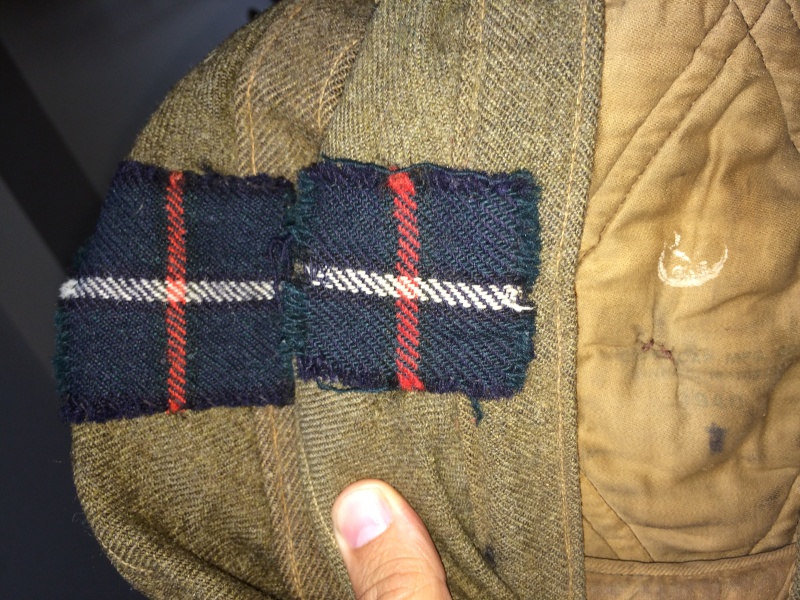 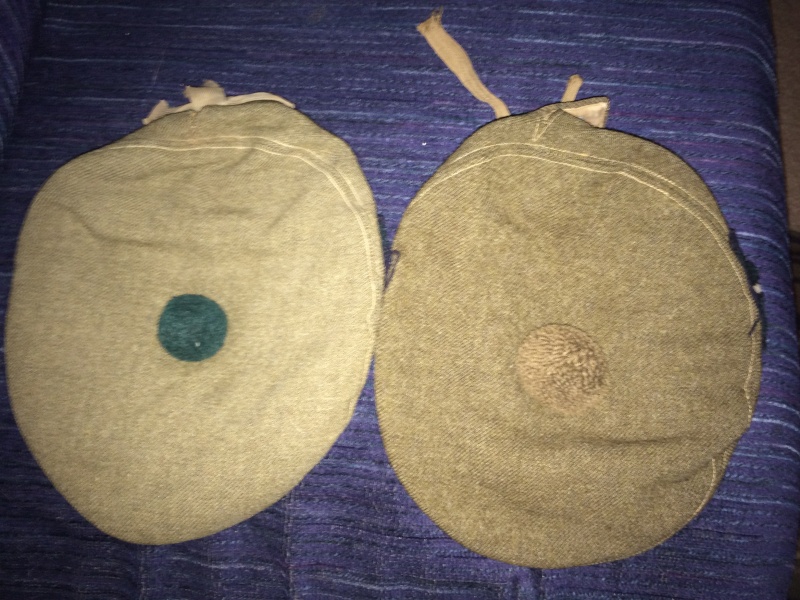 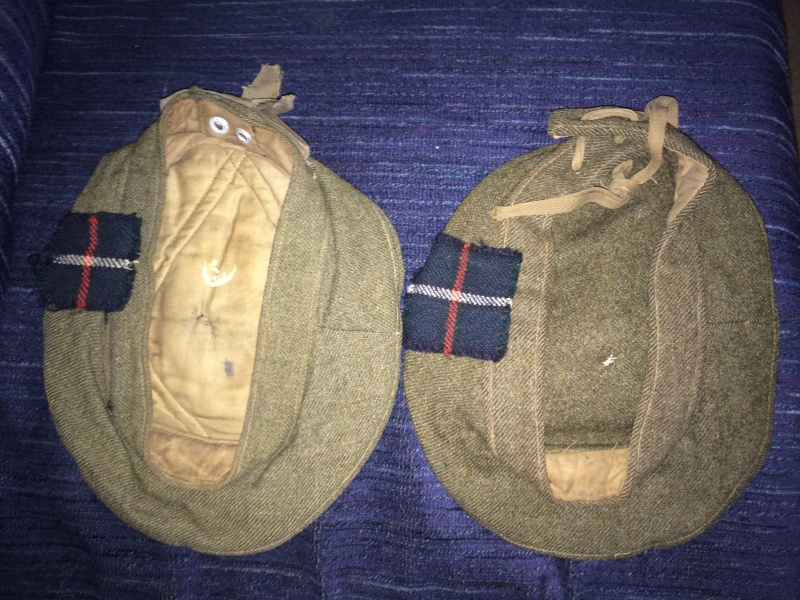 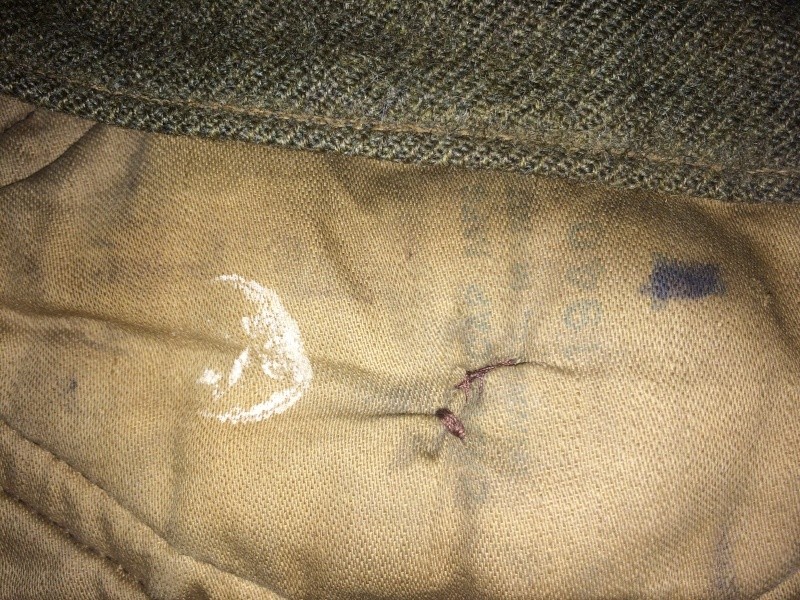 I have a few in my collection from different regiments that have the toorie removed for the regimental color as well as the corresponding tartan sewn directly under the cap badge.

I have also seen many WWII period pictures as well as veteran accounts that support this.

Those look like Seaforth Patches, Nice to see my reg but still strange that they're in Ontario of all places.
Bill

The Mackenzie tartan was worn by the Seaforth Highlanders of Canada, the Pictou Highlanders and the Highland Light Infantry of Canada. The tams look to be SWW.
pylon1357

LOL well I am looking at adding another Second World War Irish Regiment of Canada Officers badge to my collection in a few weeks. (but that don't count as it's Irish)
_________________
Cliff

Hi guys,
Thanks for the feedback! Bill, what reference are you using for Regimantal Tartan patterns?
While the Seaforths and Pictous wore the same tartan, these were picked up not far from the home of the HLI of C....chances are that is what they are but no way of knowing for sure unless I can nail down the fella whose name is written on the sweat band of the one. Bob Allen....I need to do some research!
_________________
Regards,
Jeff
Bill

The toorie colour will also indicate the regiment.
Bill

As a former collector of WW2 Canadian headwear, I can offer a bit of information that I was able to turn up over the years.

1. To the best of my knowledge, the HLI of C is the only Canadian Regiment who wore the dark green toorie. Michael Dorosh's book "Dressed to Kill" makes reference to the dark green toorie on the glengarry caps of the HLI of C, but does not mention the tams. However, I do remember finding ample information on the forums at his Canadian Soldiers website which indicate the green toorie was worn by the HLI of C on the tams as well. Although I have not owned a HLI of C tam, I did own an example with a blue toorie (SD&G Highlanders). In that particular example, the tam appeared also to be replaced by hand (field modification)

2. Although the Mackenzie tartan is the same as worn by the Seaforths and Pictou Highlanders, the orientation is different. The HLI of C wore the tartan with the red and white stripes forming a cross (with the white stripe running vertically down the middle and the red stripe running horizontally across). The Seaforths and Pictou Highlanders wore their tartan swatches with the red and white stripes running diagonally across to form an X. This can be seen in many period photos.

3. My experience in collecting these also suggests that it was fairly common for the soldiers to remove the lining from the caps.


As such, I would say with pretty good certainty that these are both HLI of C caps.

Hey, those are great Jeff!

Ledfut, thanks so much for sharing your knowledge on tams! That certainly helps cement the HLI of C connection for me. It also helps me focus my research on Bob Allen.

Nice hats. I am curious about the white marking found in the lining of the hat. I thought it may be a C arrow but it looks more like the post war Canadian marking found in web and clothing. To me this style of Tam is postwar used in Canada. The double row of stitching around the brim and smaller size are the tell tale signs. I have seen several wartime dated British made examples with this mark in them. I think the white mark in your hat is the same mark shown in the photo below but rotated about 180 degrees. 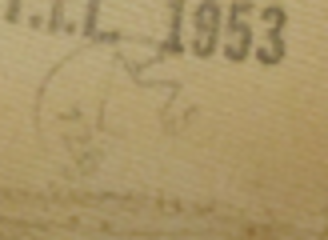 Hi Ypres,
I had wondered about the white marking when I bought them too. It does resemble the post war acceptance mark but there's just so little of the stamp left its hard to tell. Of course it could have been issued post war too. If you look in that photo just to the left, that tam is maker marked and dated.

I took a screen shot of the stamp and rotated it. I placed it beside another stamp from a 50's haversack. When you compare them there are definite similarities. Both are definitely  circles .... both have three numbers on the bottom, yours is a  395 ???, and both seem to show a stylized arrow on top of the number. I am pretty sure yours is the post war stamp. I can't completely explain the apparent 1940 date ... perhaps its 1948, 1946 ???? But I'm sure this style of tam came later ??? Mike Chappell has a discussion about the style of hat in his series of pamphlets on British army uniforms in the 20th century. The double row of stitching is highlighted below. I can't really tell but the tartan does not seem to have holes for a badge ? The tartan squares seem small to be badge backings? Is wearing the tartan and not the badge a post war practice? I also believe Canadian Scottish wore this tartan backing, but as stated by others, at a different orientation. I believe in the style of St Andrew's cross. 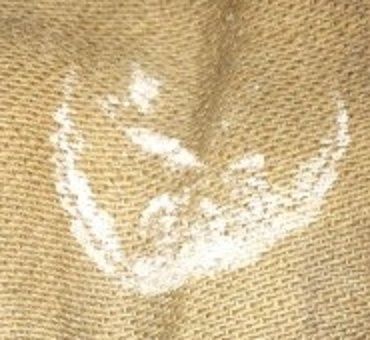 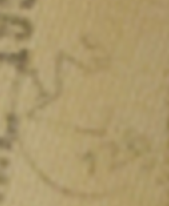 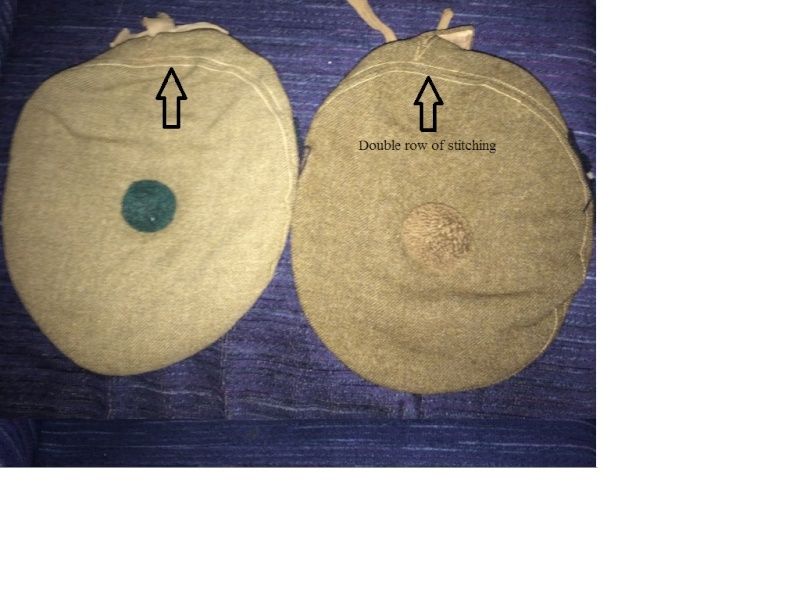 Just found a WWII cap with the double row of stitching ???? You learn something new everyday !!! Almost all the WWII Tams I have seen have no stitching there. Perhaps yours is wartime made and post war issue !!

Ypres,
I'm glad you found that tam, I was beginning to think I was losing it! I have several with the double row of stitching and the ones I looked at online last night were all double rows. That's why I inquired about it.
I will go back through the rest of mine in storage one day and look for the no stitching...perhaps particular manufacturers used differing styles.

I have one with double stitching, clearly dated 1942.
I've also some wartime pictures with Canadian soldiers wearing this Tam, they are easy to spot because the crown is smaller than the common type of Tam o shanter.
edstorey

I hope the two are not being confused in this thread as they are two different types of headdress.

I'm on this forum to learn, so please explain Ed.
ypres

I'm always ready to learn as well ... these forums are great for that

.... My present knowledge concerning these types of caps is :

A Tam is a broad flat cap with a short band and a toorie on top. It is sewn from panels of cloth.

The Balmoral bonnet is (usually) a knitted flat cap, with a deeper cap band and usually (but not always) diced. It is less broad than the tam and it also has silk ribbon tails like a glengarry.

The exception is the khaki Balmoral Bonnet which was also sewn (but is smaller and has tails).

I also believe the khaki Balmoral and the khaki Tam have at some point "Morphed" into one style and that these caps are now called Tams ?

Any further info would be welcomed .... if there is a distinction are there dress regs that state which highland units wore which ??? Anyone have a copy of the WWII regs they would share?

Rick, I had a quick look through the 1943 War Dress Regulations for the Canadian Army and the Glengarry is discussed at some length (table of types & dicing. etc) but other than a mention of the drab Tam-o-shanter in types of headdress worn with battledress, there is no detailed information on that headdress. Nor is there any mention of balmorals.
Sponsored content