was going through some of my items the other day and seen this. Obviously the bar is not in the best of condition (missing pin, stain) but what interested me was the ribbon of green, yellow and blue colour. The red blue and white ribbon is the 39-45 medal issued to commonwealth forces. I have done a bit of research and came up with nothing for the unknown ribbon. If anyone knows what ribbon it is I would love to know.
Thanks,
Beau 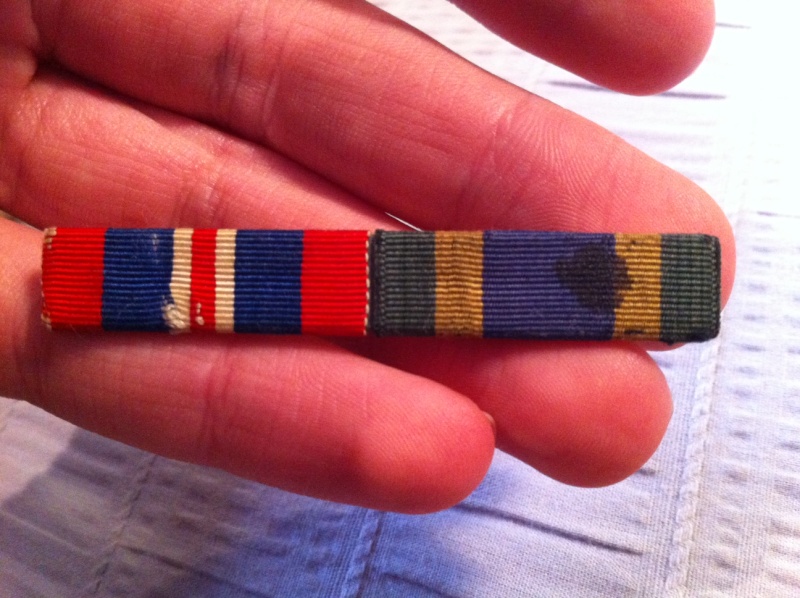 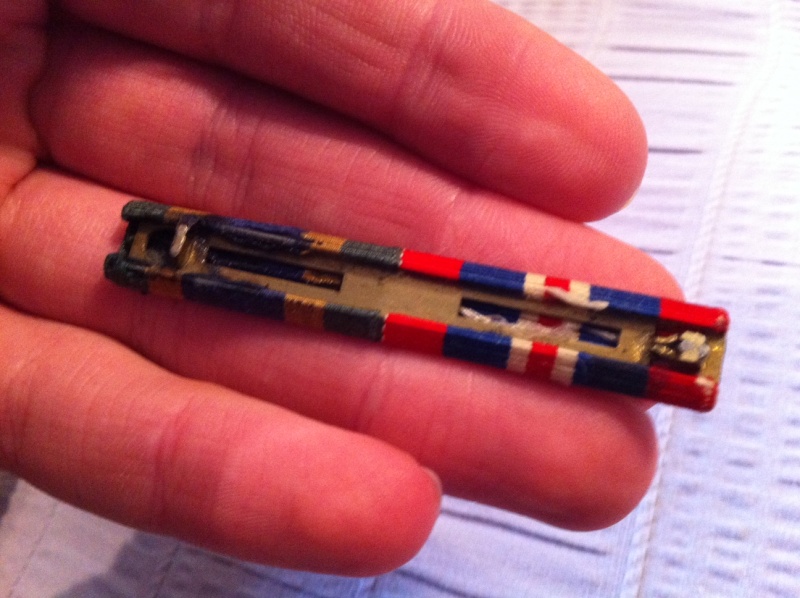 CVSM and War Medal. Common pair to a Canadian who volunteered for World War 2 service but never served outside Canada.
_________________
Cliff

Good day Cliff.  I'll preface my remarks by stating right off the bat that I am no medal expert.  That being said, I don't think that the right hand ribbon in the first picture is the CVSM.  The reason I say that is first, the colour of the inner stripe next to the blue is too yellow.  I don't think that is a faded red, because if you look at the interior of the retaining bar for the ribbon in the second picture, where you would expect it to be less faded, it still looks to be yellow.  Also the two outer stripes appear to be of different widths.  Looking at my father's CVSM, they appear to be the same width.  Having no detailed reference material, I have no idea what it might be.

My nickel's worth anyway.  More knowledgeable collectors are free to debate, argue vehemently or outright close-with-and-destroy as they choose. As I said at the beginning -- I ain't an expert.

I would happen to agree with Ian, the CVSM is a very good guess as the only difference really is the yellow colour. I have taken a very close look at the ribbon, have compared to CVSM's that I own and have determined the colour was definitely not red when it was made. I am a firm believer that this ribbon had yellow colouring from the beginning. Also thought I would add that this medal bar was bought in Canada and is most likely from a Canadian, but I also have to keep in mind that the 39-45 medal was not just awarded to Canadians but also many other commonwealth countries. Really appreciate all the comments and posts.
Thanks,
Beau
jholl72

really reminds me of the Jamaica independence medal http://www.medals.org.uk/jamaica/jamaica011.htm except the middle looks black and mine looks blue... looks like I still haven't came to a conclusive answer yet.
Thanks,
Beau
pylon1357

Well my colour vision dose suck, but I honestly don't really see it as yellow. However, It is a very long stretch but the British Guiana Exemplary police service medal is green yellow blue yellow green. At least I think it is. LOL
_________________
Cliff