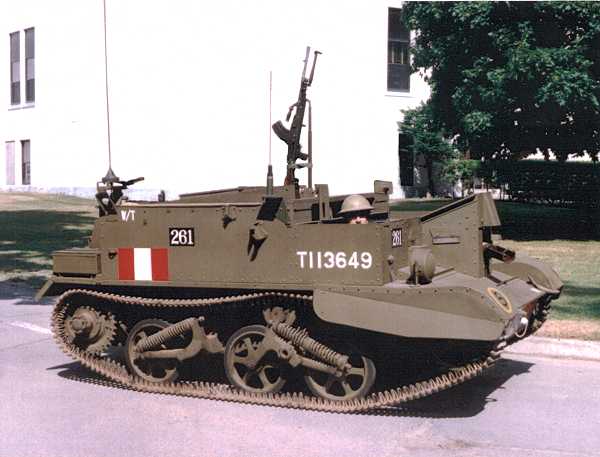 The Universal Carrier, also known as the Bren Gun Carrier is a common name describing a family of light armoured tracked vehicles built by Vickers-Armstrong. Produced between 1934 and 1960, the vehicle was used widely by Allied forces during the Second World War. Universal Carriers were usually used for transporting personnel and equipment, mostly support weapons, or as machine gun platforms. With some 113,000 built in the United Kingdom and abroad, it was the most numerous armoured fighting vehicle in history.

Design and Development
The origins of the Universal Carrier family can be traced back generally to the Carden Loyd tankettes family which was developed in the 1920s, and specifically the Mk VI tankette.

The carrier put the driver and commander at the front sitting side-by-side; the driver to the right. The engine was in the centre of the vehicle with the final drive at the rear. The suspension was a mixture of the Vickers light tanks' and Horstmann springs. Directional control was through a (vertical) steering wheel. Small turns moved the front road wheel assembly warping the track so the vehicle drifted to that side. Further movement of the wheel braked the appropriate track to give a turn.

The hull in front of the commander's position jutted forward to give room for the Bren gun (or other armament) to fire through a simple slit. To either side of the engine were two areas in which passengers could ride or stores be carried.

Initially, there were several different types of Carrier that varied slightly in design according to their purpose: "Medium Machine Gun Carrier" (the Vickers machine gun), "Bren Gun Carrier", "Scout Carrier" and "Cavalry Carrier". Production of a single model would be preferred and the Universal design appeared in 1940; this would be the most widely produced of the Carriers. It differed from the previous models in having a rectangular body shape in rear section, with more space for crew.

Production
Production began in 1934 and ended in 1960. Before the Universal design was introduced, production was by Thornycroft, Morris, Sentinel, Aveling, Bedford, and Ford UK. The Universal was produced in the UK by Aveling-Barford, Ford, Sentinel, Thornycroft, and Wolseley. By 1945 production amounted to approximately 57,000 of all variants, including some 2,400 early ones.

Operational History
Universal Carriers were issued to infantry units for carrying support weapons (initially 10, 21 by 1941, and up to 33 per battalion by 1943). Artillery units used them as a tractor for the Ordnance QF 6 pounder anti-tank gun.

Variants
* Mk. I - The original model.

* Wasp - A flamethrower-equipped variant, using the "Flame-thrower, Transportable, No 2". The Mark I had a fixed flamethrower, Mk II had the projector in the co-driver's position. Both had the fuel tank within the rear compartment. The MkIIC (C for Canadian) moved the fuel tank to the rear of the vehicle.

* 2 Pounder Anti-tank Gun Carrier (Aust) - The Carrier, Anti-tank, 2-pdr, (Aust) or Carrier, Tank Attack, 2-pdr (Aust) was a heavily modified and lengthened LP2 carrier with a fully traversable QF 2 pounder anti-tank gun mounted on a platform at the rear and the engine moved to the front left of the vehicle. Stowage was provided for 112 rounds of 2pdr ammunition. 200 were produced and used for training.

* 3 inch Mortar Carrier (Aust) - The Carrier, 3-inch Mortar (Aust) was a design based on the 2 Pounder Carrier with a 3-inch mortar mounted in place of the 2 pounder. Designed to enable the mortar to have 360 degree traverse and to be fired either from the vehicle, or dismounted. 400 were produced and were ultimately sent as military aid to the Nationalist Chinese Army.

* T-16 - The Carrier, Universal, T16, Mark I. was a significantly improved vehicle based upon those built by Ford of Canada, manufactured under Lend Lease by Ford in the United States from March 1943 to 1945. It was chiefly used by Canadian forces during the war as an artillery tractor. After the war, it was used by Swiss and Netherlands forces. It was longer than the Universal with an extra road wheel on the rear bogie, the engine was a Ford Mercury delivering the same power. Instead of the steering wheel controlling the combination brake/warp mechanism, the T-16 had track brake steering operated by levers (2 for each side).

* Praying Mantis - An experimental vehicle - the hull was replaced with an enclosed metal box structure with enough room for a driver and a gunner laying prone. This box, pivoting from the rear, could be elevated. At the top end was a machine gun turret (with two Bren guns). Invented for fighting in hedgerows, the idea was to drive the Mantis up to a wall, elevate the gun, and fire over it into the fields from safety. A Mantis survives in the Bovington Tank Museum 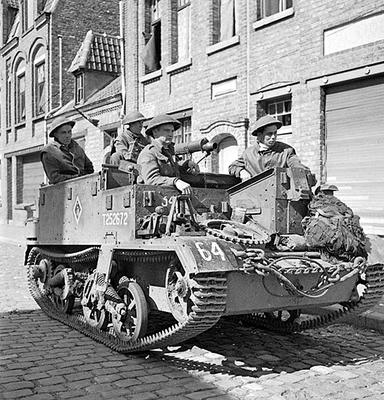 This is my first post on this forum so hello to everyone!

Just to add to the list of variants: Universal Carriers were also used by artillery regiments as Armoured Observation Posts (AOPs). Basically, they carried the forward observation team, and their equipment, including Wireless sets 19 and 18: 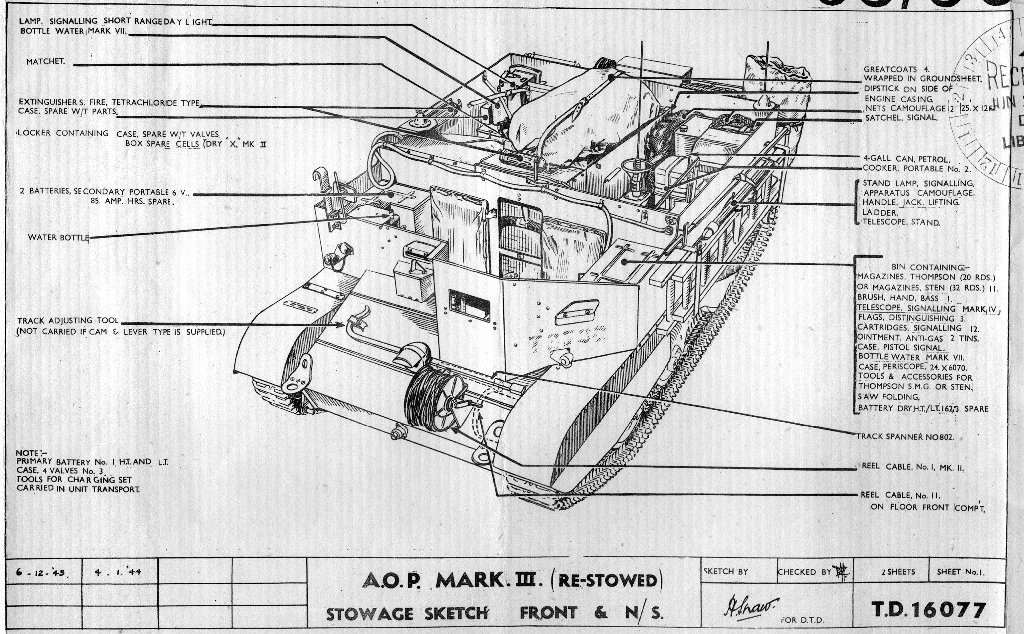 Rob wrote:This is my first post on this forum so hello to everyone!

Just to add to the list of variants: Universal Carriers were also used by artillery regiments as Armoured Observation Posts (AOPs). Basically, they carried the forward observation team, and their equipment, including Wireless sets 19 and 18:

Welcome aboard Rob! Glad to have you here.