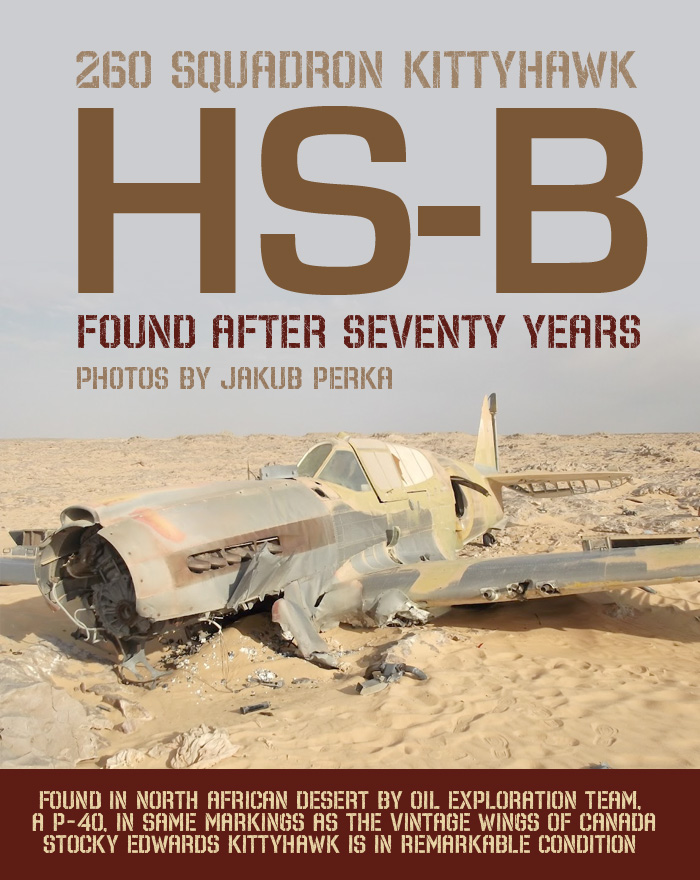 Some time in 1942, a lone Curtiss P-40 Kittyhawk bearing the 260 Squadron “HS” squadron code and the aircraft letter “B” settled down over a wide and remote expanse of North African sand desert called Al Wadi al Jadid. Perhaps low on fuel, perhaps lost, or with mechanical problems, the RAF pilot chose to land in the vast North African Sahara. With his landing gear locked down, he flared low over the sand and settled onto it. The gear snapped off, the desert camouflaged P-40 collapsed onto its belly and slid for a hundred meters or more shedding its radiators and propeller hub.

After coming to a stop, the pilot exited the aircraft, closed the canopy and disappeared into the sands of history. The aircraft itself would remain undiscovered for seven decades, perhaps for much of it covered by the sands of time, or perhaps just so far out of the way that it was not seen or at least reported until March of 2012, when an oil exploration team came across the wreck in Egypt.

Was the pilot injured? Was his wing man circling overhead when he went down? Was he rescued? Or was he lost far into the desert with no witness to his demise. Did he languish near the downed aircraft awaiting rescue? Did the pilot survive the incident and the war? Has a mystery been solved or does the story have a record? There are many questions that will be answered in the weeks and months ahead when squadron diaries and records are scanned for the crash or missing aircraft report.

One thing we have been able to determine is that the aircraft wears the identical markings of the 260 Squadron Kittyhawk that Vintage Wings of Canada used as the model to paint and commemorate our own P-40 - a Kittyhawk long ago considered to be the personal aircraft of Canadian ace and hero James Francis “Stocky” Edwards. We know that Stocky's aircraft, Serial Number FR350 was a later model Kittyhawk and that this is not it, but it is most likely the predecessor of FR350... the aircraft which it replaced in the line-up. If this is HS-B Serial Number ET574, thenwe know that Stocky Edwards did indeed fly it as well. To say we, at Vintage Wings, are excited by this find is an understatement. In the past month the warbird world has been abuzz with the yet unsubstantiated claims that an entire squadron's worth of Spitfire Mk. XIVs may be found buried in Burma. To have this second and clearly substantiated sighting of a famous warbird that appears to bear the HS-B code has us truly excited about the story which will no doubt add to the depth of the one we already tell with the Stocky Edwards P-40 Kittyhawk. 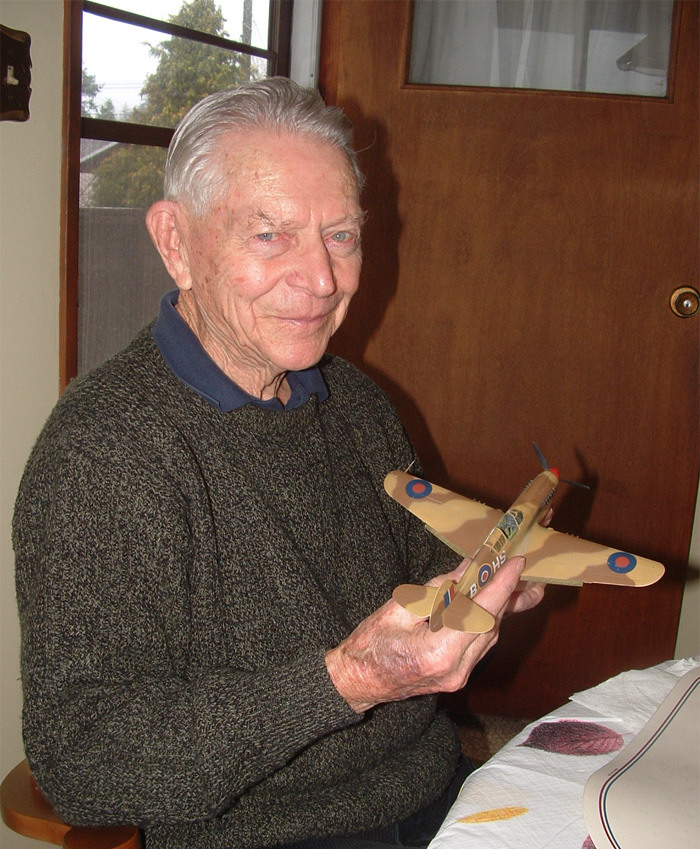 A photo taken in 2011 shows Stocky Edwards at his Vancouver Island home, holding a model of the successor HS-B to Kittyhawk ET57– Kittyhawk FR350. Stocky has confirmed that he flew both HS-B aircraft. Photo by aviation historian Pat Murphy

Since writing this small story, it seems that speculation as to the identity of this aircraft has settled around Kittyhawk ET574, lost while being ferried to a repair depot with the landing gear in a locked down position. Until this can be confirmed we will not speculate as to the identity and fate of the pilot until it is assured that his identity is positive and his family notified. Richard Allnutt and I have played with a couple of the photos to try to bring out the serial number on the back of the aircraft. On the right side, we were able to distinguish a letter “T”, a numeral “4” and part of the numeral “7”. On the left side, we can barely see the remains of a letter “E”. With these clues, we are quite certain that this will finally be identified as ET 574.

Since the discovery, the wreck has been seriously vandalized - a travesty the whole aviation world seems unable to stop. The perspex has been smashed out, bullet holes appear in the cowling and other forms of damage and theft seem to be underway.

Now that every news agency is mentioning Flight Sergeant Dennis Copping's name, we will now put it in this article. We have know since we first put this story out that is was most certainly Copping, a 24 year old son of a British dentist who went missing while ferrying this aircraft in 1942. Stocky Edwards mentions Copping in his book Kittyhawk Pilot. There are now rumours that the RAF and the Brits will try to find Copping's remains. This will undoubtedly be a difficult task.